A Tale of two QCXs

As you may know, I am a Ham Radio operator and that, among other aspects of the hobby, of which there are many, I do two things. I operate QRP (low-power) operation, mostly CW (Morse code) and I like to build electronic kits. 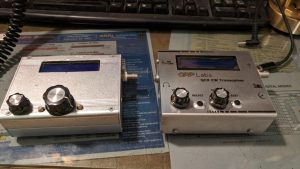 Ugly on the left. Beauty on the right.

Sometimes those things cross over.

A while ago, probably more than a year, I became aware of a neat little QRP radio kit called the QCX. It was offered for sale by a German Ham, living in Turkey, for only $50. It was a single-band, 5 watt CW radio that was pocket-sized. Slightly bigger than a pack of Canadian cigarettes.

There have been many small, inexpensive QRP radios before. I have a few. But this one was built around the little microprocessor chip found in the Arduino boards. It had a display, and the chip allowed it to do a lot of neat things that usually took place in outboard boards. For $50 buck, I had to try one.

So I did and I wrote about it before, so I won’t get into it too much. Once it was done, it needed to be put into an enclosure. So I decided to fit it into one. I got an extruded aluminum box that seemed to be the right size to do justice to the small size of the radio and I started doing what needed to make it fit inside.

Let me tell you, it might be aluminum, but extruded aluminum is tough. Tough to work on. drilling holes wasn’t too bad, but cutting big openings for the display was hard. Then there was the challenge of making the controls work. The push buttons were tiny and needed some kind of extension to reach out of the case. The two knobs – one encoder and one potentiometer, were at different lengths as well. I had to fabricate extensions for all those with my limited machine shop. (Hand tools.)

When it was done, and working, it was crude, but did the job. I built it for 40 meters. Naturally, I wanted another, so I bought on and built it for 20 meters. This time though, I bought the matching case from another company that made them for Hans.

It took a while to arrive, but came after I had completed building the second kit. It looked fantastic. I was happy that I spent the extra money rather than struggle with making my own case.

Fast forward a year. Hans, being ever busy and industrious, improved his radio and replaced the QCX with a new model called the QCX+. He also came out with a even more compact version called the QCX-mini. The plus is bigger and easier to build. The mini is smaller, comes with many surface mount components pre-installed and to make it smaller, he came up with a scheme of nesting circuit boards that increased the density while still being easy to build.

The writing on the wall, though, was the the company that sold the cases probably would not sell them forever. I decided to order one and put my original kit in a proper case to match the second one.

I ordered it in November. Then COVID hit and disrupted the world’s shipping. The first one was slow to arrive, but not unreasonably so. I patiently waited for it, but I began to fear it had gotten lost. They were shipped without tracking to save cost, so there was no way to tell. I emailed the maker, Markus, but received no reply. I imagine he got so many inquiries that he stopped responding.

So, I gave up on it. I actually went ahead and ordered two of the QCX-minis with matching cases and planned to build one of them to replace the 40 meter QCX. But they won’t be available for a while.

Then, out of the blue, the case arrived today. Hallelujah! Heere’s some photos of the transformation from my ugly box to a beautiful QCX that matches my 20 meter version. 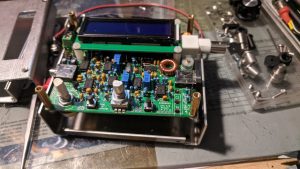 Out of the old case. Seeing if it fits the new one. 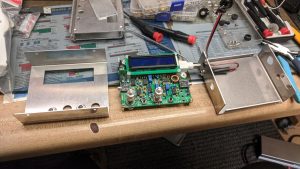 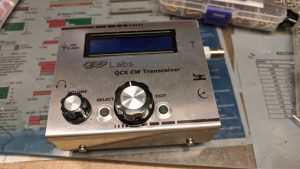 All done! I decided to keep the oversized knob I added. Maybe I’ll get one for the 20m version. 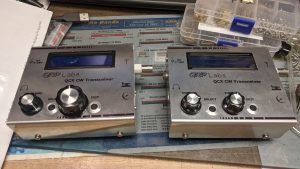