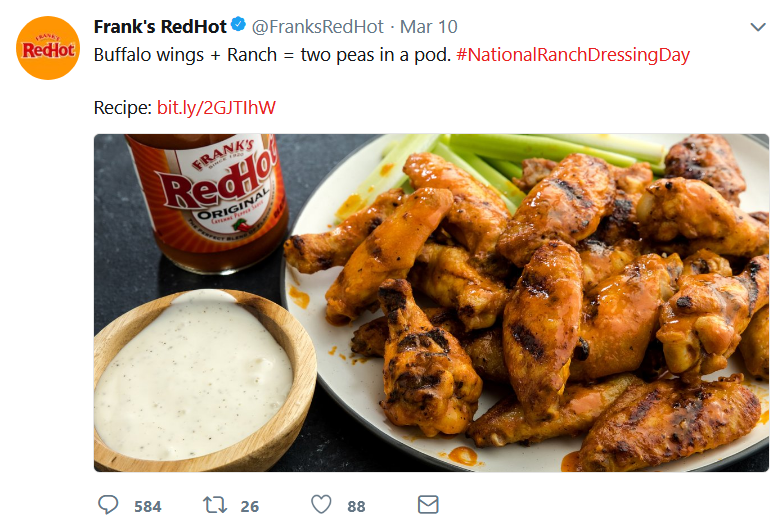 It was immediately pounced upon by the Buffalo media and followers.
WGRZ and The GUSTO section of the Buffalo News

Of course, runny Ranch Dressing just isn’t up to the job of replacing real Bleu Cheese dressing, as one tweeter recounted that his wife put out some ranch dressing at a superbowl party, and no one touched it.

But this is a long time pet peeve of mine. There are so many things wrong here that I have to set the record straight.

First of all, look at the wings in the picture. They are grilled. You can see the marks on them. That is not how true Buffalo-style Chicken Wings are cooked. You can cook chicken wings that way and they even are pretty good, but that is not how they are done in Buffalo, where they originated.

And that brings me to real fighting words. Buffalo Wings. NO, they aren’t Buffalo wings, buffaloes, the large herd animals that once roved the land, though not in Buffalo, do not have wings. They don’t fly. Chickens have wings and they don’t fly either, but that’s not why their wings are available to eat.

The correct terminology, restaurant chains be damned, is Buffalo-Style Chicken Wings. And they are deep-fried, not baked, grilled, poached, or microwaved. They are also not breaded, or batter dipped. That might be good, but it’s not Buffalo-Style.

All those things are good. I like the variety and chicken wings have almost limitless ways to prepare them. Bar-b-que sauce is awesome on them, but that is not Buffalo-style. Call it by another name.

The recipe for Buffalo Style chicken wings is simple. You take some chicken wings, deep fry them until done, just short of crispy, take them out of the oil and drain, then while still piping hot, put them into a bowl with the sauce and toss them until coated. That’s all.

The sauce is also simple. Melted butter and Franks Hot Sauce. Equal parts. If you want mild, use less Franks. Hotter, more Franks. Killer hot? Well, just add some other gourmet hot sauce. That’s it. No secret recipes. And there is nothing sacred about the Frank’s Hot Sauce. Any vinegar-based cayenne pepper hot sauce will do.

The origin of Buffalo’s Chicken Wings is contested, but most people acknowledge a Buffalo landmark, the Anchor Bar as being the source. Duff’s also is cited, and they seemed to pop up all over around the same time. If you really want to know, Wikipedia has an article.

They became popular as bar food, partly due to the low cost. Chicken wings were once a throw-away part of the chicken and mostly ended up in soup. Once Buffalo-style chicken wings were invented, ten-cent wing nights were a popular incentive bars offered their patrons. They’ve gone up a little, but are still a popular snack.

Buffalo Chicken wings are traditionally served with celery sticks on the side and a small container of Bleu Cheese dressing. Not Ranch dressing. You used to get carrot sticks as well, but that seems to have fallen out of favor for some reason.

It is my opinion, and not one that everyone shares, that the bleu cheese goes with the celery and carrots. You wouldn’t eat them plain, would you? The wings don’t need to be dipped into anything. You don’t use the dressing to cool down the hotness of the wings. Just don’t order them so hot if you can’t take it. Besides, dipping a wing into the dressing leaves a gross slimy mess when the wing sauce mixes with the dressing. No, do not put your wing in my bleu cheese dressing!

I like my wings a little hotter than most people and don’t need to dip them into anything to cool them down. Unfortunately, if I have an order of wings that hot, I usually regret it later, so I mostly go with Medium. My wife orders mild and those are good too.

Some places offer a multitude of hottness levels. Quaker Steak and Lube, for instance. They offer them on a scale from mildest to hottest with names like “suicide” and “atomic.” I once ordered their “Buffalo” hotness out of curiosity. It was ranked above the middle and seemed like they considered it fairly hot.  I got them and they were what I’d call a good solid Medium. Enough that your lips burned for a minute, but nowhere near as hot as I expected.

So there you have it, my pet peeves about chicken wings from someone living near Buffalo. To sum it up: Bleu Cheese not Ranch. The dressing is for the vegetables, which should include carrot sticks, and to be Buffalo-Style, the chicken wings must be deep-fried in oil and coated with butter and hot sauce.

BUFFALOES DO NOT FLY – THEY DON’T HAVE WINGS!