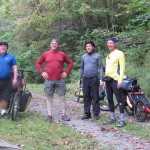 Just a quick message from the Greenbriar Trail in WV. Four days of biking and camping start now!

…and finished after two.

I enjoyed the night camping and it was great to meet my friends again, but by noon on Friday, it was apparent that I had grossly misjudged the trail.

The majority of the Greenbriar Trail is a gravel double-track with grass in the middle and sides. Think of a set of tire tracks left by a truck. No matter what I did, I was always riding with at a minimum of two, and often four, wheels in the grass. Gravel is enough of a handicap, but that was too much.

When we broke for lunch and discussed what the plan was, I realized, it was just as far to where we planned on camping as it was back to the start. But going back was a slight downhill. I thought about two more days of the type of riding I was doing and took two Ibuprofin and headed back to the parking lot. 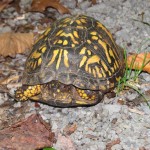 At one point, I was going so slow, I was unable to catch up to or pass a jogger. I stopped several times, but the last time, just two miles from my truck, I finally had a good 4G signal on my phone (as opposed to none almost everywhere else.) and went to Hotels.com and booked a room in Lewisburg for the night.

I did get to the Marlinton Roadkill Festival, the centerpiece of our trip. I drove up Saturday morning and enjoyed the festivities. The rest of the group made it there by bike, but were also cutting it short because of the trail. They didn’t go as far as planned Friday night, which made a longer ride to Marlinton in the morning. They also decided not to go on from there, but to head back towards the start, doing it with the two days left.

I drove home directly from the roadkill festival, following Route 219, not the fastest way, but very scenic, until the sun went down. I made good time anyway, and arrived home by midnight.