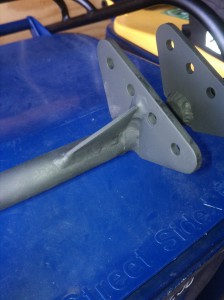 The seat is fixed!

My friend Ken Handley took the seat frame and had it welded for me. He put a reinforcement inside the tubing and added gussets below the point where the tubing meets the bracket. I’m confident in saying it’s much stronger now than it ever was.

He even had a nice flat black coat of paint put on it, saving me from having to do that.

I have the seat all back together and on the trike. I’m hoping to do a short test ride tonight to make sure it’s all fine. I did some work on the rear derailleur and may need to do some tweaking with that. 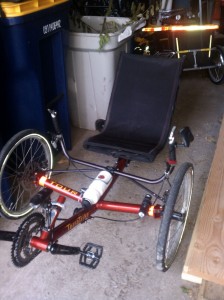 Update: April 2013. I just was working on the trike and had the mesh seat cover off again to clean it. The frame with the weld job looks great, except that some of the paint had worn off where the mesh seat rubs it. I painted it again, just a small area in the middle. I think the original paint was a powder coat that probably adhered much better.

Actually, I’m thinking of covering the whole cross bar of the frame with some foam pipe insulation. It’s kind of a hard spot that I almost sit on, so some padding there might help.