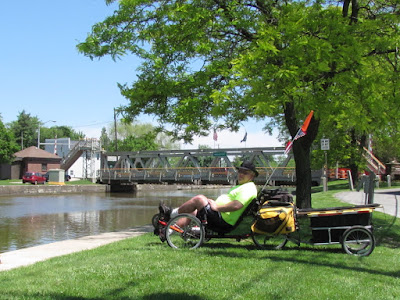 Okay almost all bike tour blogs start out with the information everyone wants to know and look through and say they’d never do that.

Terratrike Tour, several years old.
TW Bents Trailer – two wheel model. No longer made.
Arkel RT-60 Panniers They hold a lot. Too much sometimes.
Nashbar Trunk Bag Don’t ask what model, I don’t remember. It holds a lot of junk and I usually have it on all the time. Tools, sunscreen, camera, etc. all go in it.

A Home Depot plastic bin, yellow lid, black box with multiple strips of reflective material applied. Lots of room for gear in there, besides the electrical system. I was looking for a Rubbermaid tub, but couldn’t find one the right size. This one is stronger, cheaper, and fits the trailer perfectly.
Harbor Freight 15W solar panel in custom aluminum frame that straps on top of the box.
This charges a 22AH 12V SLA battery. Charge controller, circuit breaker and interconnections to keep the panel charging the battery. I plan on replacing this with a custom solar panel made from multi-crystalline cells in a frame that will fit into the recess in the top of the bin. That way, I won’t need to tie it down on top. The multi-crystalline cells are more efficient and I can get more power in less space.
West Mountain Radio RigRunner 4004USB power distribution block. Breaks out power into separate fused circuits and two USB outlets for charging devices. Anderson Powerpole connectors used for all other 12V connections.
An old Radio Shack 300W DC-AC inverter to give me some terribly inefficient 110VAC power.
A Maha MH-C401FS charger for NiMh AA/AAA cells. Selected because it works off 12VDC.
Several sets of Eneloop AA and AAA Low-self-discharge NiMh batteries. These power the lights and my camera. The ability to charge them onboard is huge.
12V cigarette-lighter style outlet for those accessories so designed to plug in to a car lighter socket.

Dinotte 140R tailight. Brightest taillight made. Gets noticed in bright daylight and gets respect from car drivers.
A custom homebrew battery eliminator for the Dinotte light. The Dinotte usually runs off 4 AA cells, but I made up a little box with a DC-DC converter to supply 6.5V to the light from the 12V solar system. I have a power line from the trailer up to the back of the seat to bring 12V to the bike.
I also customized a cigarette lighter USB adapter by adding a pigtail with an Anderson Powerpole connector. This can power/charge my cell phone while in the trunk bag.
Cateye TLD-1100 backup tailight. Not as intensely bright, as the Dinotte, but for sheer volume of light produced by all it’s LEDs, a reasonable backup. When the bracket doesn’t break.
Planet Bike Blaze 1/2 Watt headlight on a Terracycle accessory bracket. Nice bright battery light with a blink mode that’s useful to get noticed by cars.
Coleman LED flashlight (WalMart) in a Ebay bike mount.

Eureka 2-man tent Because that’s how much space one person needs to be comfortable.
Therm-a-rest Prolite Plus sleeping pad. Small, but it works.
Eureka Silver City sleeping bag. It’s a good bag, mummy-style, but a tad too small for me and I hate mummy style bags. I got it because it packs down to the size of a football. I mostly lay on top of it, or just stick my feet in because that’s all you need in summer.
A couple cheap fleece blankets from the supermarket. For while I’m laying on top of the sleeping bag.
Someday, I’ll get around to finding a summer-weight rectangular bag that packs nearly as small.
MSR Whisperlite stove. Along with a MSR Bottle of fuel. For cooking stuff. Multi-fuel, so I can find something to use in it anywhere.
MSR Cook Set. Yeah, pans cups dishes all fold up into the biggest pan.
Seems like I’m forgetting something here. I’ll add it later.

Droid Incredible Rooted so I can tether for data. Not just communications, but GPS as well.
Acer Aspire One netbook. So I can keep this blog going.
Canon Powershot SX-120is camera Photos. Better than the phone camera. Controls that function like my DSLR. Passable video, if you don’t care about sound. Or image stability. Or focus.
Creative Zen Vplus MP3 player Size of a matchbook. 8GB of tunes.
Baofeng UV5-R Dual-Band Transceiver In case I want to talk to the local Hams.
Small Wonder Labs SW40 QRP Transceiver, Hendricks SOTA Tuner, Palm Mini-paddles Pretty much a tiny Ham station. For longer-distance CW communications. Great camping activity.

The Arkel panniers are pretty water-tight, but not totally waterproof. You probably can say the same for the plastic bin.

Most of the camping gear comes in some sort of stuff sack and has varying levels of water resistance. For instance, the tent is in a nylon bag that isn’t waterproof, but water won’t hurt a tent. Just the opposite, you want the tent to dry if you packed it while damp.

My sleeping bag is in a compression bag that, when cinched down, probably makes it about as absorptive as a rock. Unless you drop it in a river, it won’t be bothered by a few drops.

Clothing will be packed in dry bags inside the panniers. Most cycling clothing dries quickly as well.

The various bits and pieces of hardware inside the bin are packed inside several shoebox-sized plastic containers that add a second layer of protection as well as keeping them from rolling around inside the bin. The sensitive stuff, like radios, are kept in a set of “Lock-n-Lock” containers that have a gasket seal and could probably be dropped into a river with no leaks. If they didn’t float away… My netbook is only in a sleeve, but it will be a good candidate for a freezer-size zip-lock bag. Zip lock bags are the cheap and dirty tool for camping.

Many other things just don’t matter. The camp stove, the tent poles, the spare bike tires and tubes and things like that just don’t care if they get wet. The heavy, power handling side of the solar power system is inside the bin and should be safe, but a little water won’t hurt it either as it’s designed for outdoor use. Contrary to what you see on TV, at 12 volts, water is almost a perfect insulator. At least for a short time.