As promised, I will write about the trip to the Great Allegheny Passage I took back in May. And a great way to start off the story is this video. Several people had video cameras and Robert “Bean” Blanda took them and edited them into a little piece that captures the trip’s feel perfectly.

The trip began on Wednesday, where we all met in Ohiopyle PA and camped in the Kentuck Campground, just out of town. Ohiopyle is a tiny little town best-known for it’s whitewater rafting and kayaking on the Youghiogheny River that passes by. But it also benefits from the proximity of the Great Allegheny Passage, which is a hiking and biking trail that runs along an old railbed that paralells the river. It runs from Pittsburgh to Cumberland MD, where it connects with the C&O Trail.

If you were to take the point where Pennsylvania’s border comes together with Maryland and West Virginia, then go straight north about 5 miles, that’s where Ohiopyle is. I realized when I got off the expressway and onto local roads, that I had been there before. It’s the same area where I had been to for skiing at Seven Springs some years earlier. I recognized the signs at the exit!

We would be riding from East to West, towards Pittsburgh for two days, then turn around and ride back to Ohiopyle. 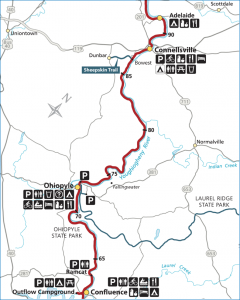 That night was a meet up and get ready for the ride in the morning session. Most of the group camped there, either in one of several yurts they had rented or on tent camp sites. I went with the tent site. A couple of people stayed at a B&B in town and we’d see them in the morning.

So, how did I hook up with this group? They were from all over, New Jersey, Ohio, West Virginia, Michigan, and more. We were all ages and I was not the oldest one! The answer is, the internet. They formed the group in 2011 and had a small, successful trip then, a couple more in 2012, and it kept growing. Word got out and they started a website, bikepacking.us and a Facebook page. I’m not sure where I first heard about it, but it may have been mentioned on the Bentrider Forums. I wanted to go on the fall trip last year, but the stars didn’t align and it didn’t happen.

So how did such a diverse group get along? Surprisingly well. After all we all had many things in common already. But the first night was spent getting acquainted and relaxing. A few (quite a few) libations were consumed around the campfire before turning in.

The campground was a typical state-park campground. Shower and toilet facilities were close-by and the tent camping sites were right across from the yurts (small, circular, tent-like buildings on platforms that worked as a floor) so the group was all together. The park was not busy so there were only a few others around us.

We woke in the morning to rain. Some thunderstorms passed through during the night, but it was just a steady rain by morning. I hunkered down in my tent until the last minute, hoping it would let up, but finally the nearest camper was tearing down his gear, so I started to get up and ready. By the time I was packed up and ready to go, most of the group had already left. The plan was to meet in Ohiopyle for breakfast, then ride.

I caught up with the group at the Ohiopyle Bakery and got in line for some breakfast. It was a little shop and the one guy working there was swamped with our orders. But he took it calmly and efficiently and eventually, we all got served.

The weather forecast said the rain would let up by 10am, so we decided to wait it out. We went down the street to another, larger, shop and dallied around drinking coffee. Eventually, the rain did stop and the sun even threatened to come out. It was time to go.

I drove over to a parking lot next to the trail and the old railroad station, which is now a information center/museum. I unpacked the bike and hooked up the trailer and got everything set up to go. The only problem was, that lot was not the lot we were allowed to leave our vehicles overnight in. But some of our group was waiting there and would watch my bike.

I drove over to the lot. The rest of our group was getting set up there. I parked and made the long walk back to where I left the bike. I really wasn’t sure which direction we were going on the trail, but as it turns out, I rode across a bridge and came out next to the long-term lot and the rest of the group. A little extra exploring, but the bridge and train station was worth it.

Finally, after what seemed like a long wait, everyone was there and we headed out. What a crew. We had about 20 people on all types of bikes. Many used trailers, most had some sort of rack and panniers. Quite a few were on recumbent trikes and a few 2-wheeled ‘bents as well. Fortunately, the trail was accommodating to all of them.

As we rode out, the further we went, the nicer it got. The sun came out and the trail dried out. There was little problem with puddles or mud. Oh, we dodged a few wet spots, but it was no problem. One thing the rain did, was make the little springs and streams along the trail very picturesque. Since the old railbed followed the river, it was in the river valley. We had the river on our right and a cliff on the left where the right of way was cut into the hillside.

There were so many pretty little waterfalls, that eventually, I stopped taking pictures of them.

This section of the trail was deeply covered by foliage and the trees on both sides made plenty of shade. There was no risk of sunburn here.

Much of the ride was uneventful. I’d stop to look at something and some of our group would ride by. Later, I’d ride by them as they stopped on the trail. Sometimes we’d ride together and chat. Other times I’d ride in solitude. The pace was comfortable, no rush, we only had 30 miles and all day to do it.

Occasionally, you’d ride near a little town and see some buildings through the trees. When it happened more frequently, eventually I came into a little town: Connelsville. They routed the trail through the town by making a little, segregated bikepath along the streets. It felt weird riding with the road on my right. But there was a curb separating the path from the road. At every cross street there was stops signs for the path.

At the main street, right on the corner next to the path was a bike shop. I stopped in to see what they had. I didn’t need anything, so I looked around a while and left. I wanted to find a grocery store, but didn’t see any. The closest thing I found was a convenience store at a gas station a few blocks up the main drag. Yes, I left the GAP trail and struck out into traffic. Take that, whoever designed the bike lane! I didn’t find what I wanted, but picked up some granola/breakfast bar type things and some Gatorade and a bottle of Pepsi. The ice cold Pepsi sure felt good at that point. 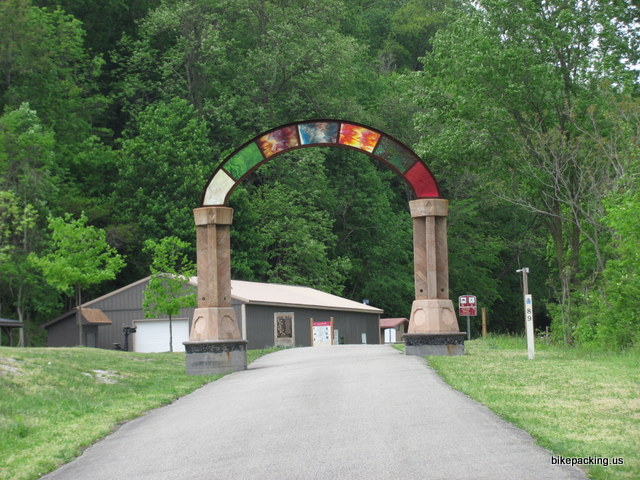 As I left Connelsville after wandering around a bit to see the town before getting back onto the path, there was a series of parks centered on the GAP trail. The town certainly embraced their role as a trail town. One had a bandstand and must have hosted music shows at times. On the outskirts of the town, another area offered free camping for the GAP travelers.

But we weren’t staying there. Our destination was still a few more miles down the road, a place called River Bend Campground. After my meandering around Connelsville, I no longer was with any of the group. I suspected all but a few were ahead of me. I hoped the campground was well marked from the trail.

The trail changed from here on. It was no longer in the overgrown forest, but now had more open space around. It also wandered further away from the river and at times, you couldn’t tell if it was still off to the right. It was more developed in places too, going through not quite suburbia, but definitely residential areas with huge areas of mowed grass and local roads going to the homes there. I passed through several small towns, villages really, with homes and an occasional small industrial building, but no sign of shops or commerce. All that must have been far from the trail.

At one point I became sure I had made a wrong turn or gotten off onto a side trail. The signs changed and the name on them was different, although I saw no place where I could have made a choice. Looking at my odometer, I was sure I had gone far enough past Connelsville that I would have found the campground by now. So, I turned back.

Fortunately, I soon ran into two riders that were likely the stragglers of the group. Peter and Judy, both trike riders and both pulling trailers like me, were riding at a comfortable, though considerably slower pace than the main part of the group. I had ridden with them for bits of the trail, then went ahead with others. They also were repeat GAP trail visitors and knew where we were going, so once they reassured me that I wasn’t lost, I resumed the ride in the proper direction. Fortunately, I didn’t double back far.

When I got to the campground, I found that you really couldn’t miss it. I was a large RV campground with house-trailer sized RV’s that went on for half a mile, but they also catered to hiker/bikers along the trail. There was a nice office building with a store and cafe and there was another building with a pool and shower facilities. I checked in and found our whole group was signed in, I just needed to pay $9. The showers alone were worth it! 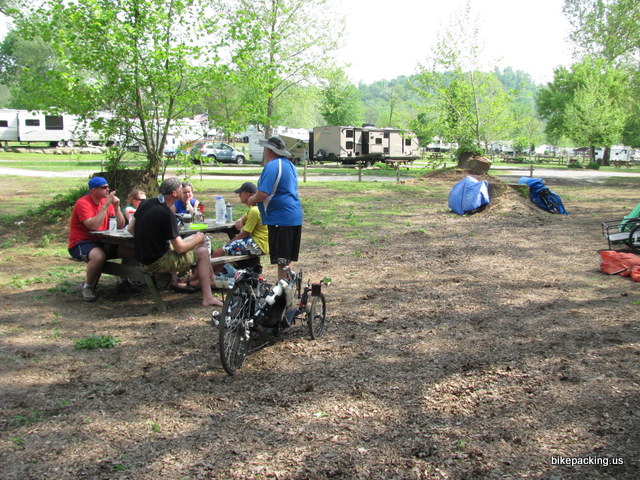 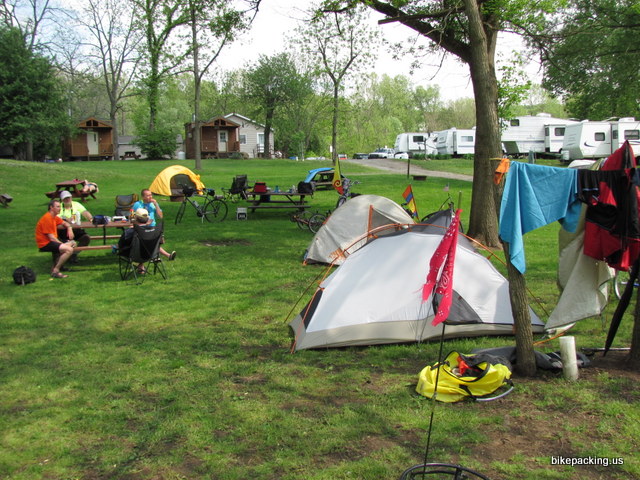