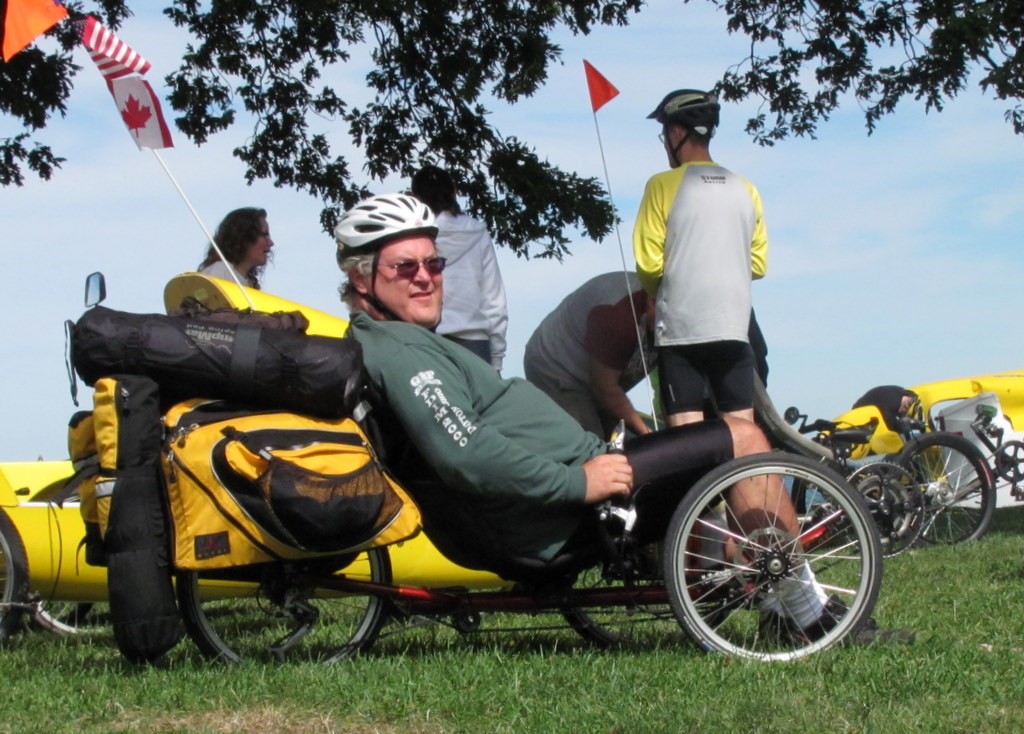 I’m working on a project that I’ve been thinking about for a while now. I’ve mentioned it to a few close friends and my wife thinks I’m nuts, I’m sure, but it’s something I’ve wanted to do for a long time.

What is it? To do a long-distance cycling trip.

So, before I go off and do it, I’m going to put out my idea before everyone here in the hinternets so you’ll know what I’m doing, maybe understand it a bit and follow along as I progress.

I don’t yet know where I am going. I don’t know if I’ll ever know that, or if I’ll just wander. I have several directions I’d like to go. Some are shorter and may make sense as a first trip. Others are more ambitious.

Where would I want to go?

1. I thought I’d like to do a sort of southerly route that wandered a bit to hit places like Nashville, Memphis, Austin and whatever is in-between. Call it my music tour.

2. I’d like to go west (young man) and cross the Rockies and see California. That’s a long ride, but there are plenty of well-mapped routes with places to stop and people used to seeing touring cyclists along the way.

3. Washington DC. I’ve recently found a well-planned route of bike trails that could take me all the way there. Between the Pittsburgh Spur of the Adventure Cycling Association and the Great Allegheny Passage (GAP) which ties into the C&O Canal Towpath in DC. This sounds like a fairly safe trial run.

Almost anywhere I go, there is a trail map that is organized by the ACA. For instance, pieces of several of their trails could be used for my “Music” tour.

I’m hoping to be able to combine a combination of camping and the occasional hotel stay, for instance in bad weather, for accomodations, But I want to do it without loosing my communications. I want to be able to blog, to get email, to share photos and all the things I do from home or from a hotel.

I hope to be writing about it as it progresses here and of course teasing along on Twitter and Facebook as well, so I guess it’s important to let you all know what is happening ahead of time.

To support this mobile connectivity, I hope to be able to bring along some technology: a cellphone, my netbook and I’m thinking about some Ham Radio equipment that will both report my position automatically and let me talk to and meet local Hams along the way.

All that technology takes power and if I’m not staying in a motel or even a paid campground every night, recharging all that is a problem. I’m working on the solution to that. I’ll be towing a small bike trailer with a solar power supply in it. Well, it will also carry a lot of the “stuff” I need for camping as well, but a battery, solar regulator and panel will be an integral part of it. Pieces are on order and I should be building it up soon.

This isn’t unheard of, nor is it totally new technology. Back in the late ’80s, I remember a fellow, Steve Roberts, who rode through this area on his way around the country on his recumbent pulling a trailer full of electronics. He later wrote a book on the subject, which I have a copy of here somewhere, if I could only find it. It was pretty radical at the time, but so much easier today with cell-phone data networks everywhere and GPS built into the phones. And I don’t want to get that crazy with it.

What I have in mind is much simpler, mostly just a mobile charging system for a battery just big enough to run some battery chargers for all the devices and maybe have enough left over for a light or two while camping. Just the lights on the bike for safety are enough to want to be able to recharge, although they can all run off AA disposable batteries, I much prefer the rechargeables I normally use.

I’ve read a number of online accounts by people who have ridden across the country and they’ve all been quite the adventures. Some more than others, depending on how much the writers share about themselves during the process. A couple have been very memorable. The latest one I’ve followed took place just last summer with a couple, Ken and Jen, who rode from North Carolina to Oregon on their trikes. They’re now taking the winter “off” while working and skiing in Colorado.

Their ride was part a memorial to Jen’s Daughter, Alex, who died after being hit by a car and who was an organ donor, and to promote their local organ donation organization. After reading their near-daily postings, I felt like I knew them like an old friend. In fact, I had shared, vicariously, an important part of their lives.

With a son who is an organ transplant recipient, and another who is in need of a transplant, if I could do the same in some small way, it would be a huge plus as well. Sure, this is something I want to do for my own enjoyment, but helping a good cause would be a big plus as well.

All that needs to be worked out too. For the meantime, this is just something I want to do, that I couldn’t do while I was tied up with work and family in the past, and that I probably won’t be physically able to do any later in life. It’s now or never.

So as I plan and as plans develop, I’ll be writing about it here. Whether it fizzles out or turns into a grand adventure, not even I know at this point. But I’ll let you know, if you care to read about it, here. Your support and encouragement will be appreciated!

I’ve made a link to just posts about this subject at the top of the blog page. right now, it’s simply Cycle Tour, but I’m hoping a better category title will come along during it’s development. I hope at some point a clever title will just pop and I’ll change it to that. But you can use that link to skip all the other random stuff.