↓ Skip to Main Content
Home › Cycling › End of an experiment

End of an experiment 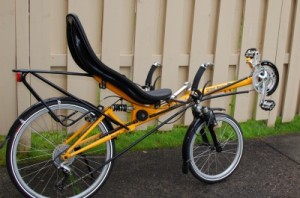 Imagine riding a regular bike with your feet crossed over the handlebars and your fingers entwined behind your head. That’s what riding this is like.

Goodbye Streetmachine. I really wanted to love you. I pictured myself gliding along on you like a bird in the wind. I could hear the comments as I passed people: “Wow, what a cool bike!” “What is that?” I imagined effortlessly keeping up with the other two-wheel riders on their diamond frames.

But it wasn’t meant to be, I guess.

My first time out, I took it to a large parking lot and used the open space. After two flops, I finally got up on the pedals and rode around. I got so I could go up and down an aisle in the parking lot, as long as there was nothing moving near me. Steering it was strange. No amount of turning the handlebars did anything, other than try to dump me off it. You had to lean, then turn and hope it went where you wanted, when you wanted.

Later, feeling like I was ready for more of a challenge, I went to the bike path near UB Amherst. I rode down the path, a little wobbly, but did okay. Until I came to other traffic. I was coming up behind a runner and another bike was coming towards me. I couldn’t pass the runner until the bike went by, but the timing was all wrong and I had to slow way down. Slowing down meant losing all ability to balance, something that probably would have improved with more experience, but I wasn’t ready. I hit the brakes, stopped, and involuntarily said “I can’t ride that slow.” The startled runner gave me a look and I explained that I was new to the bike and probably should have training wheels, or something like that.

My best ride on it was on the Clarence Bike path. Long, straight and only occasional crossroads, it was the perfect place to get some practice in. I rode about 5 miles that day, but was never comfortable. Even on the straight path, controlling it was hard. It seemed to go where I looked, not where I steered or wanted. I once slipped up and as I was looking at an oncoming rider, started to veer towards her. I clumsily corrected, but not before I scared her half to death. I cut the ride short as my legs were getting sore. The effort of keeping my feet up on those high pedals constantly so they didn’t fall off was as tiring as riding. Maybe a shorter boom position would have helped, but I decided to try clipless pedals.

I’ve been a Crank Brothers user since I put them on my Terratrike Tour, so I picked up a set of Candy pedals, the least expensive version they make and a good basic pedal. I put them on the bike and made a return trip to Clarence and the bike path there.

I don’t know what was going on that day, but I just couldn’t get going. I even had trouble getting one leg over the bike and sitting down. I got one foot clipped in and pushed off, having no intention of clipping in the second foot, just riding at first. The bike immediately decided to go 90 degrees to what I wanted and into the grass. Well, that’s fine. I can still straighten out. Maybe. No. It dumped me right off on the grass, wounding mostly just my pride.

But it was that moment that I decided that I wasn’t having fun. I don’t care if I can get used to it in a couple hundred miles, as some of the online advice I got said. I don’t want to wait that long. And there was no way that I would take this into traffic and ride on a road any time soon. I decided to sell the bike and put the money into a Long Wheel Base LWB recumbent. Something that is more stable and lower center of gravity. I’ve test ridden them in the past and just know I could handle one of them.

And I still have my trike to ride and still enjoy doing so.

I got home and put the bike up for sale on the Bentrider forums classifieds. I immediately got action – a couple offers of trades and two outright buyers. The first one got it and we worked out the details quickly. The bike is now on it’s way to Austin TX. 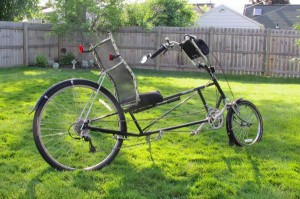 So what will I replace it with? I had a Easy Racers Tour Easy in mind. I had seen one on Craig’s list in Amherst at the right price, but the person isn’t answering their ad. Maybe they are on vacation. I’ll give them a bit. 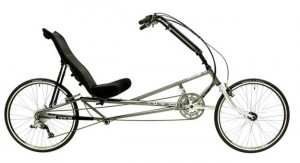 Another possible bike to consider is the RANS Stratus XP. Found used in the same price range pretty regularily, it’s a good bike too. 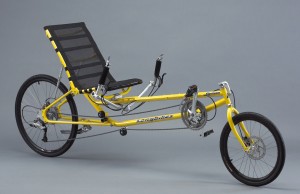 Another suggestion I received for a LWB bike that is stable and comfortable is the Longbikes Slipstream. (These names are sounding like aircraft, aren’t they? RANS actually does make airplanes!)

This is kind of the Cadillac of the category (unless you get into titanium, or carbon fiber) and has a lot of features I like. It’s not something i’m going to find a deal on a used model, though. With a price tag of over $3000, I will have to think very long and hard about one.

There are a lot of pluses in it’s favor: exceptional workmanship, 300 lb. rating, very adjustable seat, disc brakes standard, top of the line components, under seat steering, and on and on. Going through the list of options, there are only a few I need and they are not bank-breakers.

I’m not in a rush to decide, but summer is going by quickly. Maybe I’ll hear from the Craigs list guy. Maybe some other deal will pop up. I think one thing I need to do is take a trip down to Bicycle Man in Alfred and talk to Peter to see what he’s got.

3 comments on “End of an experiment”