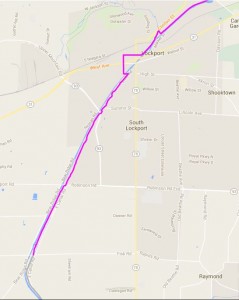 Finally got out for my first real ride of the season today. Sunny and in the low 50’s I had to ride because it looks like rain for the rest of the week. I took the Expedition out thinking I’d just ride around the city to work the kinks out and then head home.

I ended up following the new section of the Erie Canalway Trail from Lockport (NY) to Pendleton. It’s not officially open yet (the ribbon-cutting ceremony hasn’t been held) but was finished last summer/fall.
Since it is brand new, it is in perfect shape and was a nice ride. Well, almost perfect. I saw four discarded tires, neatly arranged in a square, but still dumped nonetheless. Maybe someone will make planters out of them? There was also some crudely-drawn graffiti of male parts that looked kind of like dog-bones. This is why we don’t have nice things…

That little zig-zag bit on the map is in Lockport where the trail uses city streets to connect from the end of the new section to the locks area of the canal. I was concerned with the treatment of the route using bike lanes, so I rode along it from the locks to the new trail. It is well marked and uses a mixture of bike lanes and sharrows to indicate the cycling route. Much of the way where there is on-street parking is marked with shared lane markings or “sharrows.” Thankfully, they did not put a bike lane next to parked cars in the door zone.

The only thing wrong was the placement of the sharrows, and that’s just my opinion. I’m sure they did it exactly by the book. Sharrows – shared lane markings – are a guide to cyclists that they may use the lane to ride in. They are also a notice to motor vehicle drivers that cyclists are likely to be using the road there. My disagreement is in the position of the markings. They should be in the center of the effective lane where they are most visible to both cyclists and autos. They were placed to the right in the lane, next to the parked cars, as if they were indicating cyclists should ride next to the cars. That is wrong and a dangerous placement. If a car door is opened at the wrong moment, it could either hit a cyclist, or cause them to swerve into the path of another vehicle.

Sharrows do not denote the place in the road a cyclist should ride. They designate that the entire lane is available for cycling and should be in the middle of the lane. Incidentally, that is no different than what the law says without the sharrows 95% of the time.

The last two blocks of the on-street portion has bike lanes painted, but there is no parking on those streets, so they are marginally useful. The street is just wide enough to support two lanes plus two bike lanes, but the bike lanes are just barely wide enough.

I suppose it’s not too bad, but I still wonder why they didn’t think to have it run down State Road, a more direct route. Perhaps because a signal light would be needed at Transit and they just took that light out a few years ago when they made State one-way for a block. The chosen route is low-traffic and they probably think of it as safer, but a more direct route would be less confusing, need less signage, and why do they treat cyclists like incompetents that can’t negotiate a little traffic?

I only saw a few walkers, dog-walkers and one cyclist. The cyclist, on a beat-up department store mountain bike commented as I went by “All you need is a beer holder and you’d be all set.”

When I passed him previously, going the other way, he was pushing it up to a bench because it was either broken down, or he was winded on the nearly flat trail. What gives a guy riding a beater bike the attitude of superiority to make a comment like that because I’m riding the ‘weird’ bike? Maybe he was jealous!

Anyway, I rode the length of the new section of trail and got in 9.8 miles by the time I got home. Not much, but more than I intended for a first ride. Longer rides will come soon.