↓ Skip to Main Content
Home › Cycling › How many speeds does that have?

How many speeds does that have?

The first question many people ask about a bicycle is “How many speeds does it have?” 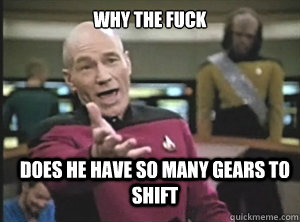 I don’t think they realize that question really shows their ignorance about bicycles. I usually answer “Three in front and nine in back.” but what they really want to hear is “Twenty-seven.” I think in the future, I’ll just say “Infinite.”

Most bikes are driven by a gear that you turn with the pedals, connected to a gear at the back wheel by a chain. It’s a simple machine and the distance you travel when you turn the cranks – those things the pedals are attached to – depends on several things.

You might think “Well, I want to go fast, let’s make me go a long way with each turn of the pedals!” We can do that, but you’ll have a really hard time getting started and up to speed. Certain racing bikes, those used for time trials or track events, are like that.

But you might change your mind after trying it and say “I want something easy to pedal and I want it to be easy to go up that big hill.” We can do that too. You’ll be able to start out easily and climb a hill with ease, but you won’t be going very fast. In fact, you might feel like you are spinning you legs off on level ground just to keep moving.

What is the answer? Single speed bikes are a compromise between the two. They take a reasonable amount of effort to get going, but can be ridden along at a reasonable speed on level ground. But you still might feel like you’re spinning like crazy going down a hill, or have to get off and walk the bike up a hill. 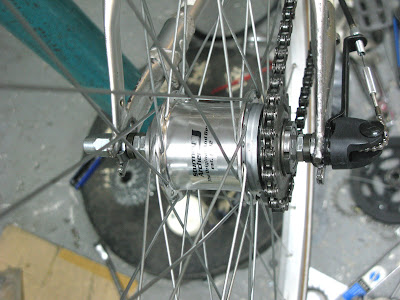 That is the reason they offer bikes with multiple speeds or gears. “Speeds” is really a bad term. The speed the bike travels is dependent on so many things other than the gearing that it’s misleading. But that’s what everyone says and we’re stuck with it.

The simplest solution and the first I even encountered as a kid was the 3-speed internal geared hub. Sturmey-Archer was the famous manufacturer, but they are made by many others and still available today. A set of planetary gears inside the rear wheel hubs allowed you to choose from three different ratios to ride with. The nice thing about these was you could shift them at any time using the little lever usually on the handlebars. They would shift gears when you coasted. If you kept pressure on them, they usually stuck in the present gear until you relaxed the pedal pressure. Not hard to get used to an quite easy to master. The basic gear ratio was usually 1:1, the same as if there were no gears in the hub. Two other ratios were there, allowing you to go faster or slower.

They worked well, and were almost maintence-free. A little oil cap was provided to add oil once in a while, but I doubt many people ever did. Most of these bikes I saw as a child were broken because the cable mechanism to change the gear got broken. It didn’t stop them from being ridden like a single-speed bike, though.

Internal gear hubs are available today in many numbers of “gears.” I know I’ve seen an eight-speed rear hub and they make 2-speed front drives as well. I believe someone makes a continuously variable rear hub as well. That’d really stymie the “How many” question. 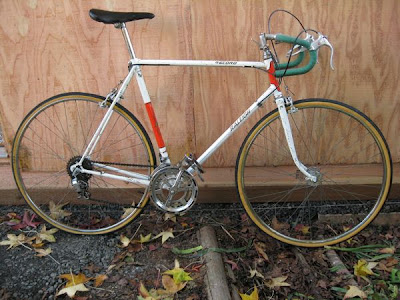 I remember the first bike I saw with actual derailleurs – a “10-speed” or as we called it “English Racer.” The diamond frame with straight tubes, skinny tires, no fenders, and drop handlebars was something we probably only saw in newspaper coverage of the Olympics or Tour De France. But an older teenage neighbor had one and I’d see him whiz by on it and be in awe. It was quite a change from the baloon-tire cruiser bikes we all had as hand-me-downs or the Sting-Ray style bikes that were just becoming popular. 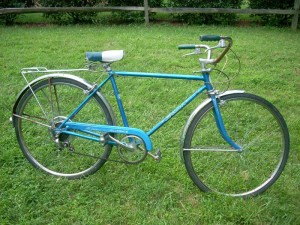 My first geared bike was only a five-speed, with a derailleur in the back. It was a Schwinn Collegiate, heavily built but reliable and I bought it myself, used from a friend who had well-used it himself. It’s a perfect example of a derailleur shift system where a mechanism moves the chain side-to-side, causing it to jump off of one sprocket to the next. Not as elegant as the internal gear hubs, where you don’t see all the works, but they offered a much wider range of gears. Once again, they were operated by a cable going to a lever somewhere the rider could reach with some level of convenience. The Schwinn was all about convenience and the shifter was a long, solid lever at the center of the handlebars right near the stem. Fancy touring bikes had little levers at the end of the drop bars, Bar-cons, they were called, while racing bikes had them on the down tubes where you could only reach them while you were resting on the drop handlebars. The Collegiate had conventional bars and the big lever was ideal for the upright riding position.

To shift a derailleur, you had to turn the pedals. You couldn’t get away with it while stopped or else you’d end up with some great grinding and clunking noises when you did try to pedal it. If done properly, while pedaling, you got little more than a satisfying click and a change in the feel of the pedaling effort. Ideally, you let off the pedal pressure a little as you shifted. It was very satisfying, like working the clutch while driving a sports car. Not that we knew what that was like then.

The Collegiate was the little brother to the Schwinn Varsity, a legend over the years and although Schwinn is a pale shadow of the company it once was, they still sell bikes with that name today. Pretty much at the same price too, around $200. That was a lot of money back then, but in today’s dollars, I wouldn’t want to trust my body on a $200 dollar imitation of a bike, no matter what name is on it.

The particular year of the Collegiate I had used one odd thing. The front sprocket had a ratcheting mechanism that let it freewheel like the back gear on most bikes. The idea was that you were supposed to be able to shift gears while coasting, because the rear gear cluster was fixed on the wheel and turned the gears and chain while you coasted. I never knew if it worked, because the fellow who I bought the bike from had replaced the rear sprockets – probably the whole wheel – with a conventional freewheeling one. The result was it didn’t shift when coasting. It must have not worked very well, because Schwinn abandoned the idea on later versions of the bike.

So, anyway, it’s easy to see that the old Collegiate had five speeds. The Varsity was called a ten-speed. It had the same five-gear derailleur in the back, and a front derailleur that shifted the chain between two front chain rings. 2 X 5 = 10. Simple. Or not. The reality was that it only gave you 2 or three additional gear ratios. If you were in the middle of your gears on the back (gear “3”) and shifted to the larger front chain ring, it was almost exactly the same gear ratio as if you shifted the back to gear “5.” There was a lot of overlapping range so you actually only gained additional gears at the extreme ends of the gear ranges. I’m not going to go into gear-inches, or number of teeth, but for practical purposes, much of the middle of their ranges were overlapping. And that isn’t a bad thing. It was good to be able to not need to shift both derailleurs all the time. You’d use one or the other front, depending on the terrain you were in, and work the back most of the time. 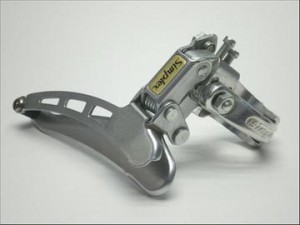 Now it didn’t stop there. More exotic bikes came along with more sprockets. Three in front became popular with touring bikes and is pretty standard today for mountain bikes. The smaller front sprocket, nicknamed a “Granny Gear” helped even the wimpiest riders get up steep hills.

Manufacturers, driven by demand from racers, kept adding more in back as well. Thinner sprockets and chains have allowed them to steadily increase the number of gears they can stack on the rear sprocket cluster. 11 is common today.

So doesn’t that make a 33-speed bike a reality? Well, only if you want to look at it that way. I prefer not to. As before, there is a large overlap between ranges and the selection of the sizes of the front chain rings determines how much that overlap is. There is always a significant overlap.

The best way to look at it is to think of a transmission in a truck. Actually, trucks do a lot of shifting much like a bike and for pretty much the same reasons. They have a load that must be moved by an engine that is much smaller than the inertia of the load and they have to do it over a variety of terrain.

Think of a triple chain ring on front of a bike. You should ride most of the time in the middle ring. It offers gear ratios that combined with your rear gears offer easy starts from a stopped position, comfortable riding at cruising speeds and low enough gears for moderate hills.

The larger front chain ring is like the overdrive in the truck. You switch to it when you are on smooth, level roads, or long downhill runs and need extra speed. It’s not good for a start from a standstill, but boy, does it fly on the open road.

The smaller front chain ring is your low-low gear. You go to it when the going gets tough, going uphill. It gives you a good selection of gears that let you find a good efficient ratio for climbing that hill without groaning as you mash the pedals. Just as Archimedes said “Give me a lever long enough and a fulcrum on which to place it, and I shall move the world,” given a low enough gear, you can climb any hill.

So don’t ask how many speeds a bike has. Think of them as a transmission with an overdrive and a low gear, and you’ll have a better grasp of their capabilities.

One comment on “How many speeds does that have?”