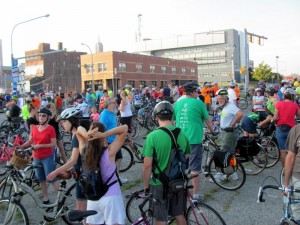 I recently went on a group ride called “Slow Roll” in Buffalo. It’s a weekly ride that begins at a different point each week and goes through varying parts of the city. The Buffalo ride goes on Monday evenings.

I heard about the rides earlier this summer, but it didn’t hold a lot of appeal to me. I was surprised to read later that one of the rides had attracted over 1300 riders. Hard to keep something that big quiet.

This is what their website says they are about:

Founded in Detroit, Slow Roll is a group bicycle ride that meets every Monday night and has expanded into a Global network of community rides. Each week we meet at different venues and take a unique route throughout the city, including all the major and minor neighborhoods that we are so proud of. Slow Roll is for everyone; all ages, all skill levels and every type of bike is welcome. Bicycle through Buffalo with 500 of your new best friends! Our slow pace keeps the group safe and gives riders a unique perspective of our great city and its neighborhoods. Minors under 18 must be accompanied by a parent/guardian.

I had met someone online that was selling a bicycle accessory that I wanted, so we agreed to meet at the ride. I figured at the very least, I’d get a nice evening ride out of it. So, we did just that.

There was a large crowd at the starting point, Handlebars on Swan St. I heard later it was estimated at 800 riders, not bad for Labor Day. I rode along with my new friends and followed the crowd at a very leisurely pace, sometimes even coming to a full stop. It was a bicycle traffic jam at times.

The whole ride is controlled by volunteers called SQUAD who were easily identified by their orange shirts. They rode along as escorts and would hold up traffic at intersections, keep the group together and avoid gaps in the mass of riders that might allow a car to sneak in and cause havoc.

There were rules, keep to the right of the double-yellow line, no racing ahead, keep together – no gaps, etc., but it was all low-key and kept the group moving along in an orderly fashion. There were also police escorts at intersections near downtown and the start/finish.
One thing they told us that I didn’t try, was if you want to ride faster, wait and file in at the end. They put the slowest of riders, kids, etc., at the lead. It seems counter-intuitive that the tail end would go faster, but I’ll take their word. They were trying to keep any gaps from forming, so perhaps the back riders would be urged to catch up and close any gaps.

So, what was it like? It was a little slow for me. I actually was wishing for a bit of a self-generated breeze on the humid evening. It was kind of neat riding along with people where you can actually talk with them as you ride. The people who were out in their yards as we rode by seemed to enjoy the spectacle, especially the four of us on recumbent trikes. If you enjoy riding in those huge charity rides, you might like this, and it’s free.

So, what is the point? What purpose does this ride serve. As far as I can tell, there is no overt agenda, other than a bunch of cyclists having a good time riding. It’s lower key and not aggressive like Critical Mass and strives to keep things friendly. It’s sponsored by a small collection of community groups: The Good Neighborhood, Deep Thinka Records, Independent Health and GoBike Buffalo.

I can find nothing wrong with the Slow Roll concept, except that it tends to coddle a type of recreational rider that feels like they can’t ride on the streets with cars unless they have the street shut down and a safety escort. It does nothing to teach safe cycling or bicycle driving techniques, and a mass ride probably isn’t a good place to do that, anyway, but the reinforcement of the idea that some special conditions must be provided to get off the bike lane/bike path mindset and use the street is there. I suppose that giving those riders a chance to meet and ride with more experienced, confident riders is a potentially good way to start the dialog about street riding. I’d feel more positive about that if Buffalo had some Cycling Savvy classes or GoBike Buffalo would embrace vehicular riding instead of planning more painted paths and cycletraps.

As a sponsor, GoBike Buffalo must have some influence on the ride. It’s an organization that is a mixed bag of cycling philosophies, like many such organizations. They do some good things, but then I see a photo op in the news with them taking credit for the latest door-zone bike lane, and I just cringe. Unfortunately, I live too far away to get involved, but if I lived in Buffalo, I’d be speaking up against the badvocates every chance I got.

So, bottom line, the Slow Roll is not bad. It might not be my cup of tea, but it’s a fun event and certainly makes cycling very visible for a couple of hours every week in a friendly, neighborly way.

And I met with the friend and bought his Catrike bags which fit my trike nicely!