↓ Skip to Main Content
Home › Cycling › The next bike light

The next bike light 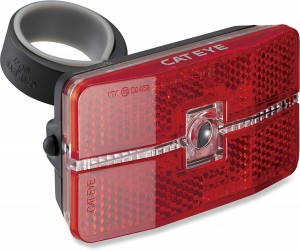 I’ve written several times about bicycle lighting on this blog. You may have read them, if not you can go back and see what I wrote.

As with most technology, it is moving forward every year, and bicycle lights are no exception. I’m currently waiting for the arrival of a new tail light for my trike.

The Cateye Reflex Auto is the newest addition to my lighting stable. It’s not the best, or the most expensive bike tail light, but it represents a significant step forward in bike lights for a few reasons.

1. It is a combination tail light and CPSC* passive reflector. That means that even if it is not on, it is a reflector just like the cheap ones that come on your bike. It will reflect light from an automobile straight back to the auto with high efficiency, making you visible using the light from the car’s own headlights. Not high-tech, but a simple addition that has usually been overlooked in LED tail lights. But since most people remove the passive reflector to use it’s mounting point for their LED tail light, it’s a glaring oversight.

* CPSC is the acronym for Consumer Product Safety Commission, the group that mandated reflectors be installed on every bike sold in the US. Their application is the minimal effort at bike visibility in dark conditions and most state’s vehicle laws are tailored to something close to this.

2. It is a very affordable LED light, being commonly available at around $25. Since it is made by Cateye, a major name in bicycle equipment (they make most of those CPSC reflectors) they have a wide distribution chain and are available from most bicycle shops. It is a fairly bright light that offers several flashing patterns that give runtimes up to 120 hours on a pair of standard AAA batteries. The combination of availability, cost and visibility make it a good choice for many people as a main tail light.

3. Cateye has made a leap into the future of bike lighting by making this light smart. It detects both light and motion, so it turns itself on whenever the bike is moving and it is dark. This doesn’t seem like much of a big deal, but it’s a big step forward in the safety of little Johnny if his parents put on his bike. Not only can’t he forget to turn it on, he doesn’t need to remember to turn it off, so those 120 hours of battery life will be used when they count, when Johnny is riding after dark.

Now, the LucidBrake light that I reviewed before sort of did this as well, at least turning on and off automatically, but at a much greater cost. I think it’s a better all round tail light, and the brake light function is unique, but it is still not widely available.

So, since it is so affordable, I ordered the Reflex Auto and am waiting for it to come in. My plan is to use it to replace the old Cateye TL-D1100 “Pineapple” light that is mounted under my rack just above the rear wheel. It’s the standard place where the original CPSC reflector was mounted.

The TL-D1100 is a great light, unique in that it’s really two LED lights in one case. You can turn each set of lights on, off, or to different patterns independently. I don’t know what the purpose of that is* but it makes endless combinations of light patterns. And it is really bright for a traditional LED light.

* I have heard the opinion expressed that a blinking light a.) makes it harder on a dark road to gauge distance of the bike rider and b.) that drunk drivers drive towards blinking lights. Perhaps the idea is to be able to run half the light steady on and the other half in a blinking pattern, thus getting the best of both.

So the Reflex Auto will go on the rack where it will function only after dark while in motion. It will complement the DiNotte that I have mounted high and to the left, near back of my seat by my shoulder. I run this light whenever I am on any roadway, day or night.

Incidentally, while I still swear by the DiNotte and will continue to use it as long as I can, there are now several 2 watt LED rear lights that ought to rival it for brightness at very good prices, under $50.

The Cateye Reflex Auto is also available in a white version for mounting at the front of the bike. Not really a headlight, but it should beat a passive reflector easily for front visibility.

I’m a believer in redundancy in bike lighting. There is something I like about riding after dark when it’s cooler, but only a fool would do it unprepared. With batteries being batteries, and going dead at the most inopportune times, I like to have a backup. I have two headlights, a Coleman LED flashlight in a bike holder and a 900 lumen li-ion powered light from China. The li-ion pack lasts a really long time, so I’m apt to use it for several rides without charging. That means I’m likely to run out of juice someday, even though it’s indicator light is supposed to warn you. I’ve had the TL-D1100 as a backup ever since I got the DiNotte. Sometimes I use both together. The Reflex Auto will make sure I’m always using both after dark.

4 comments on “The next bike light”