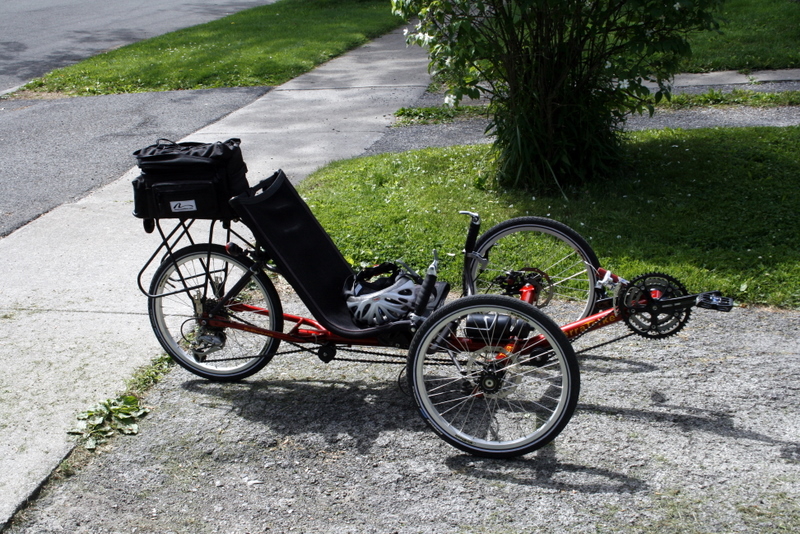 One of the things about a new bike is it’s not really yours, until you customize it. That’s a process that might never end, but a lot of it gets done while it’s pretty new. Later, the urge to change or add things tapers off.

I suppose it’s the same with a new car, but it’s much easier to do, and less expensive, with a bike.

I started at the shop when I asked for the rack. There was another TerraTrike that had a really nice rear rack on it, so I asked for one like it. It was the only one they had, so they simply took it off the other bike and put it on mine. It’s very sturdy and just the right size for it. Since I’d like to be able to carry things with me, it was a necessity.

After I got home, I continued my customization. I got a couple LED blinky lights and put one on each side of the back of the seat. I liked them, and they look pretty bright in the dark, but after riding with some other people, I found out they now make much brighter warning lights, bright enough to be useful in the daytime. I’ll have to look into them. 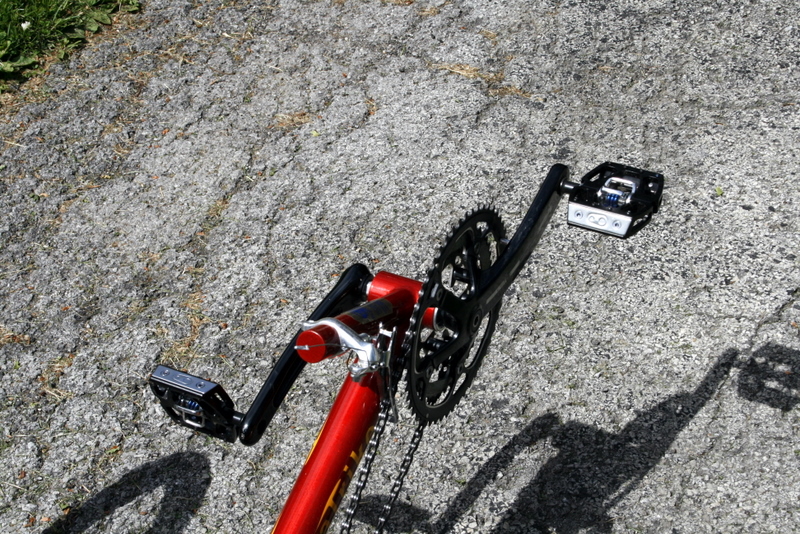 I’ve ordered a lot of bike “stuff” online from places like Performance Bike Shop and Bike Nashbar in the past and I perused their catalogs online again. I needed some things that you shouldn’t be riding without. Things that are really consumables, not accessories, like spare tubes and tires. I found out those online shops don’t really cater to recumbents and didn’t have those things. I did find things, though. Yesterday, the mailman delivered a package from Bike Nashbar with a rack bag and some new pedals. Both were on sale so it cost less than it might have otherwise. You can see the bag in the photo. It’s big enough to carry a lot. I rode around today with my digital SLR safely inside it and a pair of shoes too. A spare tube, patch kit, pump, lock and cable are in it too and there’s tons of room left. It’s pretty handy.

The pedals are a set of Crank Brothers Mallet pedals. I picked them up because they looked like they might work well with or without cleats. I put the cleats on my road shoes and they work. They’re not as easy to get into as the Look-style pedals, but on a trike, once I’m in, I don’t need to get out often. They work fairly well with plain sneakers, without being able to lock in. Good enough for short rides. Eventually, I want to get a set of mountain/touring shoes with a hiking sole that takes the cleat. Then the pedals will be perfect and I won’t slide around when I get off the bike and walk.

I’ve also got a mirror coming from Performance. I hope it will work. Most mirrors are designed for conventional handlebars and are either just in the wrong place on these bars, or won’t work at all because the bar end shifters are where they want to be. One of the bikes I test rode had a nice mirror on it and I really like having one. It was a type of mirror I had used on one of my road bikes before, even though it’s sold as a mountain bike mirror nowadays. I ordered one that simply fastens on with a strap. I’ll be able to try it in various places until I find where I like it. 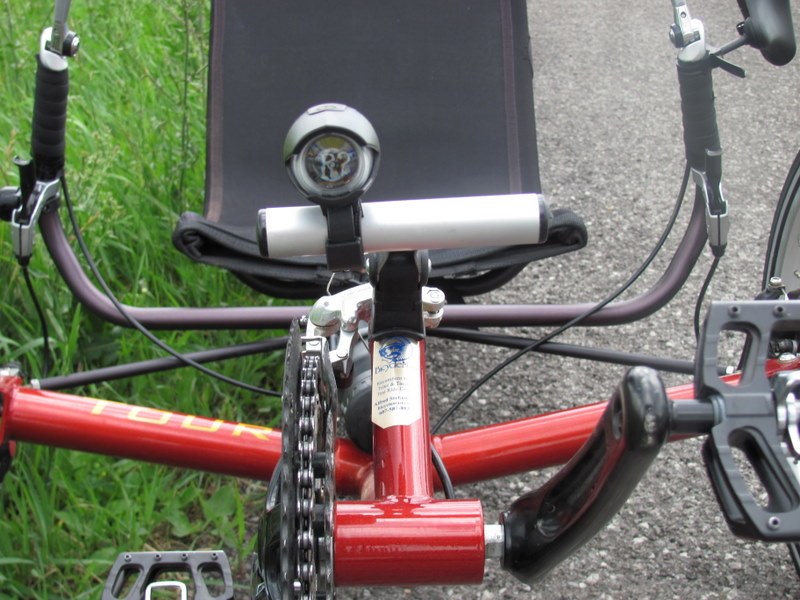 While I was searching for stuff online, I found an item I was looking for and noticed the name of the business was Niagara Cycles. I wondered if that meant they were nearby, and sure enough they are in the Town of Niagara right on Military Rd. I decided to stop in and check them out. I found a very nice shop in a building that was once a drug store. They seem to do a huge online business, but have a very nice showroom and retail space complete with a repair shop. I stopped by after a morning ride with the bike club and was out and about anyway. I found a lot of things I wanted and ended up picking up some spare tubes, patch kit, some bottle cages and various hardware to mount them and a cycle computer. The thing I was searching for when I found them online, was out of stock, but they ordered it and they called today to say it was in. It’s a bracket that will let me mount the cycle computer (and a light) up front between my feet near the pedals. It’s hard to describe, but I’ll put a photo here when I get it. 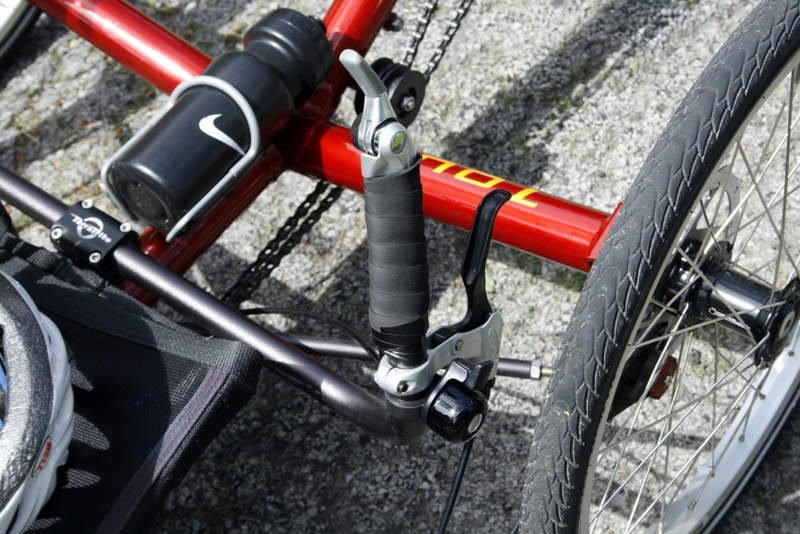 And I picked up a little bell. They are nice to have if you ever ride on a recreational path. When you come up behind someone walking, sometimes you sneak up on them so fast that you startle them. It really would ruin everyone’s day if some walker jumped right in front of a bike, so a little “ting-ting” to let them know they are not alone with nature does the trick! It’s just a little thing and you can see it in the photo, next to the brake lever. It’s black and matches the handlebars.

Yesterday, I rode 23 miles with the bike club I belong to, the Niagara Frontier Bicycle Club. The ride started in Pendleton, almost at the county line and rode to Lockport and back. We stopped for breakfast at the Sugar Shack on West Ave. before riding back to the start. I was way behind the group, I’m so out of shape, but a couple of the guys came back and rode with me. I considered just riding home and having Bobbi, drive me out to pick up my truck, but after we ate and rested, I felt better and kept riding. I was still behind the group, but not as badly and really enjoyed the ride. I’m finding that the trike is a different riding style than a regular bicycle and as long as I keep to my own pace and enjoy the ride, it’s great. Pushing to keep up with an arbitrary pace set by someone else is hard. I’m confident that after some more riding and when I get in condition, I’ll be able to keep up at will.

Today, I rode on my own. Maybe 10-15 miles. If I had the cycle computer installed, I’d know exactly! But I had a good ride and got a workout. It was a little cool, but sunny and very enjoyable, especially out of the city where I had the road to myself.