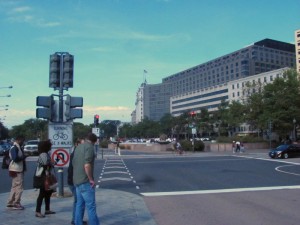 I recently spent a week on vacation in Washington DC. I am fortunate to have an Aunt who lives there and my wife and I were her guests for the week. We did all the usual touristy things, museums, the Zoo, monuments and restaurants. But I had one day where my wife wanted to go shopping and that gave me an opportunity to do something else that she didn’t want to do.

She was shopping at Union Station and there happens to be a bicycle tour and rental place there called Bike and Roll. I used the opportunity to rent a bike and ride around the Mall area of DC.

I’ve heard all sorts of things about the bike lanes and traffic in Washington, so I was curious to see first hand what bicycling there was like. The city has a reputation for bad traffic as well. After driving in NYC many times in the past year, I can honestly say, DC is a piece of cake compared to NYC.

But I haven’t ridden a bike in New York City, so I can’t compare there. All I can do is give my impression of bike riding in the Mall area.

This was the first time I have ridden a “normal” bike in several years. I’ve been riding both two and three-wheeled recumbents recently, but not because I have to, I just enjoy the comfort and laid-back style. But there is no physical reason I can’t ride an “upwrong.”

The rental was a well-worn Trek hybrid bike, the sort with sturdy tires, straight handlebars, a rear rack and cushy seat. The seat had a quick release to adjust the height and it was the only comfort adjustment you could make. And make it over and over, because it wouldn’t stay put. The shifters were twist-style and while they made a clicking noise when you moved them, there wasn’t really any relation to a click and a gear change, so I can’t really confirm that they were indexed. More like ratcheting! But they did shift. Not smoothly, but passable enough. The front only went between the granny and the middle ring, but I never really needed the big ring. The bike had a suspension fork which bottomed out easily and every time I started up from a stop, it hit rock bottom. But for a couple of hours, I could get along on it.

I was too late for the morning tour and the afternoon one didn’t start until 2:30, so I just did a rental and went out on my own. I was given a helmet, a lock, and a map, and pointed towards the Capitol.

I headed out, riding in the lane confidently. I had no problems. At some point, I turned off the street and onto the sidewalk to stop at a bell tower we had seen the day before from a bus tour. Still no troubles. I headed out and made a slight turn onto another street. After several blocks, taking the right lane, I realized I was on Pennsylvania Ave. when I noticed the infamous two-way cycletrack in the center of the street. I made a couple of careful lane changes and gave it a try.

It felt a little weird, riding down the median of a big street, but it worked okay. There weren’t a lot of other cyclists using it, but there were some. I found I had to stop at lights often and some of the other cyclists did as well, but some didn’t.

The one thing that confused me at first was how to get off this merry-go-round. It was fine for going straight, but how do I make a turn without getting killed? The signs at each intersection seemed to indicate that the crosswalks were to be used. I’m not keen on riding in crosswalks, nor did I want to get off and walk the bike, but eventually, I just rode next to the crosswalk when it was clear for pedestrians to go. Right turns were easiest, just wait at the red light for the crosswise pedestrian signal and cross next to them. Left turns meant crossing on the green light, then waiting for the light to change to go with the green to the left. Oddly, most of the cross streets had no bike lanes, so I just went into the lane control mode again.

I rode all around the DC Mall area. There were streets with door-zone bike lanes, the bi-directional median lanes on Pennsylvania, and a couple of bi-directional buffered lanes at the side of a street, but for the most part, there weren’t any bike lanes and it didn’t seem to make any difference at all.

I rode on a couple of streets with heavy traffic and had no problem by taking the lane. One street was really clogged up and I cautiously filtered forward on the right. When traffic began to move, I just signaled and moved back into the lane. Another one-way clogged street was full of buses near some of the museums. The curb lane was full with parked buses and the next lane was full of buses dropping off people. The left lane was also parked cars, so nothing was going anywhere fast. Except bikes. I was able to cautiously pass the double-parked buses without any difficulty.

For someone who is proficient with a bike and not afraid to ride under varying conditions, a bicycle is a great way to see a city, or at least that city. I saw more than we did from the tour bus we rode in less time and was able to stop and look around at will. The ability to go from street to sidewalk with no effort was amazing. They allow bicycles to ride the walkways up to monuments and along the Mall area, although I often dismounted and walked the bike whenever there was a lot of people. The ability to go on streets closed to cars was nice as well, just ride between the bollards. Like many places, bicyclists are regarded as pedestrians on wheels and no one gives it a second thought. I was able to go right to the White House that way.

I watched other cyclists during the whole week and in other parts of the city out of curiosity. What I saw was not a cycling community that followed any set of rules, but what we see in most other cities, bike riders of every style, type and ability. I was pleased to see many cyclists as I walked along Connecticut Ave. that rode in the lane even during rush hour and stopped at red lights. It can be done, even during (or especially during) heavy traffic.

But almost as frequently, I was passed on the sidewalk by people on bikes. I can’t call them cyclists. How one minute I can see a cyclist riding effectively in the busy road, coexisting with other traffic, and the next see an equally fit person that is scared to ride in the street ride down the sidewalk. It just goes to show that what is needed isn’t bike infrastructure, it’s training and education of cyclists.

To be fair, I also saw the in-between case, the rider in the gutter, ducking in and out around parked cars, waiting for a break between platoons of autos to go around them. Still a case for education such as Cycling Savvy offers.

One comparison between NYC bike riders and those in DC that I’ll make is DC has mostly regular people riding. In NYC, there are two types, delivery riders and lycra-clad racer wannabees. NYC has normally-clothed people too, but not a majority like DC seemed to. The vending machine rental city bikes were popular in both cities.

Someday, I’ll get back to DC and ride again. It would be a blast to ride there on one of my recumbents.