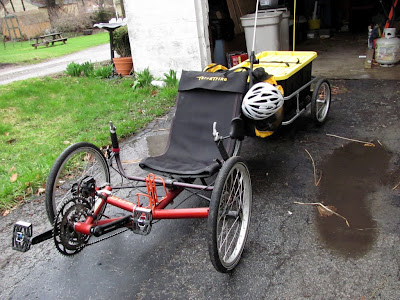 As I get closer to beginning my cycling escapades, I’m thinking about it all even though I’m not yet riding. So far this spring, the weather hasn’t been what I find riding weather yet. I’ve taken one short ride so far, just a couple miles, with the trailer on just to see how it handles.

So, I suppose some people may wonder why I’m riding around on a three-wheeled lawn chair instead of a “real” bicycle.

Believe me, it’s a choice, not some kind of accomodation. I can ride a two-wheel DF (Diamond Frame) bike perfectly well. I just don’t enjoy it as much. I have no balance problem. No problem keeping up a decent speed. No aversion to either road or mountain bikes. I own each of those types as well.

The recumbent trike is neither faster or slower than a regular bike. You might think it has to be one or the other, but it’s not something that can be answered in simple black and white. Sure, a light racing bike will blow by me with ease. They’ve got one third less rolling resistance, even if everything else was equal. The two wheel bike has less frontal area which translates into less wind resistance. Some light-weight, two-wheeled recumbents can kick most DF bikes butts. That’s why they’re illegal in USCF racing.

My laid-back recumbent position has some advantages too. A lightweight two-wheeler accelerates like a rocket compared to my trike, but the trike, once up to speed, likes to stay at speed. It climbs hills without any problems from wobbling side-to-side and it rolls down them scary-fast. You can’t climb out of the saddle and stand on the pedals, but there is no need to. And the laid-back position keeps your stomach area from being compressed and lets your diaphragm work normally, something anyone with a couple extra pounds on a DF bike is painfully aware of when crouching over the handlebars trying to stay aerodynamic. You also have no weight on your hands, so there’s no pinched nerves or aches in your palms, arms, neck or shoulders.

So there isn’t really any direct comparison. The Trike is like any heavy-duty touring bike, and what I plan on doing isn’t a race. No timetable. No deadlines. No agenda. No hurry.

What I do want to do is travel and play tourist and be able to carry a reasonable set of amenities with me. I tried an overnight trip last summer and it can be done with the bike alone. With the new trailer, it will be a cinch.

The big plus with riding in a recumbent position is the view. I never realized how much time on a DF bike is spent looking at the pavement until I tried something different. I really enjoy riding sitting back comfortably and looking around me. It makes all the difference in making traveling alone enjoyable.

I’m starting to really look forward to taking some shorter trips to build up to longer ones. My schedule has been pushed back some. My last robotics event is at the end of April with us returning home on May 1. After that (immediately after) I have to drive my second son to NYC for a hospital visit for his transplant evaluation. I promised him I’d see him through it, just as I did for my oldest son and I really want to do it for him. But it means another week plus that everything gets pushed back.

My first thought was a trip from home south through Pittsburgh on the ACA Underground Railroad Route then meet up with the GAP Trail that goes along the PA/WV/MD border area and connects into the C&O Canal Trail that goes into Washington DC. I’m thinking that might be too ambitious for a first trip. I probably won’t think that after a couple weekends out, though.

Some other things I could enjoy doing would be going to some events I usually drive to. It all depends on the timeframe. I’ve given some thought to riding to the Great Blue Heron Music Festival or others like it. I’d be camping at them anyway. Another might be to ride to the Dayton Hamvention. That’s a long one and probably too soon to pull off, but it includes a meeting and ride with members of the Bicycle Mobile Hams of America. I know there is a campground not too far from the Hara Arena too. If I can stand a KOA, that is.

Finally, if I wanted to go in another direction, I might enjoy riding up to Maine for the Lobstercon meetup every July with a bunch of Ham Radio QRPers that camp on the ocean there.

I have no shortage of ideas, it’s just going to be a matter of when and where I get around to taking off.

The trailer is assembled. It’s actually a cinch to put together or fold up into a small package. It will actually fit into it’s own waterproof sack that you use in it to keep things dry. I’ve added a heavy-duty plastic bin from Home Depot that is the perfect size for it. It sits right inside the trailer and you could even tie more stuff down on top of it. It makes quite the package.

I’ve been working on the electrical system for it too. I’ve spent a few hours recently cutting plywood to fit inside of it to mount all the electrical components. It holds the battery and solar charge controller in place so they won’t slide around. A second level over that will hold the AC charger and the chargers for all the accessories it will power. I need to be able to power or charge a cell phone, netbook and AA battery charger. I think the easiest and most universal way to do that is to install a cigarette-lighter style accessory jack. That will work for those things with a car-adapter. I also have a small DC-AC inverter that would work for the AC chargers if I can’t manage a direct 12v connection.

All the Ham Radio stuff, of course, will run directly off the battery. I’ll be using many Anderson PowerPoles for interconnections there. I’ll probably have one power run up from the trailer to the bike for the VHF radio there. I haven’t worked out the antenna yet, but am not too concerned about that. I’ll probably build a J-pole onto the fiberglass flag that’s already there.

I may, room permitting, add a smaller battery in the trunk bag on the bike’s rack. I have 7AH gel cell that would be perfect. That would give me radio and lighting power for times when the trailer is detached and still charge from the solar panel when the trailer is on.

Another piece of plywood has been cut to mount the solar panel on. I drilled it and put in T-nuts to fasten it together, but took it all apart again so I could seal it. I painted all the plywood pieces with some leftover deck sealer I had on hand to make them waterproof.

Mounting the solar panel hasn’t been worked out yet. I envision a frame attached to the trailer to support it made out of lightweight aluminum tubing or angle. I haven’t decided how to do that yet and for starters, I’m going to lay it directly on top of the plastic bin (it’s only 8 inches longer) and bungie it down. I’ll see how that works out.

Solar capacity is limited by size. I have probably twice the ideal battery capacity the panel needs. I figure if the battery was fully discharged down to the level just short of damaging it, it would take two days of bright sun to recharge it. Some tests I did on my deck with it support that. But I don’t think I’ll discharge it that much. Most days will put a very light load on it and there will be times when I’ll be able to plug in somewhere and charge it off AC power too. I’ll see how well it works later.

So that’s it for the cycling status right now. I’ll get some photos of the whole thing as it stands and put them in this post.

Some photos of the construction of the trailer, so far, can be seen here.