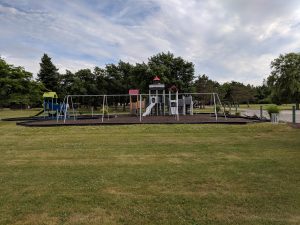 Playground at Golden Hill SP. I can’t believe I didn’t get a photo of our campsite.

I’m long overdue for posting here. So much so, that it may take several posts to cover everything.

My hopes this summer was to get out and do a lot of camping with the A-Frame trailer, but it didn’t quite go as planned.

I got the trailer out of storage, but in the process, I somehow hurt my back. I can’t put my finger on any one thing that did it. There was no snap or pop, I just got home and was really in pain after a bit. There is nothing rigorous about the little trailer. Putting the roof up isn’t that hard and I’ve done it many times without a problem. The tongue jack is electric, so no problem there. The four leveling jacks, which I use an electric drill to run up or down are also not difficult, but involve bending over. I think the final straw was when I tried to cheat the tongue to the side a bit as I dropped it onto the ball. The flat foot on it doesn’t move easily like the old wheel did.

But anyway, I was in pain after I got it home and parked in the driveway. We did go out with it once to Golden Hill State Park for four days. I took it real easy setting it up, using a stool to sit on instead of bending over for the levelers. Going for four days was meant to give me time to recover rather than just two days or less. The mid-week site availability at campgrounds is good and we didn’t even bother with reservations.

But after I got it home, and parked in the driveway, my back began to complain again. It sat the rest of the summer in the driveway until early October when I could get it back to the storage place. Most of my camping was done in the driveway. At least it was a good place to lie down and rest my back.

So rest is what I did for most of July. When it became apparent that that wasn’t going to fix things, I sought help and went to the doctor. I was given the choice of physical therapy and a chiropractor. I went with the PT first. I went three times a week and while it helped some, it didn’t give me relief from the pain. So I went to a chiropractor. Initially, he saw me three times a week and I cut the PT down to twice, on the days in between. I got some initial relief, but it didn’t seem to last. I cut the PT down to once a week and the chiro to twice, then once a week. That has been much better and the two seem to complement each other well, but I found out I need the recovery time in between to feel any better.

At this point, I’m seeing the light at the end of the tunnel. My back pain is almost entirely gone and the nerve pain in my hips and thighs is improving so that at least part of each day is pain-free, or nearly so. I do a lot of exercises at home on the off days, but stop if it hurts too much. I’ve got a couple of favorite exercises that really produce results and I try to do them daily and work in some of the others periodically.

Also, as I turned 65 and went on Medicare this year, my insurance has all changed. Mostly not a big difference, but a few times where the claims got mixed up and needed to be straightened out. One good thing I gained is the Silver Sneakers benefit. I hope to take advantage of it when the weather turns colder. I hope what I pick up from PT can be continued at a gym. I’ll find out soon.

I’d love to get so that I feel good enough to take off with the trailer and head south for warm weather sometime.