Well, I’m kind of embarassed to admit I killed my truck.

I went skiing last Thursday and on the way home, I had a mishap. I can’t explain it, just all of a sudden, the truck was spinning and hit the snowbank, not nose-first, not back-first, but full on sideways and flipped over. It caught the running board in the snow and rolled, ending up sitting on the driver side in someone’s side yard. 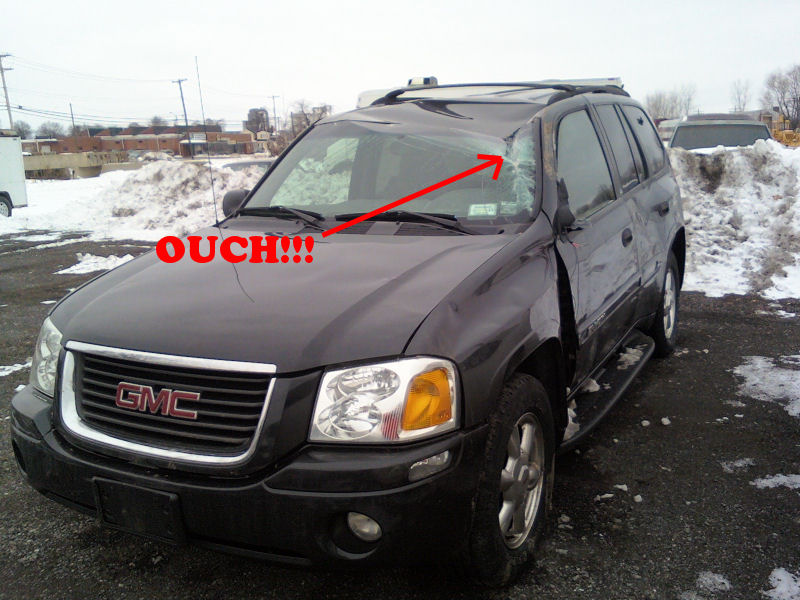 No one was hurt. No other vehicles were involved and no property – other than mine – was damaged.

I’d never been in a rollover crash before. I was leaning against the driver door window with the seatbelt still holding me in the seat wondering what to do next. I wasn’t confused, nor did I lose consciousness, but I just needed to assess the situation and figure out the best course of action to a situation I hadn’t encountered before. Once I had decided that the vehicle wasn’t about to burst into flames or explode imminently, I decided to get out. I suppose that would have been the same decision, had the truck been in flames, but I had time to decide how to do it elegantly. I turned off the ignition and was annoyed that the radio kept playing. It does that. The Envoy doesn’t turn off the radio until you actually open the door.

Opening the driver door was out of the question, the truck was sitting on it. So I decided to go up, to the passenger side. I released the seatbelt and immediately fell into a heap on the door. I got up and stood up. The door was still what seemed like far away. I decided to see if the window would roll down. I then realized that to operate the window, I had to turn the ignition back on. I could reach the button for the window and it went down a bit sluggishly. Somehow I found a foothold and managed to climb up and out and sat on the side of the truck before jumping down to the ground.

The first thing I saw was a guy with a mountain bike on the shoulder of the road talking on a cell phone. He asked if I was all right and if anyone else was in “there.” He was reporting the mishap to the police. 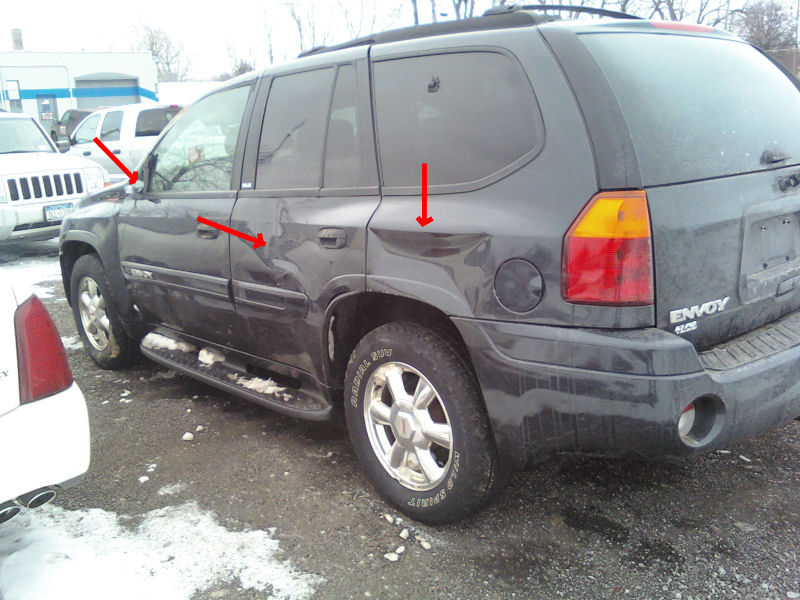 I won’t drag out the whole story any further other than explain eventually, thanks to the help of the guy on the bike, a NY State Corrections Officer, two Erie County Sheriffs Deputies, the driver of the Tow truck who was on the way home and came upon the scene and his other driver who brought the second truck needed to flip the truck back upright, I had a long ride home with the Envoy on a flatbed.

Since I climbed out the window without opening the door, the radio kept playing, as if to taunt me, until they had flipped the truck back onto it’s wheels and we could get back inside…

I didn’t realize how bad the damage was at first. I could have had it towed to someplace local, rather than spend $120 to bring it back to Lockport, if I had known it was a total loss. When the appraiser called to give me the bad news (which I already knew from the body shop anyway) we had already bought a new vehicle.

We’ve been struggling with two vehicles shared between three drivers for quite a while. Inertia and a shortage of parking space in the driveway had kept us from buying another vehicle. We got through the weekend with a rental car, which the insurance company will pay for slightly over half, so much for “rental coverage.” But we found a vehicle that Bobbi liked at the right price and took it home. She’s now the owner of a blue Jeep Liberty.

Once I get the check for the insurance and get the bank loan paid off on the Envoy, I’ll get another vehicle. We almost bought two at once, but I’m glad I waited to see roughly what the insurance will cover. I should be able to replace the Envoy with another similar model and upgrade by a few model years at the same time. 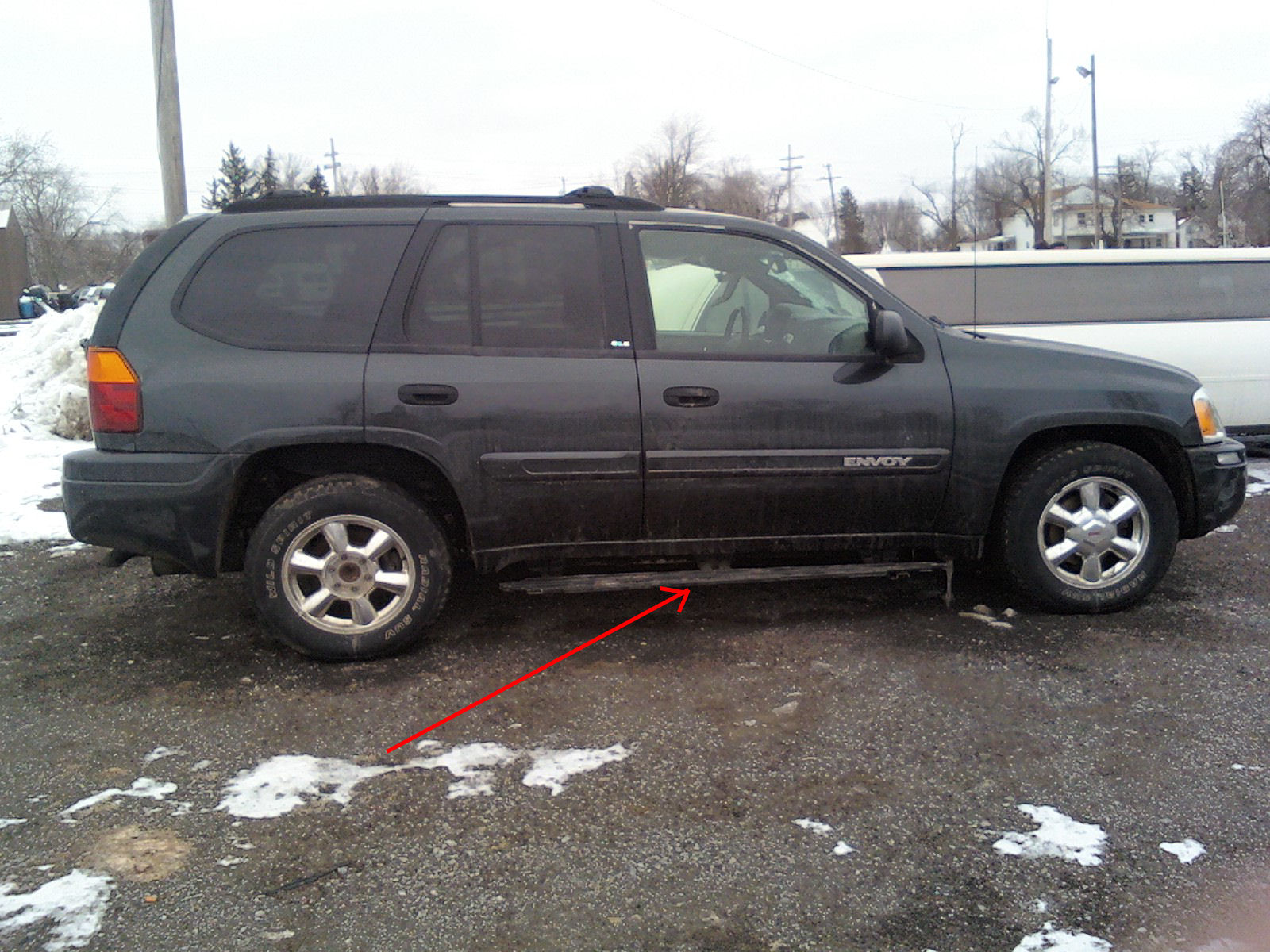 We were really sad to lose this car. It was like brand-new condition when we bought it. Sure, they clean up a used vehicle when you buy it, but this one was extra clean. The mileage was low too, and I chose it over one that was a year newer because of that. We’d kept it in good condition as well, with the biggest blemish before this having been the Bird-damage episode, which we had repaired.