Well, I picked up a new vehicle today. New to me, 2005 model. It cost me just about what the insurance is paying for the poor Envoy that was totaled. 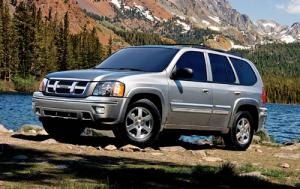 The vehicle I bought is an Isuzu Ascender, which almost nobody has even heard of. I hadn’t. Isuzu doesn’t even sell vehicles in the U.S. anymore. So why would I take a chance on a lame-duck used vehicle?

Simple. It’s just a rebranded Chevy Trailblazer/GMC Envoy. If you don’t look at the badging on the truck, you’d swear it was an Envoy. Inside, it’s almost identical to the 2003 Envoy I had and the trim details on the outside, that I think are “different,” I’m not so sure they’re not just due to the 2005 model year as much as the different name.

Some minor details – again just as likely to be model year variations, or not – no OnStar. Boo Hoo. I didn’t want it anyway and never used it in the old Envoy. It would have been expensive to update anyway, as it was the old analog cellular system. And there is a weird ignition interlock that you need to use to start the truck. You can’t just turn the key. I’m not going to give it away, because it’s kind of a neat security feature, but even the dealer had never heard of it before.

My wife bought a Jeep Liberty last week. We decided we needed another vehicle NOW, rather than keep using the rental we had picked up the day after the accident. I looked at a couple of Trailblazer/Envoy replacements, but didn’t really find quite what I was looking for. But she saw the Liberty and liked it. I have to admit, I like it too. It’s a bit smaller than the Envoy was, and I really like having a roomy vehicle these days, but it will get her to and from work in the wilds of Northern Niagara County no matter how nasty the weather gets. I like not having to worry about that too.

We only got one key and remote with the Liberty. We found out that it’s a high-security key with some kind of chip in it that needs to be programmed. you can’t just cut a new blank and go. A locksmith can do it, but they have to have both keys to make another. With one key you have to go to a dealer. So I stopped at the local Jeep dealer to get the key made. It cost $100. I bought another remote online for $30. The dealer took the vehicle information and a recall notice popped up. Guess, what, we got free lower ball joints. All I had to do was wait an hour and a half.

So, I killed time by looking at used cars. That’s how I found the Ascender.

So, we are now at three cars. Plus Albert’s, that makes four in the driveway. I don’t know if they will fit. But it will be nice to have my own vehicle and be able to go where I want when I want again.