↓ Skip to Main Content
Home › Family › Here I am again…

Here I am again…

…sitting in a hospital waiting for things to start to happen. 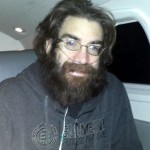 Frank as he arrives in Teeterboro, NJ

In case you don’t know me or read this blog, back in 2008 I was in a similar situation in UPMC in Pittsburgh when my eldest son, Albert, had a double lung transplant.

I’ve gotten away from blogging here recently, having been lured away by the instant gratification of Facebook. I think that it’s time to get back on here now though, because I’m here again supporting my second son, Frank, as he faces the same situation. I think serious matters require a serious platform. I’ll link to FB, of course.

So here’s the back story. Frank like Albert, has Cystic Fibrosis, a hereditary genetic disease that the major symptom is the lungs get clogged up with thick mucous and eventually, you have a hard time breathing. Treatment has improved greatly, but they just postpone the inevitable, lung failure. They just get scarred after many rounds of infections and gradually work less and less.

Frank, at 33 years old, has pretty much reached the end of the line for his lungs. Just living normally has become too hard and walking more than the shortest distance if difficult. The time between visits to the hospital for treatment has become shorter and shorter.

A transplant sounds like a great solution. A new set of lungs, not affected by CF, is just what the doctor ordered, literally. But the downside is that you trade one disease for another. After a transplant, you have a risk of infection and the drugs used to keep your body from rejecting the organs, raise havoc with your immune system. So, it’s not something to be taken lightly. You put it off unti the last minute. That’s where Frank is today.

Anyway, now that everyone reading this is up to speed, Frank got THE CALL last night, December 16th, 2014.

This post has sat too long, unfinished here, so I’m going to stop here and put it out. I’ll post in shorter, bite-sized chunks so that I’ll get them done more frequently and they’ll be more to cover one small topic at a time than the big picture.