↓ Skip to Main Content
Home › Family › We made it

We made it to our hotel. Got there almost exactly at 8AM. Found a bagel place and had a bite to eat, than went back to the hotel to see when we could check in, They had open rooms, so they let us check right in.

So we’re unwinding and going to grab a nap after driving all night. 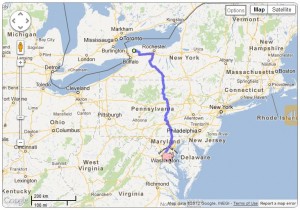 The drive was uneventful. Driving at night is great. Almost no traffic until 5AM, but boy did it pick up fast and get heavy once we got close in to Baltimore and on. By then it was time for people’s morning commute and apparently six inches is plenty of room to cut in front of someone to change lanes.

I didn’t know where I was most of the time, but just followed the navigation blindly and trusted to Google. It didn’t steer us wrong. I couldn’t have done that with my Magellan. It was so dark at night that I saw very little in the way of landmarks, so it was like flying by instruments. At times I thought I was in a tunnel.

We drove through some light fog, but otherwise the weather was great.