A Tale of Two Headsets

This post probably won’t be interesting unless you’re a Ham Radio operator, or really bored.

This is a story about two headsets – headphones with a boom microphone. Ham Radio operators use these for contesting and DXing or any time you’re using the radio while active and you don’t want to be stuck in front of a “normal” microphone. Because the microphone is mounted on the boom, it’s always near your mouth no matter how you move.

I first bought the Heil Proset many years ago for contest use. It has a special microphone that is tailored to voice frequencies and is supposed to increase intelligibility over SSB radio transmissions. It’s something that Bob Heil developed and has been one of his most successful products.

I used these all the time, preferring them to a desk microphone, but over the years, they got so they were showing their age.

One annoyance they always had, at least to me, was that the movement of the earpieces as they sat on your head made an audible sound, a click. Any movement, even the movement of your jaw as you spoke produced the plastic-on-plastic movement and the short creaking noise. They always felt slightly loose as well. But it was only in your own ears and was a minor thing that was easy to overlook.

They were also slightly fragile. I broke the joint at each earpiece where the band joins to the earcups. It’s a ball and socket joint, the same place that generated the noise. The plastic was formed to a small point with a ball on the end which fit into the earcup and allowed it to pivot there. One broke while I was at a multi-op contest effort in NNY for Sweepstakes. I’ve forgotten when the other one snapped.

I figured out a way to fix them, though. There was a hole through the center of the ball-joint. If I recall, it was for a screw to attach another piece from the inside of the earcup which held them together while still being able to pivot. I found that I could replace the screw with a longer machine screw and nut which held the broken pieces together. To tighten the nut, though I had to be able to get a socket or nutdriver onto it from the outside. To do that I had to drill a hole large enough for the socket. Thankfully, there is a stick-on piece with the Heil logo right where the hole needed to be placed. I removed the emblem, drilled the hole, reassembled the headset and put the emblem back over the hole. Voi-la! Fixed without any visible effects. 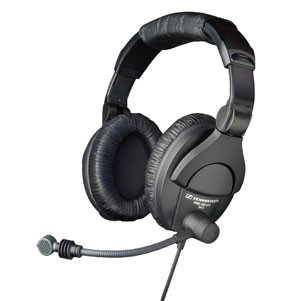 I bought a Sennheiser HMD-280 headset when I was doing my podcast. It was for field interviews so that I could use a hand microphone for the interviewee and the boom mike for myself. It kept me from having to move a mike back and forth and let me hear what was going on at the same time. They were expensive, over $300 at list price. I don’t remember what I actually paid for them, but I remember it being a tough decision. But I was still working at the time and decided to spend the money.

When I recently rebuilt my Ham Studio, I got out the old Heil Proset. Besides the repair jobs on the broken joints, the ear cushions were pretty cruddy. Age and exposure to skin oils had made the plastic coating on the faux leatherette start to come off. I wore them one time and was finding pieces of black plastic in my hair and on my ears and neck for hours afterward. The inside foam liners that cover the transducer grilles had also degraded and fallen out.

I had hooked another piece of podcast equipment up to my radio as well, the Alesis USB mixer. It’s a USB audio interface as well as a pretty standard mike mixer. I could use the USB interface to record messages for the voice keyer in contest logging software and use the mixer to feed microphone audio into the radio. I made a cable to go from an AUX out on the mixer to the rig’s mike jack. I had to do a conversion from balanced to unbalanced audio and I think I ended up with some resistor-capacitor combination in it as well. But it worked well and I put an Audix OM-5 microphone on a small boom stand and it worked very well with the Kenwood TS-850.

So, I decided why not try the Sennheiser boom mike. All the hard work was done, getting the mixer in line with the rig. All I needed to do was plug it in. I did and it worked great.

I like the feel of the Sennheiser 280 headphones. I also use a set of HD-280s which are the headphones alone. Some people would argue that the full-fidelity response would make them emphasize the highs and noise in a radio signal, but to be honest, I can’t think of one set of headphones being marketed to Hams for a frequency response suited to communications. Almost everything I’ve seen has full-range response, although maybe not as good as the Sennheisers, because they’re all based on consumer audio equipment. The Heils, incidentally, are the exception to the rule, claiming a -3db point at 8000Hz, meaning they roll off the high frequencies, with half being reduced by 8000Hz. Honestly, I don’t hear a big difference. The Heils aren’t something I’d want to listen to music on, but there isn’t a huge amount of tinniness or noise with the Sennheisers. I’m sure I could do an A/B comparison and hear it, but it’s not that big of a deal to me.

The microphone in the Sennheisers is no HC-4 either. It’s probably not a great mike anyway. It’s small and sits on the end of it’s boom with a little funky-looking swivel thing. I don’t know what it’s meant to do, isolate vibration maybe, because while it can be bent at an angle, it just springs back where it wants to be. I covered it all up with a foam windscreen anyway.

The Sennheisers have one other thing I really like about them. They are very rugged. The earpieces can fold inward letting you fold one in and have the other nest over it, making a small package that stores very well. They are beefy enough that they don’t break. I’ve kept them in side pockets on cloth bags with other equipment and never had a problem. They’re also very comfortable. Not light, but a firm, soft feel that stays put firmly on your head. The Heils are nearly as comfortable, but lack the firmness and you could probably shake them off your head with a quick movement.

The Heil Proset costs $140 plus another $20 for the adapter to fit your radio.

The Sennheiser HMD-280-13 (The last digits refer to the cable with an XLR mike connector and 1/4″ stereo phones connector) have a MSRP of $414, but can be found online for less than $250. You have to figure out how to get the audio into you rig, whether through a mixer or a W2IHY box, or a custom cbale, is up to you.

The ultimate thing might be to replace the Sennheiser microphone with the Heil HC-4. Heil used to sell the cartridges alone, but I don’t see a price on their web site. You’d also need to find the plastic pieces to hold it.

Another thing in the Proset’s favor: Heil’s rebuild service. For $45 (plus $15 shipping) you can send in your Proset and they will refurbish it. I don’t mean just fix what ails it, they totally go over it and return a unit that looks like brand-new. I sent in my old set and they came back in a week looking like new. All new plastic pieces where they had broken, new cable, earpads, linings. They even put on a foam windscreen and new cloth covers, which I had never had. The new cable has a 1/8″ end with a 1/4″ screw-on adapter too, which is a nice touch the old one didn’t have. Honestly, I have a hard time telling which parts are new and which are original, but it looks like the only original parts are the speakers and the earpieces, the boom and mike element (probably the costliest part) and the headband. Sennheiser probably has parts available for their sets, but I’ll bet they don’t offer as economical and thorough a service as that.