Cycling in the Rain 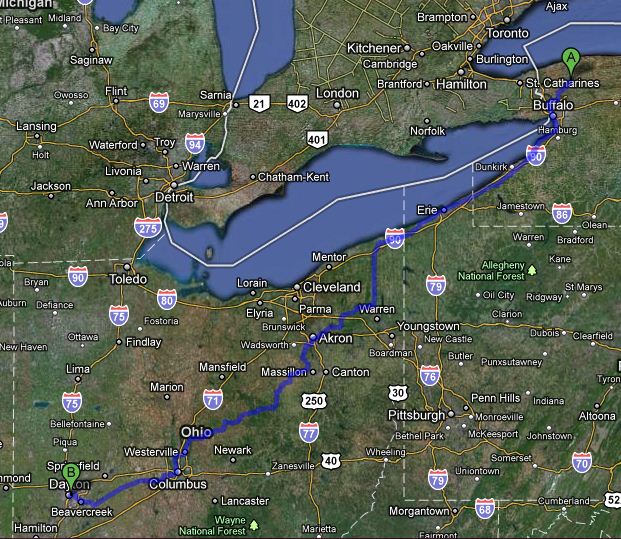 Well, I almost decided to ride my Trike to the Dayton Hamvention. I had the route all figured out and plotted to take about 60-70 miles each day. It would have taken a full week to get there. The plan would have been to leave Thursday the 12th and arrive at a hotel on Wednesday the 18th of May. I found a room less than 3 miles from the Hara Arena for a very reasonable price.

I though about a room at the QRP-ARCI Four Days In May conference, but that was a fair distance away from the Hamvention. There was a shuttle bus to and from the Hamfest, but I kind of wanted to ride there and partake of some of the BMHA (Bicycle Mobile Hams) events. Plus, the FDIM rooms were nearly twice as much per day as the one I found to the north.

So, I seriously entertained the thought of making the trip to Dayton on the trike. But I hesitated for some reason. It was pretty ambitious for a first time out. The longest ride I’ve done this spring hasn’t taken me out of the city limits. I had visions of me getting two days out and being unable to continue because I had overestimated my abilities. I talked it over with my wife and after looking at the weather report, decided to forgo it this year. I’m glad I did.

The weather this spring has been pretty unusual. We’ve had one good week of warm, sunny weather, and it was this past week. That’s probably why I was getting the itch to go somewhere. But it didn’t last. I would have gotten about as far as Erie PA and been riding in rain the rest of the way. If I kept to my schedule, I’d be somewhere near Columbus today, where it’s about like it is here, raining and in the low 50’s. Not enough to prevent riding, just enough to make it miserable.

I’ve tent camped in the rain before. I really don’t mind that. In fact, I spent my 50th birthday in the rain at Nelson Ledges Quarry Park, which would have been my Saturday stopping point, if I had gone. The only thing about a tent in the rain is, you want to have the rain stop when you take it down and pack up. Otherwise, you’re packing a wet tent complete with all the mud and dirt you have sticking to it. Not fun the next time you use it.

So, reason overrode the plans and I’m now looking to do a shorter first trip to test things out. I am thinking of riding to the Rochester Hamfest the first weekend of June. It’s just shy of 70 miles and I can get there on a Friday, stay for the Hamfest Saturday, then either come part way home and camp along the way, or just stay there and take my time Sunday. Maybe the weather will cooperate.

On the equipment side, the trailer is looking good. All the wiring is done inside and I’ve run power up the trailer tongue (I guess that’s what you’d call it. Maybe yoke is a better description of it’s shape and use.) I need to add another wiring section from a point on the rack up to the top of the rack where it can go to any electronics in the trunk bag. I plan on putting the Kenwood hand-held in there, possibly with a smaller gel-cell battery. I haven’t made an antenna for it yet. I’ve decided on how to initially mount the solar panel but also haven’t done it yet. I’m planning on adding a couple cleats of wood on the back of it to keep it centered on top of the plastic tote. Then add two slots for the tie-down strap to go through. I’ll them be able to secure it on top of the tote with the same strap. I was going to do that tonight, but I can’t find my countersinks, so I’ve been wasting time looking for them. It’s cold and rainy anyway, no fun to work in.