On the Ham Radio front 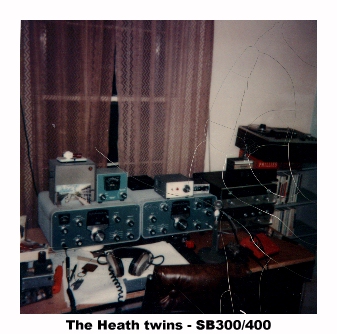 I’ve been writing here about my 40 years of experiences in Amateur Radio from time to time. Here’s one on what I’m doing NOW. It’s not exciting. It’s not cutting edge technology. But, it’s long overdue.

I don’t have any recent photos of the “Shack.” Frankly, it was such a mess, I really didn’t want to take any. It had become a place for unfinished projects to get dumped and to actually use the radios, I’d have to excavate them to get access! But the first photo is of the same room, back about 1980 or so.

I’m cleaning out and remodeling my “shack.” That’s what we “Hams” call our place where we keep our radio equipment. It’s one of many terms that were established long ago and have taken on a life of their own, despite giving a less-then-complimentary spin on our hobby.

Similiar terms are “Elmer” – a term for a Ham who helps a newcomer get started in this hobby, presumably an older person; “Rag Chewing” – a term that means just chatting over the air; and of course the term “Ham” itself, which was coined by commercial operators as a derogatory appellation, but the amateurs took it, like Yankee Doodle, and made it their own.

Frankly, I could do without all of them. Amateur, mentor, conversation all work fine for me. Since I’ve lived here, for the last 30 years, we’ve all called my room just the “Radio Room.” It’s about the only room in the house that has never been painted or otherwise remodeled. It’s been sort of the Shoemaker’s Kids story, everything else took priority.

So, I’m finally getting around to overhauling it and I think from now on, I’m going to call it not my “Shack,” not my “Radio Room,” but from now on, my “Studio.” It sort of works in the way “Office” or “Study” would, but is more technical/radio sounding.

So far, I’ve torn out eight feet of cracked plaster and put up drywall, patched and taped it in, painted the walls, and put in a drop ceiling. I don’t know why I didn’t do that sooner, because it’s the solution to one of the big problems with a “Radio Shack” – that is wires. I have a bunch of wires – coaxial cables, ethernet, phone, audio and rotor cables – coming into the room through holes in the ceiling. I kept them to two corners of the room, but they still had to get from there to the radios somehow. The old room had some 1×2 boards running around the upper wall that supported some pegboard. I laid the cables on them to run around the perimeter of the room. But it was still ugly. A drop ceiling hides all of that. They can go anywhere above it, then drop straight down to where they are needed. I can even hide them inside some kind of pillar or conduit. 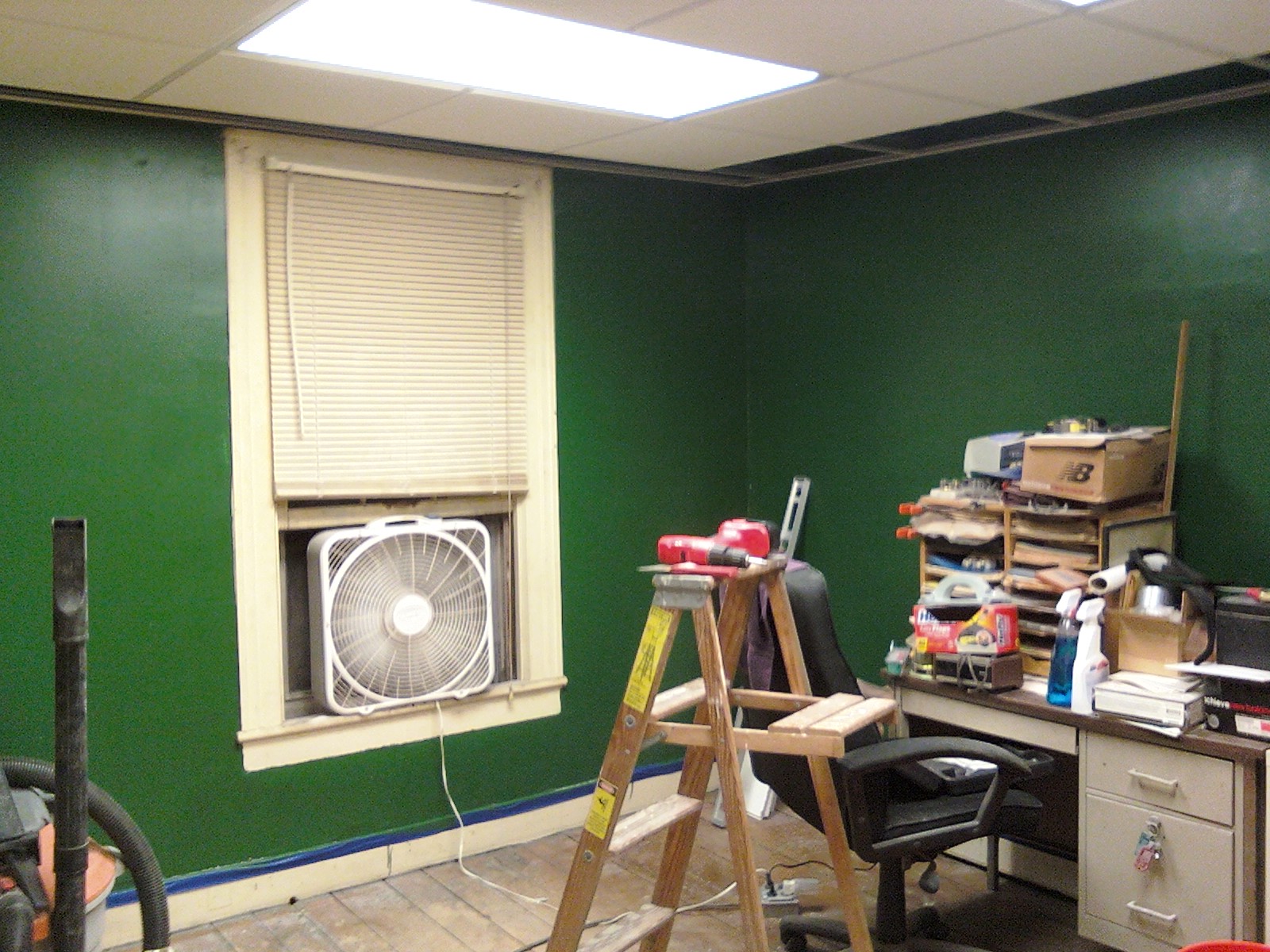 This photo shows the work in progress. I have so much stuff, I can’t move it all out of the room. I have to work around it. The desk, piled with “stuff” has to be moved around to avoid wherever I’m working.

Another benefit is lighting. The room was always dark. I use a swing arm lamp on the operating desk, but wanted more light. I put in two 2×4 troffers, flourescent lights, and wow, is it bright now.

I’m in the process of painting trim. I got one coat on the window today. Boy, do windows take forever. All the little crevices around the glass and moving the panes up and down so you can get all of them painted without painting them shut! I think the door, although bigger, will be faster. Then I need to do the mouldings around the bottom of the walls. The plan is to get the painting done before I work on the floor. That way, any spills don’t matter a bit.

The old floor was an ugly brown linoleum. It must have had a pattern once, but it was long ago worn off. I really don’t know what the room was used for before we moved in, but I understand the previous owner was a building inspector and it looks like it might have been his drafting room. We bought the house from the estate of his widow, so it had been unused for some years before I moved in. 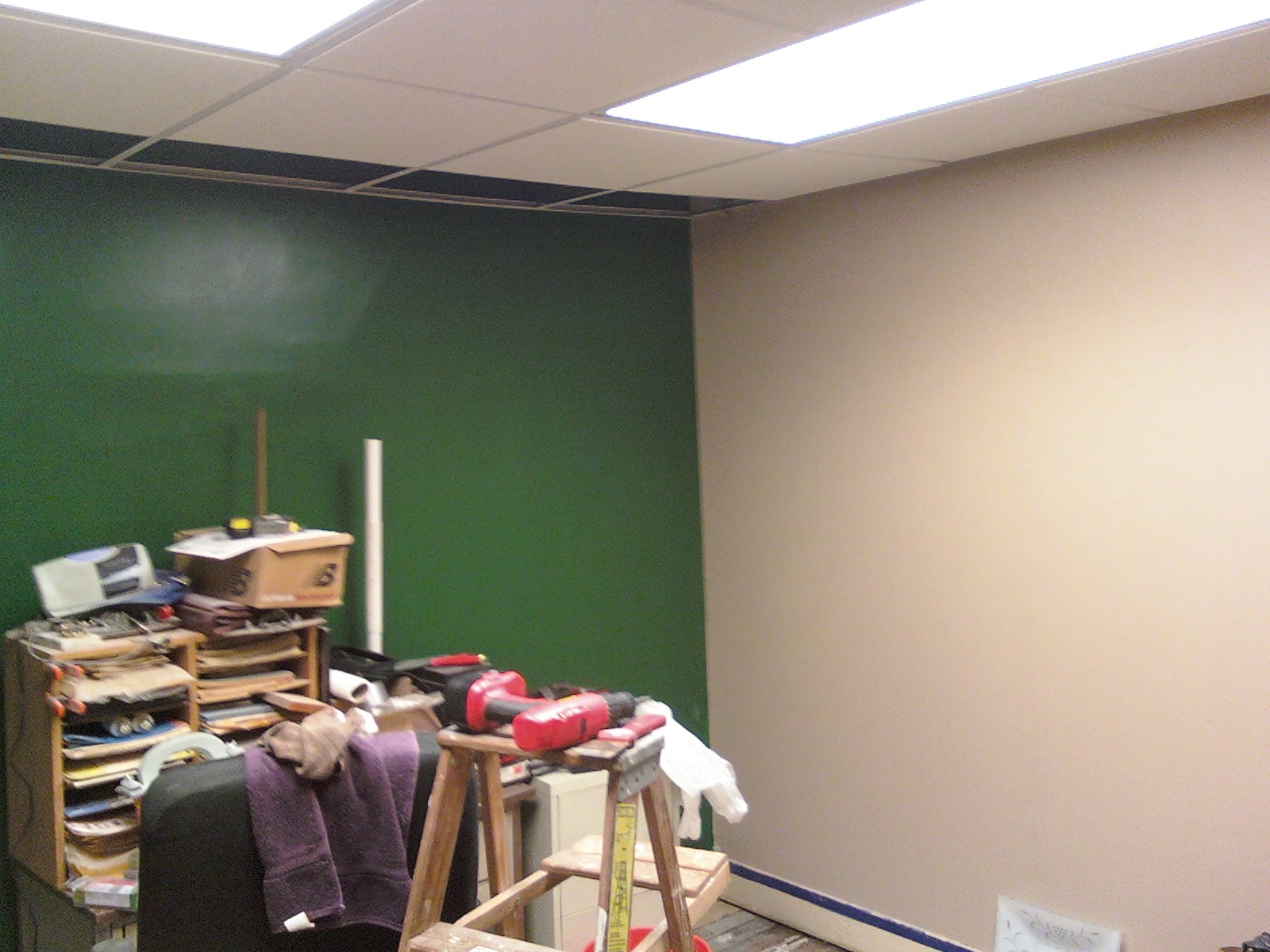 Another angle. I went with two different colors for the walls. Don’t ask why, it just seemed like the thing to do. I hope the two lighter walls reflect the natural light from the window. I may have gone too dark with the green, but I’m going to have to live with it now. The trim will be a darker tan than the color shown now.

The final step is going to be the floor. The underfloor is very rough pine boards. They are tongue and groove, but are in such bad shape, there are cracks, knotholes and patched parts all over. There was a spot where one of my chair legs had worn through the linoleum and chewed up the wood to the point there was a dip in the floor. I levelled it out with some plaster.

I’ll put down some 3/16″ tempered hardboard, what we used to call Masonite, then a floating composite floor. Most people call it a “Pergo” floor, just like they call facial tissue, “Kleenex.” What I bought is another brand, but it’s the same idea. I found a good deal on some in a light oak finish, but opted for a little more expensive version that is thicker. With the floor as bad as it is, I think all the strength I can get will help out. There’s a layer of cushion material that goes between the hardboard and the floating floor to help out too. A molding around the floor to finish it and I’ll be done.

The job of clearing out the room to just work on it cannot be minimized. It took me a couple weeks to accomplish. I now have about 10 plastic bins, some of which were in the room already, some of which are new, full of “stuff” that I will either have to move back into the room or figure out what to do with later. I have an entire large bin of just wire. Wires, cables, patch cords, all too good to throw away, or impossible to buy again if I need it. I have a good bin and a half of just computer media – old floppys, both 5.25 and 3 inch, CD-ROMS etc. I’ll probably go through them at a later date and get rid of most of them.

One of the funnier things I had was a collection of old AOL CDs. not just AOL, but AOL, MSN, AT&T Worldnet, Earthlink and just about any other ISP you can think of. Whenever I got one of their CDs in a magazine, or in the mail, I tossed it into a box. I always envisioned building a doghouse and shingling it with them, but I don’t have a dog.

A lot of the clutter is unfinished projects. Things I started to build, but lost interest, or came up against some roadblock. I saved them for later, in case I needed the parts for some other project. I’ll probably weed out a lot of them and toss them.

And magazines. It seems like I never threw away a magazine. A lot of computer magazines I never kept, but there were still a lot of them. The Ham Radio magazines, though, really piled up. I kept every copy of QST I ever received. I wasn’t as religious about 73, or Ham Radio. Maybe I should have kept any of the latter as collectors items, as they are no longer published, but almost everything is available either online or on CD-ROMs now, so why hold onto the paper? I made several trips to the recycle bin at our church. I hope they get a few cents out of it all.

The trash men must hate us. I threw away a ton of junk. One week we lined the curb with at least six computer cases, some with power supplies and motherboards still in them. I thought sure some junk collector would scoop them up for the scrap metal, but I think they still got taken by the city crews.

Then there was all the plaster debris. I tried to keep it into manageable sized bags, but it doesn’t take much to fill a garbage bag beyond it’s capacity. I had to re-bag several bags and divide them into more than one bag.

It’s pretty bad when the clean up takes as long as the remodeling job.

The final stage of the project will be the operating desk. I really wish I had a good picture of the old one, but I don’t. It was based on a six-foot piece of Formica counter-top sitting on top of a set of steel workbench legs. I had a shelf above the counter-top along the back as well. It was a good design for the radios except it was too high. Workbenches are designed for standing at, not sitting. The other problem was the depth was too deep. I had to reach a ways to operate the radio.

So, I need to design a new desk. I kept the counter-top, but got rid of the shelving and legs. The shelf was particle board and sagged. Version II will have to be 3/4″ plywood and be reinforced so that won’t happen.

I think the counter-top is good, but I’m planning to move the first level of shelf forward to bring the radios into reach better. It will overhang the counter and leave a lot of space for keys and keyboards. There will need to be a second level of shelf above the radio level for the other items. I’m still deciding where I want to put computer monitors. At least I’ve gone to all LCD screens, so they take a lot less room.