Internet Fad of the Week 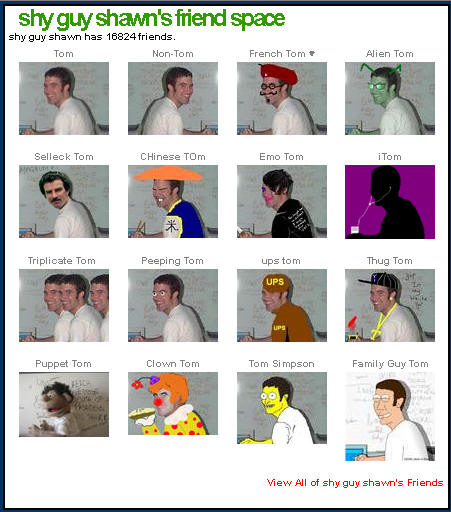 I got a friend request from a Shy Guy Shawn on MySpace today. I got a kick out of it right away because the whole site was nutty. So nutty, you had to like it.

But when I saw the friends list made of all Toms, at first I thought it was another joke. I thought he had doctored Tom’s picture and made a fake friends list. So I did what naturally would come next – I clicked on one of them.

To my surprise, it went to another MySpace page for the variant Tom. I looked in that friends list and it was even more Toms. The joke just got even better.

I don’t know if this is one person with an elaborate scheme spoofing MySpace Tom in an endless number of ways or it’s become a popular pastime, but it’s hilarious. In case you’re not a MySpace Cadet, or get violently ill at the thought of having a MySpace, Tom is the default “Friend” that everyone gets as soon as they create an account there. I guess they felt that no one should ever have no friends, so they made Tom your automatic friend.

Tom is an actual person. He does work at MySpace. He even gives you the occasional helpful message about MySpace. But it’s kind of a joke too.

Check Shy Guy Shawn’s page and the Tom-friends there. It’ll have you clicking from Tom to Tom for a while!