More Things I learned from TV 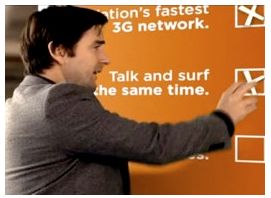 A good trusted spokesperson helps. I can’t decide who I want to buy a car from – Mike Rowe (from Dirty Jobs) selling Fords, or Howie Long (football celebrity) for Chevy. Somehow, though funny-guy Luke Wilson just doesn’t inspire me to switch to AT&T…

I’ve learned that the family that plays video games together, stays together, or so Wal-Mart seems to think. Several of their commercials feature families playing various brands of video games. Seems counter-intuitive to me… since when are video games a wholesome family activity? I guess it’s better than hanging out in the local bar, or tagging City Hall as a family.

So many of the commercials seem interchangeable. They’re almost cookie-cutter identical. Target, Wal-Mart, Kohls, Macy’s and JC Penney all blur together. How many times can you promise 20-50% off on the stuff you marked up on November 1st.

Old Navy and The Gap continue to try to outdo each other with pandering to our kids, selling “fashion” over substance. Listen to the one with the cute little cheerleader kids. They practically have a hissy fit, demanding the latest fashion and refusing to wear last-years clothes. They dress it up in cuteness, but the message is there: buy us what they tell us to wear, or else. The “SuperModelMannequins” aren’t much better. They pretty much represent what Old Navy thinks of their customers – mindless automatons, who buy whatever they tell them to. The problem is, their fashion is crap. It’s brightly-colored, cheap crap. It’s plain and if it doesn’t sell this year, wait a few years until they bring it back with a new name and call it “new.”

And don’t get me started with the Circuit City or Radio Shack ads. They’ve sunk to new lows and don’t even make sense at times.

The average number of commercials per hour seems like it’s climbing. You really notice it even when you are fast-forwarding through them on your DVR. I’ll bet it’s getting pretty close to 50% advertising on many prime-time shows. And I count self-promotion as commercial time as well. If a network spends 30 seconds plugging an upcoming show, it’s a commercial to me, whether they pay for it or not. Same goes for local “story at 11” teasers.

The thing that really ticks me off is the repetition. What makes them think we need to see the same commercial several times an hour, or even twice in the same break? The two-parters are annoying as well. Do they think that 30 seconds with a minute of other commercials, then 30 more seconds make it like a two-minute commercial?

We’ve also learned (again) that it snows in December in Western New York. The weathermen would like to make you think that’s news, but I guess there isn’t much else to talk about with the Bills sucking and all… It must have really bugged them that they had to wait until now to instill their winter snow panic attacks after they got such an early start in October a couple years ago.

There appears to be no end to the tasteless, sugary, sappy, “Christmas Specials” that TV can come up with. The Hallmark Channel seems to have devoted it’s entire schedule since November 1 to showing only Christmas programming. One Big-three network showed the much-beloved classic A Charlie Brown Christmas in a chopped-short 30 minute version because it was pre-empted by the President’s speech about Afghanistan. The conspiracy theorists are having a heyday, claiming it’s an attack on Christian values by the administration. If that’s the case, there’s a lot of crappy Christmas programming coming that they can attack. I’d thank them if they could eliminate most of it. Incidentally, the Charlie Brown show is being shown again in it’s full length later.

To me, there’s about three classic Christmas specials and there is no need for any more. Rudolph the Red-Nosed Reindeer (the one with the late Burl Ives as narrator), A Charlie Brown Christmas, and Christmas Story (the Jean Shepherd story featuring Ralphie Parker.) Not another one measures up, except maybe the original A Christmas Carol movie. (No need for the Jim Carey 3D animated movie version, or the modernized Bill Murray one either.) I’ll slide on the It’s A Wonderful Life if you insist. The Shop Around The Corner, is alleged to be a better Jimmy Stewart Christmas movie, but I’ve never seen it. I’ll still pass on the Miracle On 34th Street a “Yes, Virginia, there is a Santa Claus” rip-off that was always a clever product-placement for Macy’s anyway.

3 comments on “More Things I learned from TV”