ALMOST-TRUE NEWS: Saturday Night Live producers are trying to negotiate a return to the show of former SNLer Tina Fey to do a series of appearances parodying VP-nominee Sarah Palin. Fey, known for her role as the harried exec in a comical American Express commercial, bears a striking resemblance to Palin.

Coincidentally, News Show host Paul Harvey, reports that optometrists nationwide, have been besieged with requests for eyeglasses like Sara Palin’s. Reportedly, to get the exact designer frames with lenses that Palin wears would cost $700. Expect knockoffs soon. 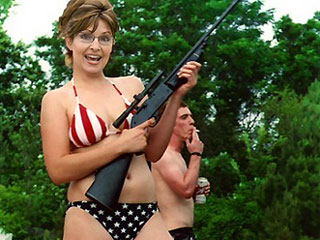 Should McCain be elected, Palin will be a great improvement in hunting safety, a life-long NRA member, Palin is said to know her way around a gun, a huge improvement over Dick Cheney.

Palin is tough on law-and-order. Not only did she fire Alaska Public Safety Commissioner Walt Monegan and try to fire State Trooper and ex-brother-in-law Mike Wooten while Governor in 2005, she fired Wassilla Police Chief Irl Stambaugh in 1996 as Mayor of that town.

[This post is intended as humorous. For real facts, please check reputable sources.]