This is another Ham Radio post, so if that bores you, tune out now. 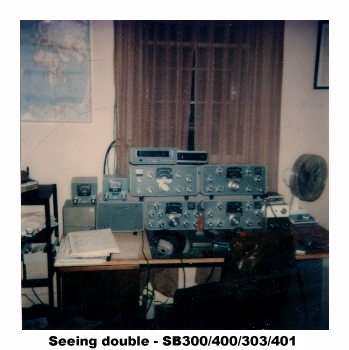 I’ve been spending a lot of time cleaning out my “Shack” as we Hams call the room we keep our radio station in. It has been long overdue for me and I’ve accumulated 20 years and more of junk here alone. When I first moved into this house, I had a lot of Ham equipment. I’ll try to find one particular photo I have of a double layer of old Heathkit gear I had. I have less now, and more modern, but you wouldn’t know it.

My room has accumulated layer after layer of “stuff” – both radio and computer – to the point where I’m afraid someone will turn me into one of those reality TV shows where they do an intervention and force you to clean out your clutter.

My main HF (Shortwave) radio had become inoperative and the symptoms it was exhibiting called for some fairly serious surgery to it. Rather than try to fix it half-a$$ed myself, I looked for an expert and found a guy in Texas, who is supposed to be the best and most affordable Kenwood repairman there is. Better than the factory, in fact. So, I shipped the radio off. Just UPS to send it was $40. But it cost $1800 in 1994 and would cost at least $2000+ to replace it with something comparable today.

Anyway, while it is gone, and a big gaping hole in the middle of the clutter where it used to sit, I decided to clean up and make it feel wanted when it returns. It’s been a four-day job, so far, and I’m far from done. But that’s just background to the story of one piece of radiogram traffic I once received.

I used to be very actively involved in relaying radiogram traffic on the radio. Think of a telegram, except sent for free and of an inconsequential, non-commercial nature, by Hams. The tradition goes all the way back to the earliest days of Ham Radio and was the driving force behind the creation of the ARRL, our biggest Ham organization. It’s one of those things Hams do to practice for when they need to do it in an emergency.

I got started in traffic handling and traffic nets just about the time I got my General license, which puts it about 1970, and continued doing it for many years. I worked a lot of CW (Morse code) traffic nets as well as Phone (voice) both on HF and VHF-FM. I got pretty good at it, to the point of being a Net Control Station on the NY State CW net and a representative to the Second Region Net. But later, as I got married and working a job, I had less time for that and had to drop out of the routine of traffic nets.

But, anyway, I am very familiar with traffic procedures and had delivered a few messages myself. I mostly relayed them across nets, but occasionally one for the local area would fall into my lap and I’d have to deliver it. The usual way was by telephone, as that was the fastest as well as the cheapest way. If you couldn’t do that, it was customary to drop it into the mail.

The irony of this was, that the sender could have done the same thing and probably gotten their message delivered just as fast. But it was a practice-in-case-of-emergency thing and most messages sent were aware of that. But we had our pride in doing a professional job, even if we weren’t professionals. The ARRL sold printed pads of Radiogram forms. I couldn’t afford them for every message I handled and usually used notepaper for messages I relayed. But if I mailed one, I had one pad of the fancy forms and would fill one in neatly, if not type, so that it looked nice. It would go into an envelope and I’d pony up the stamp myself.

Since this was mostly for practice, there were a lot of Hams that thought up clever reasons to send messages. There were booths at State and County Fairs and Boy Scout Jamborees. The whole traffic system used it’s own messages to run itself. And then there were certain Hams that had mailing lists and kept pumping out “originations” every day. There was the guy who sent a welcome message to every new licensee issued by the FCC. After a while, the ARRL Section Managers got into that. Another guy sent messages to every member of the QCWA. The Quarter Century Wireless Association is a group of veteran Hams who have been licensed for over 25 years. 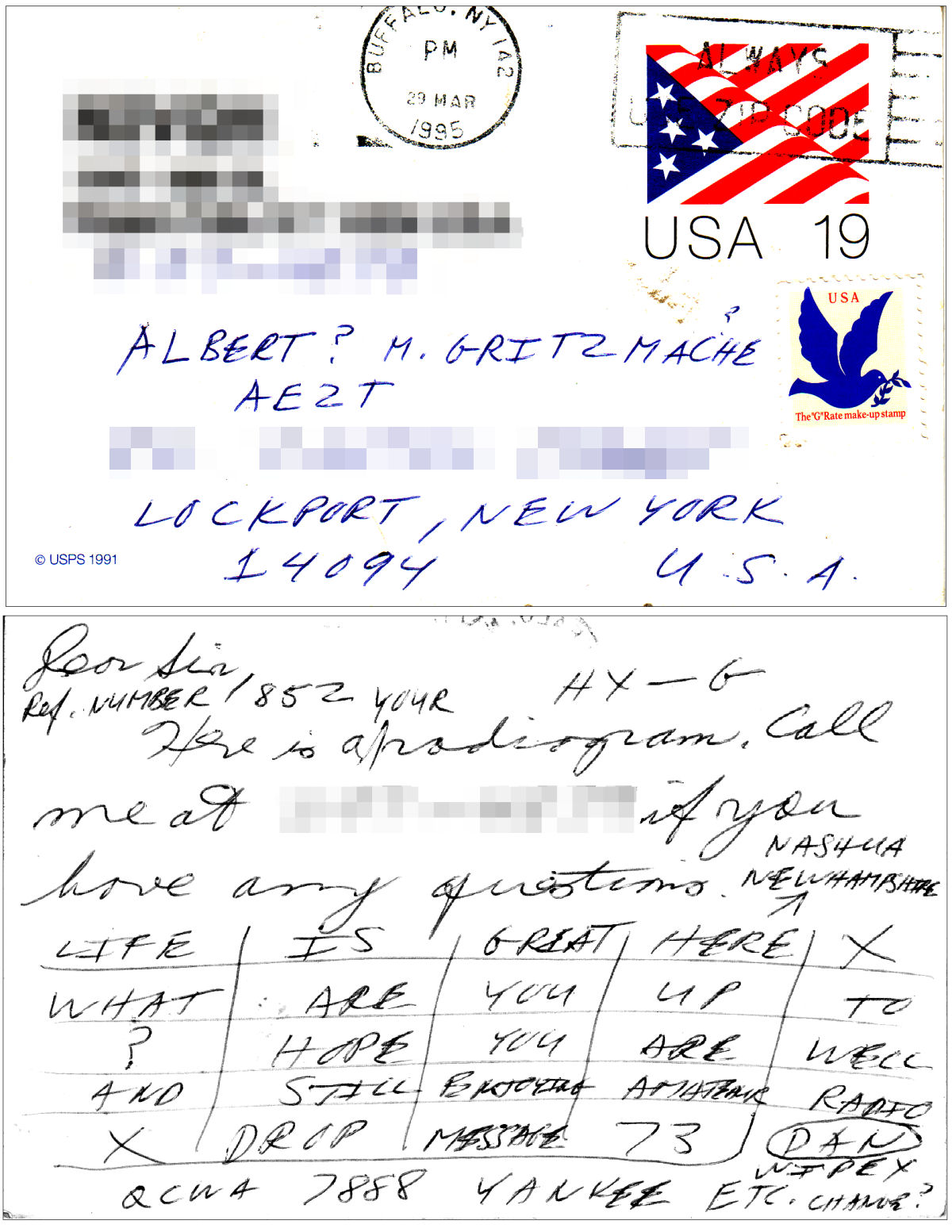 So, I wasn’t surprised to receive a radiogram from W1PEX in 1995 with his greetings fro the QCWA. I must have just joined the QCWA.

But the actual radiogram I received was such a poor example of Amateur Radio traffic handling, that I kept it. I came across it as I cleaned and had to share it here.

This is about as bad a face as you can put on Hams ability to relay messages. While most of the message is there, it’s disgraceful presentation shocked me. I’ve blurred out the delivering Ham’s info out of sympathy for his plight. He probably meant well, but was clueless as to how to properly deliver a message. No doubt this message came through a VHF net to the fellow in Niagara Falls to deliver. I didn’t know him. 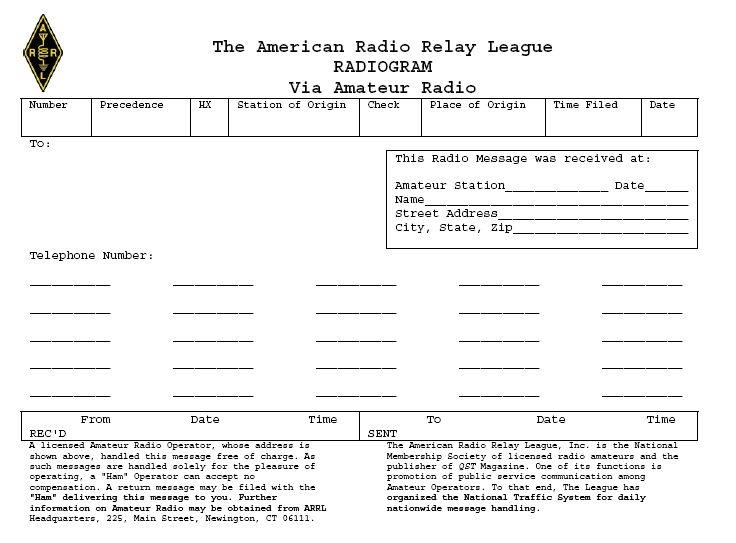 Here’s what a “real” radiogram form looks like. Even filled in by hand, it’s a whole lot more professional looking.

I wonder how much of this traffic is still done on the Ham Bands? I heard a NTS net on the air the other day, so they must still be at it, but I’d imagine a lot of traffic has been shifted to packet (computer) but with cell phones, text messages, IM and everything else, it all seems pretty archaic.

I saw a video of a marine station that was reactivated to commemorate the anniversary of it’s closing. The operator, a woman, at what was once KPH in California, sent a radio message using an old fashioned ‘Bug’ key, just like I used when I was first getting into traffic handling in the ’70s. It felt kind of weird to know that I have learned the same skills – and probably could step in and take over – doing the same job that commercial operators once were hired to do. I wonder how many people will be able to say that in twenty years?

So, that’s the sort of clutter I’m wading through as I clean my “shack.” Now you know why it’s called a shack!