It’s the peak of Bike Season

I went for a ride yesterday with the NFBC, a 50-miler called the Alabama Ramble. It wandered from Clarence out into the Alabama swamps, on through Akron Falls Park and back. It was a hot day, but not as hot as the past week and it felt good to get out and be riding. As usual, I kept with the group for the first half of the ride, then rode the second half with a couple who were taking it more leisurely. Only the last 5 miles or so, I rode alone. When I got back to the parking lot where we started, my vehicle was the only one there. 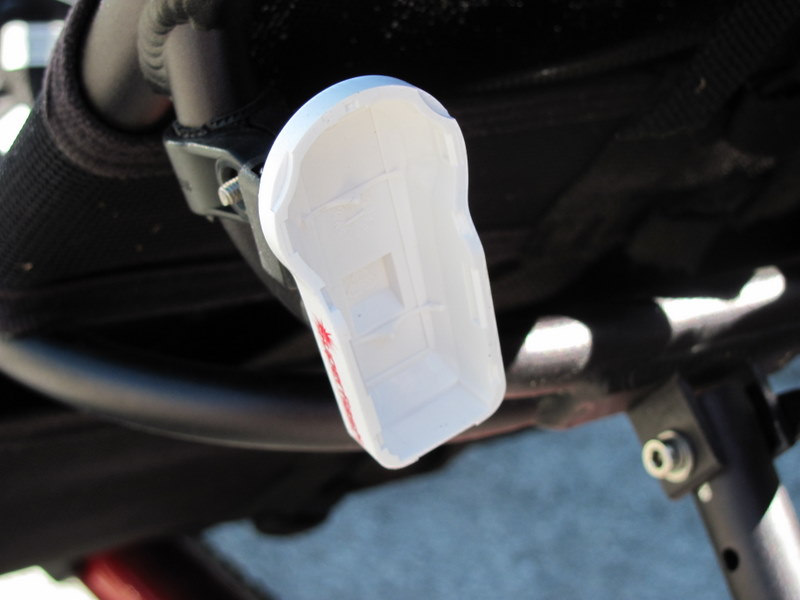 Somewhere along the ride, I lost my SuperFlash taillight. It was on and blinking, so it might be out there somewhere, still blinking in the grass. I probably hit a big bump and it popped loose. It’s a bad design, the batteries, electronics and lens are all in the front half of the clamshell case. The back, which fastens to the bracket on the bike, is empty. All the weight is in the front, detachable part of the light. All that weight is working to open the case with every bump. Most lights have everything in the back and only a light lens cover comes off to change batteries.

Today, after a 50 mile ride, there were a few minor maintenance things to do to the bike. I had a brake caliper rubbing, needed to make some adjustments to the rear derailleur, and finally got around to angling the bar-end shifters outward, so they don’t catch on my shorts. That let me put the handlebars back forward a bit to a more natural wrist angle.

I had just finished all those tasks and took the trike out into the street for a test drive. Just up to the corner and back was all I intended. Coming back down and just as I turned into my driveway, I spotted a couple of bikes with touring gear, followed by a tandem go by the end of my street at Walnut Street. Most of you know, but some might not, I live only about two blocks away from the famous Erie Canal. It’s become a popular recreational trail and a recommended bike route. 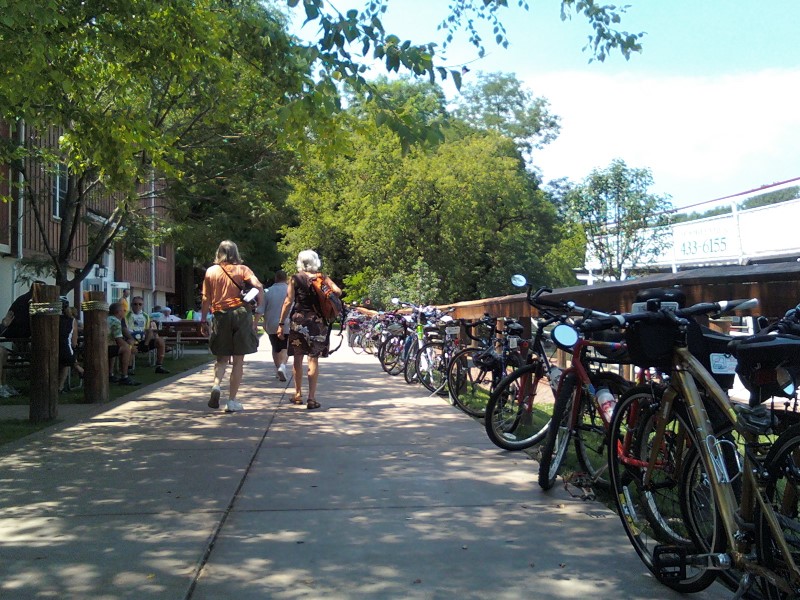 So I took off to see them. No helmet, no flag, no water, no camera, just come-as-you-are. I caught up to them while still on Walnut and there were a bunch more cyclists with them. I was beginning to realize something bigger was going on. So I asked while sitting at a light waiting for it to change. It was annual Parks and Trails New York Erie Canal Bike Tour. Several hundred cyclists had left Buffalo this morning and were on their way to Albany this week. So I rode along for a bit.

I rode along going down Market Street, committing to the eventual climb back up, and saw many, many more bikers of all shapes and sizes. A good number of them were turning into the Erie Canal Cruises, probably the best way to see the locks and canal there is. More were crossing over the bridge and onto the canalway itself. I rode along as far as Cold Springs and turned around in the parking lot there and headed back. Riding against the crowd, I got to see many more cyclists. Mostly conventional upright bikes, some mountain bikes, a few recumbents and tandems, but no other trikes. I eventually came back to the bridge I crossed over and went back to the boat tours. I swung into the lot. There was practically a traffic jam, with bikes coming down the hill and cautiously turning left into the lot all while cars were trying to leave. A tour had just finished and a lot of cars were trying to get out. 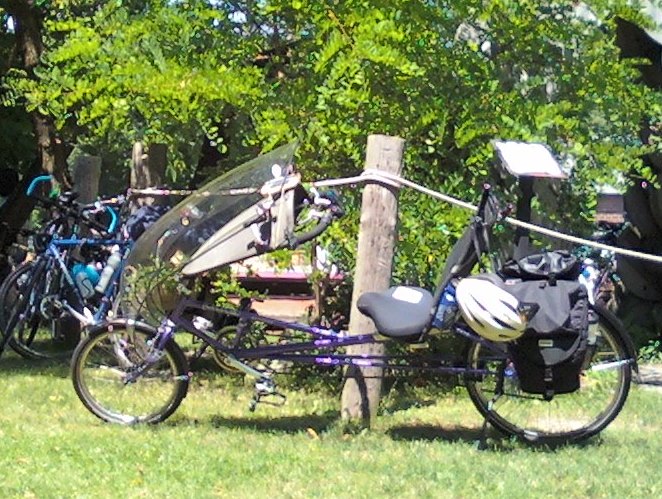 One lady who was leaving waited for me, sitting on the sidewalk. I said “No go ahead. I’ve got my seat here, I’m comfortable waiting.” I really wasn’t in any hurry, I was just watching the whole scene. It didn’t matter where I was. But I soon got into the parking lot and it while it might hold 20 cars when full, there was probably 200 bikes there lining the fence by the docks and everywhere else all the way into the grove in the back. It was quite a sight. Apparently, they were serving food or refreshments and a lot of the cyclists were taking advantage of it as a rest stop, whether they went on the boat tour or not.

I chatted with a few people, including a nice lady sitting in the stoker seat of a tandem recumbent. We agreed the seats were the best part. As I left, another tour boat left the dock heading out onto the canal. This one was full of people wearing cycling jerseys. It was a two-ship day at the canal boat tours.

I headed back home, up the hill, passing a tour bus sitting in front of the tour building. I felt naked without my helmet and flag. I had only just bought the bike flag, and only rode with it the day before, but felt much more visible with it attached to the bike. Unfortunately, being so tall, I have to take it off for transport. Fortunately, that only entails pulling it out of the hole in the back of the seat frame, or dropping it back in. But it was still in the back of my truck and doing me no good there!

Cyclists were still coming down the hill from downtown Lockport and I got a few waves and congratulatory comments for riding up the steep hill. I was glad I made those derailleur adjustments. They seemed to be working nicely. 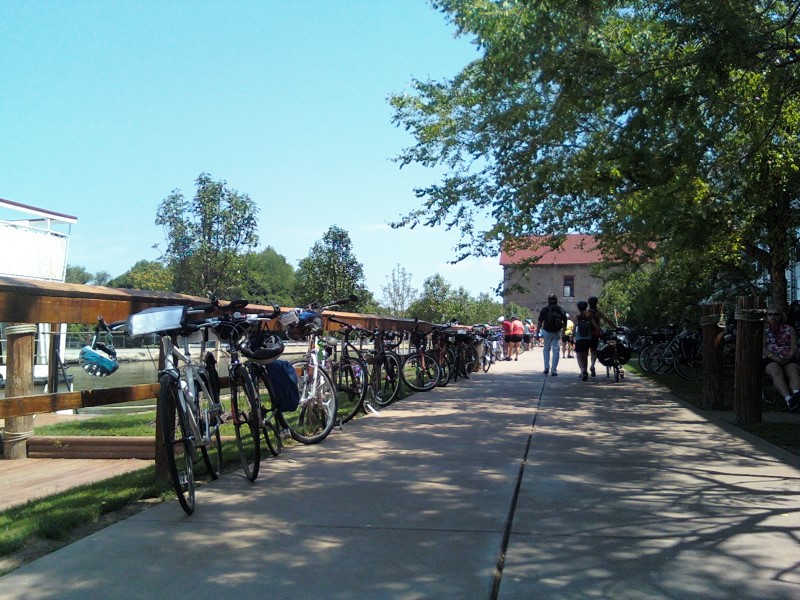 I noticed the route the riders were following was Walnut Street to Locust, then across Main Street to market. I wondered why the ride planners did that, because it bypassed the locks themselves. Lockport has gone to a lot of trouble to fix up and promote the area around the locks, but they just went around them. Had they just turned a couple blocks earlier at Cottage Street, they could have had the option to go down either side of the canal – Main Street or Canal Street (We who grew up here know it as Richmond Ave.) I don’t understand how a tour of the Erie Canal could miss the locks like that!

2 comments on “It’s the peak of Bike Season”