The Blue Team was Here 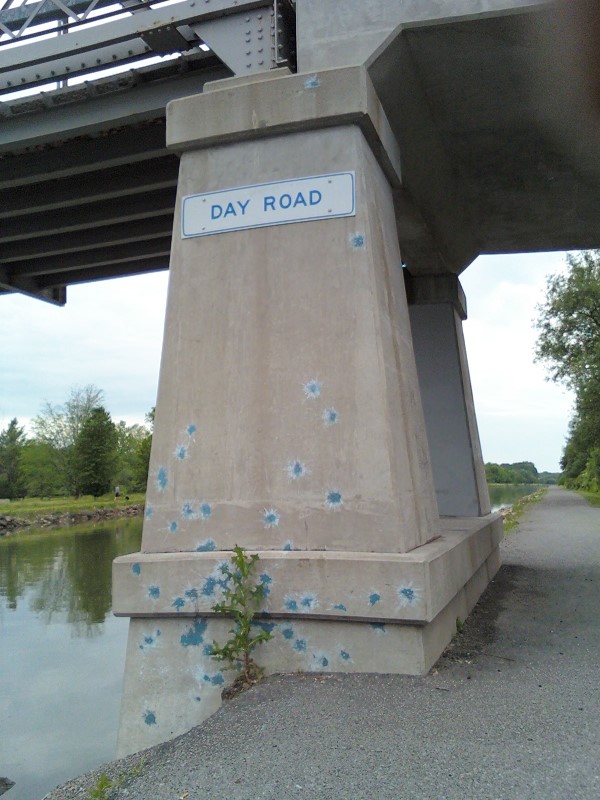 I took a ride today on the new bike before it rained. I parked across the canal in the path parking lot near the Cold Springs Rd. Bridge. I wanted to just take a short ride and check the bike out.

I spent some time today modifying my bike rack to handle the much more awkward trike. I had a hitch rack on my truck that held up to three bikes. I did some measurements and found that if I could rest the front of the bike on the rack, I could rest the rear wheel on the roof of the truck against the luggage rack.

I picked up a piece of 1″ square perforated steel tubing. I had used the same material to build a bike rack for the back bumper of my camping trailer in the past. It’s easy to work with because it has pre-drilled holes every inch and it’s like a really strong erector set.

I removed two of the cradles on the rack that held the crossbars of a bike and installed the square tubing in the place of one of them. A couple of 5/16″ bolts held it in place with just a slight enlargement of the original holes. I can restore the rack to it’s original configuration easily, if I want.

I then put the two cradles on each ends of the bar. Well, almost the ends. They needed to be about 32″ apart, so I used the closest holes. When I tried it, of course, it needed to be just a bit wider, so I drilled a new hole halfway between the existing holes and it now fits nicely.

The back wheel sits just on top of the roof just above the middle brake light. I took a standard ratcheting tie-down strap and with the hooks in the holes on the rack for tie downs, ran the strap through the frame just in front of the rear wheel where the stays join the main frame member. I tightened it up and drew the wheel back until it was against the luggage rack crossbar. This lifts some weight off the bike rack and the whole thing gets nice and solid.

I took a quick drive around the block to be sure it wouldn’t shift or bounce. I had visions of dropping my new bike in the middle of Transit Road, but everything went exactly as designed. So I decided to take a ride and see how it played.

I grabbed my cycling shoes because I had put some old Shimano clipless pedals on the trike. I definitely need to lock my shoes into the pedals to really enjoy the recumbent riding position. I have ordered some other pedals, but they haven’t arrived yet.

I got to the parking lot beside the canal and got the bike down off the truck, got set up and took off. I rode out onto the road again and rode down to Day Road about a mile away. There is a similar parking lot there and access to the towpath along the canal there. I then rode back to the Cold Springs lot on the path.

The bike felt really good today. I took it really fast on the road to see what it could do. I sure am out of shape because I couldn’t keep up the speed for long. But it was nice. It may not be as fast as a racing bike, but it sure can accelerate for a short time. I also decided that I needed to move the seat back at least one notch, as my legs felt like they were coming up too high into my chest and cutting off my air.

I got back to the starting point and felt like riding more, so I continued on towards the locks. I rode the gravel path all the way to the Exchange Street bridge and crossed over it. I took a short break there, taking advantage of the drinking fountain there to top off my water bottle that I had installed a cage for last night.

Then I rode the path back towards Widewaters. I normally don’t like to ride a bike on this part of the path. It’s paved and gets a lot of walking traffic, including dogs that like to stretch their leash across the path! Also Geese. I came up on a few that were right on the path at a point where there was a fence between the water and them. They were cornered and I caught them by surprise. I thought of cutting them close and giving them a good scare, but when one started to flap it’s wings to take off into the air, I gave it some space. I had no desire to get flapped in the face with it’s wings, even if I was wearing a helmet!

I usually ride in the road in this area, but I am still a bit uneasy with the width of the bike in the road. It’s mostly in my head, but I was being cautious.

A few people looked at my bike, but I didn’t get any real stares or remarks. That’s okay with me, I’d rather not have the attention.

I took another water break at the marina before heading out onto the road and across the bridge back to the other side of the canal and my starting point. It was a good workout, for an out-of-shape guy who has done very little bike riding recently. I was glad to finish, but looking forward to longer rides soon.

The bike went back on the truck easily and back home in one piece. This was a shake-down cruise for the bike rack/carrying scheme, so I can head off to some club rides soon.

I wanted to take a photo of the modified rack, but didn’t think of it while the bike was on it and it poured rain later. Instead, I spent some time in the garage moving the seat back an inch.