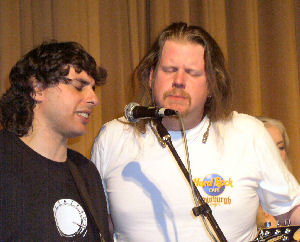 Kilbrannan held it’s final show at the Buffalo Irish Center last night. They left with nary a dry eye in the place. After nine years of performing their unique brand of Celtic-Folk music they have called it quits. And their fans, a loyal bunch always, turned out in force for the last performance, filling the Irish Canter’s hall beyond capacity. It was a testimony to the bands place in their lives and hearts that so many showed up to see them off and wish them well on their new ventures.

The room was set with tables and chairs and was filled to standing room only before the first set. After the first set, it was announced that the tables would come down and more room made for chairs between the sets. Even after doing so, the room was full.

But spirits were high and there were no problems. How could there be? Kilbrannan fans are like a big family, and this was no time for a family spat.

That’s one of the reasons this was such an emotional event. You could go to one Kilbrannan concert and leave, saying you’d seen a good band, enjoyed the music, and had a good time. But go to more than one and you begin to recognize faces. You begin to know the other fans and strike up conversations. To say hello and be recognized by others as a Kilbrannan fan.

I’ve been following this band for several years. I know many of the fans have been with them for the whole time, loyal to a fault. This wasn’t just a band breaking up, it was the end of an era, a shared experience that will never be the same again for a lot of people.

So it was quite an emotional night.

They played three full sets. Kirk clearly gave the set list a lot of thought. Most of the bands catalog was played and everyone’s favorite song was heard eventually. Even an extended Mary Mack, complete with the requisite reggae/Elvis/Beatles/Who/Stones/Jimmy Buffet/Led Zeppelin/etc. versions that we always loved hearing.

But, the night had to end eventually, and when A Parting Glass was played and every fan in the house was standing and holding hands and putting arms around shoulders, there wasn’t a dry eye around.

Kirk, Tim, Paul, Glen and Rob, we’ll see you all again in Penny Whiskey and Stone Row. Thanks for a great ride. It’s truly the end of an era…