Another great concert this Friday and this time all of the billed acts were there. Opening the show was Lockport’s own Handsome Jack who had a good sized crowd of early arrivers to cheer them on. They put on a great show with their own unique updated version of 70’s hard rock. I love their stuff.

Following them was Vancouver BC’s Eric Solomon and his band. I don’t quite know how to describe his music. Kind of a funky-pop that wandered into rock territory as easily as not. His band featured a horn section and he alternated between guitar and keyboards, even using a keytar for a while. It was definitely a great show and the crowd loved it.

But, the reason most people were there was to see the Robert Randolph Family Band. The critically acclaimed group has played in the Buffalo area every year at venues from Thursday At The Square to church concerts and has an enthusiastic following. Their “Sacred Steel” sound is high-energy and had everyone dancing, clapping and singing along.

Randolph seemed to be enjoying himself as well. After leaving the stage, they came back for an encore. Then they came back again, and again. At one point, he said “I hope you don’t mind, we feel like playing a bit more.”

I had never been to a Robert Randolph show before. I had seen their Austin City Limits show, though and have a few of their CDs in my collection, so I was ready and looking forward to the show. It didn’t disappoint me. 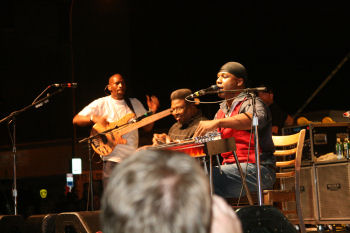 Apparently everyone else was looking forward to the show as well. I hadn’t seen quite so many photographers at the front of the stage as this night. Every local newpaper was represented as well as a few pros I didn’t recognize. The whole front of the stage was lined with them at the beginning of the show. Security did clear them out after a bit.

All except one guy with a VIP pass who stood right in front of me the whole show and seemed determined to keep his head in front of Randolph in every shot. I can only crop so much… so buddy, “Down in front!!” I don’t care if you are a VIP, I came early and stood in my spot at the railing, rather than go get a beer and lose my place. Even the photogs in there sat down when they weren’t shooting.

I could probably pull some strings and get a pass inside the rail, but I’m not like that. I don’t care to be “better” than anyone else. I just hate that elitist attitude in others, so I don’t care to go there myself. It would be different if I were actually working.

I think that the shows may actually be bringing a number of people into Lockport. Whether it has taken a few weeks for the word to get out, or I just hadn’t talked to the right people, this week I met a numbner of people from outside of Lockport. I chatted with a fellow I stood with at the stage who was from the southtowns and also ran into a friend from the Buffalo area there with his wife. So the concerts are bringing people to Lockport after all.

Once again, it’s impossible to estimate the crowd from the middle of it. But I’ll bet this week was even bigger than the past. Great weather hasn’t hurt.

This was the first show that I saw tapers at, as well. There were at least four rigs set up and recording, so I’ll have to check the usual places to see if the recordings of the show are posted.