I do. I don’t know anyone who doesn’t. In fact, while we may disagree about what particular type of music we like, I would find someone who doesn’t like any music weird. 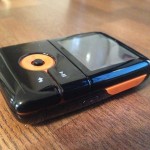 I sometimes listen to music when I can’t get to sleep. I have a small MP3 player that I plug some tiny earbuds into and relax while listening. I put it on shuffle and lie there amazed by the random mix I get. It’s seldom produces any jarring transitions and sometimes plays songs that go together better than I could arrange them if I tried myself. Of course, the first part of the formula is that the only songs on the player are songs I like, otherwise I wouldn’t have put them there.

This is the second Zen V Plus I’ve owned. I left one in a hotel room once and was kicking myself so bad, that I went online and searched another one out. Even back then, it was an obsolete model and I had to go through third party sellers to get one. But I like the small size. It’s like a fat book of matches. And it’s pretty easy to put music on it. I don’t use special software anymore. It shows up in Winamp (another lost cause) and is easily loaded from there.

I’ve squeezed an amazing amount of music into it’s 8GB of memory. I keep MP3s in my collection at a high bitrate, but before I put them on the Zen, I re-encode them to 128k. Listening on little earbuds, you’ll never hear the difference and the space saved is more than worth it.

But, I was lying there and thinking. How long until the battery in it give out and won’t hold a charge? What will I do when I fill the thing up? What is the current state-of-the-art for MP3 players? I looked into it later and I was shocked.

The ubiquitous smart phone has all but killed off the standalone MP3 player market. Only a couple of the big players still offer anything at all in the niche and the pickings were slim. 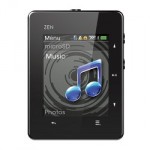 The Creative Labs, makers of the Zen V Plus and others, had one offering. It was amazing. I was ready to buy one on the spot. It was out of stock and appears to be no longer made. It was called the X-fi3 and wasn’t much larger that what I had, but included a Mini-SD card slot (what to do when I run out of room) and had built-in bluetooth ability. That’s right, wireless headphones. I could lie in bed with some bluetooth ear buds and leave the player on the nightstand! If I could only get one. They are just about unobtainable. Only used or display models are left at Amazon or Ebay and the prices are jacked up beyond the original retail price.

How come a device like this that has features I really like and fits my lifestyle doesn’t come onto my radar until after it is gone?

There are a few replacements for the V Plus out there. The Sandisk Sansa Clip is virtually a clone of the V-Plus, but has Mini SD card capability. It’s also quite affordable.

Apple still makes a couple of music products, but, well, they are Apple products and won’t be found here in this anything-but-apple household. Besides, they don’t really offer any new or compelling features, either.

So, what about not fighting it and using my phone or tablet to play my music collection? I could do that and have done it. My phone sits on a wireless QI-charger on the nightstand and I could listen to it even while it charges. I have done it. And I could use a bluetooth headset with it. I’ve also listened on my Nexus 7 tablet. Both are Android devices. I use Google’s music player on them and it’s pretty convenient to load songs on one computer and have them available on all the other devices. So why not just do it and not look back?

Well, for starters, the Google music interface is horrible. Selecting music I want to listen to is a chore. I can’t figure out how, or if, I can make a playlist to listen to. It seems to be oriented to listen to a album or artist. even putting several random albums together to play is complicated. But, let’s forget that. Someone might come up with a better player tomorrow.

The other thing is size. Even a smart phone is too damn big.If I go for a walk, or jog (HA! Yeah, right.) I don’t want the phone banging around in my pocket. The little Zen is un-noticable, and even if I snag the headphone cord on something, it’s so small and light, it just dangles on the end. Do that with a smart phone on the other end and you’re going to be buying new earbuds after the cord rips apart.

And then there is battery life. If I’m using the smart phone to listen to music, I’m sucking the battery down, and lets face it, smart phone battery life sucks. If I need it as a phone, I don’t want the battery used up playing music. I often carry the phone along on bike rides and use an app to map the ride information as I go using GPS. Turn on bluetooth too and I won’t get to lunchtime with the battery. But the little Zen player goes on playing and playing on it’s little battery. I don’t know how long it goes on one charge, but it’s so long I don’t worry and usually go for several heavy uses before recharging.

So, smartphones are killing the MP3 player market off. It’s not the only thing going the way of the Dodo because of smart phones, either. Small point-and-shoot camera sales are dropping too because every phone has a camera in it now and every new model has a better one. At least you can still get a camera, but the choices are getting fewer and who knows what will be available in 5 years. Camcorders are already noticeably reduced in offerings due to smartphone ubiquity. And have you tried to buy a PDA lately? Well maybe that is one device that deserves to go extinct!