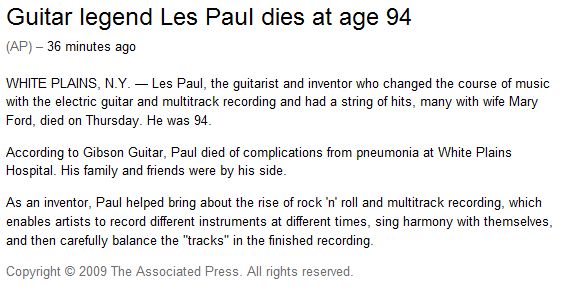 Last night, I was looking at the web site for Heil Sound. I was sort of window shopping for a microphone, but ended up getting distracted – like I often do on the internet – and was browsing through the photos on Bob’s site. 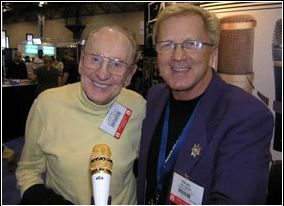 I came across this photo, of Bob Heil with Les Paul and a shudder went down my spine. Here was an image of two men, possibly THE two men, responsible for modern sound recording technology. Each of them came up with equipment and techniques that, while not wiz-bang super-new technology, the way they applied their knowledge to a problem they saw changed the way that music recording and live sound amplification was done almost universally.

Little did I know, the next day, I’d be reading that Les Paul had died.

I knew who Les Paul was, of course. I enjoyed his music and knew of him as a talented guitar player. But until I saw a movie documenting his accomplishments – Les Paul: Chasing Sound – did I realize how much he had done in pioneering multi-track recording and overdubbing. Before he changed the way tape recorders were constructed and used, all music was recorded as a live take, flaws and all. His technique allowed recording parts of the music separately, even at different times or places. That practice is common place today, but was revolutionary at the time.

Bob Heil, a keyboardist and music shop owner in Illinois, and incidentally, a Ham Radio Operator, also saw a need and developed equipment and techniques to fill that need. Bob developed the modern mixer, used in studio and live performances and went into a career as an in-demand sound engineer for groups like The Who, Greatful Dead, and the Eagles. Today, he has developed a line of microphones considered by many the best dynamic microphones made.

I first heard of Bob Heil back in the late 70’s when he wrote an article or two about converting cheap CB radios to 10 Meter Amateur Radio use. I bought a circuit board and some other parts from him for a 10 Meter FM radio. I built it up and had a lot of fun with it, working through repeaters in the Virgin Islands and Colorado.

Bob’s line of Ham Radio accessories, mainly microphones, have been legendary. I’ve used one of his Pro-Set headphone-boom-mike sets for so long that it’s in need of a good restoration. He’s seen at many a Hamfest giving his demonstrations of his microphone elements tuned for communications use, another need he saw and stepped in to fill. The line of Ham microphones was a stepping stone to his getting into the professional microphone market.

I remember standing in the Dome Arena at one Rochester Hamfest many years ago, chatting with Bob as the hamfest wound down. I don’t even remember what we were talking about, and I’m sure he didn’t know me from Adam, but we were fellow hams just talking shop.

You can imagine my excitement, a few years later, as I stood at his exhibit at the Rock and Roll Hall Of Fame in Cleveland, practically grabbing strangers and saying “I know him!” He’s the only manufacturer honored by the Hall of Fame.

But I’m still saddened by the passing of Les Paul. The thought that we’ll never see him standing next to Bob Heil again, basically summarizing the recording technology innovations of the 20th Century, is so sad.

Here’s a video of Les Paul with an appearance by the late Chet Atkins (another Ham Radio Operator, as is Joe Walsh of the Eagles.)