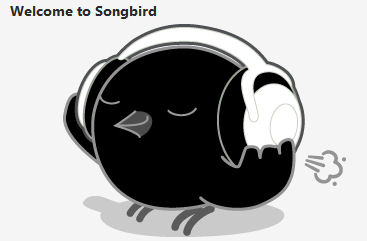 I’ve made a couple posts recently about free software that I’ve found useful. One of the most used pieces of software on any of my computers (and I have too many) is a media player.

First of all, media player covers a lot of ground. I divide that into two camps: ones I use to listen to audio and ones I use to view video. Most of them try to do both and often it is this Swiss-Army-Knife approach that limits them and annoys me.

As I mentioned in one other post, my long-time favorite music player, Winamp, will play movies, but I’d only use it as a last resort. Actually, my favorite video player, one I use all the time for watching both downloaded video and DVD discs, is the lean and simple VLC player. In full-screen mode, there are no annoying player buttons that pop up if you bump the mouse, but everything you need is found in a popup right-click menu. It has screen format options that none of the fancy DVD player programs have.

But, I don’t want to rehash all those programs. Instead, I want to mention a new audio player that I just found out about. It’s called Songbird and is another project that comes out of the Mozilla program. I don’t know when it came out, but it’s now in version 1.0, which is the initial public release.

The first thing you’ll need to know – and they’re pretty up front about warning you – is that you won’t be able to run this on an old computer. I loaded it on a 1ghz Pentium III computer and, while it installed and ran, it was so painfully slow that it was useless. Then I had it index the first drive with about 25,000 songs. Come back tomorrow! I ended up uninstalling it.

But I’ve put it on two other, more modern, computers and it’s totally functional on them. Songbird looks like it’s trying to imitate iTunes, or it’s cousin Quicktime, something I wish they weren’t doing, but if the goal is to wean people off of iTunes and into an alternative platform that supports all portable media players and sources, then it might be a necessary evil. Of course, one of the features of Songbird is the customizable look and many skins are available to change it’s appearance. 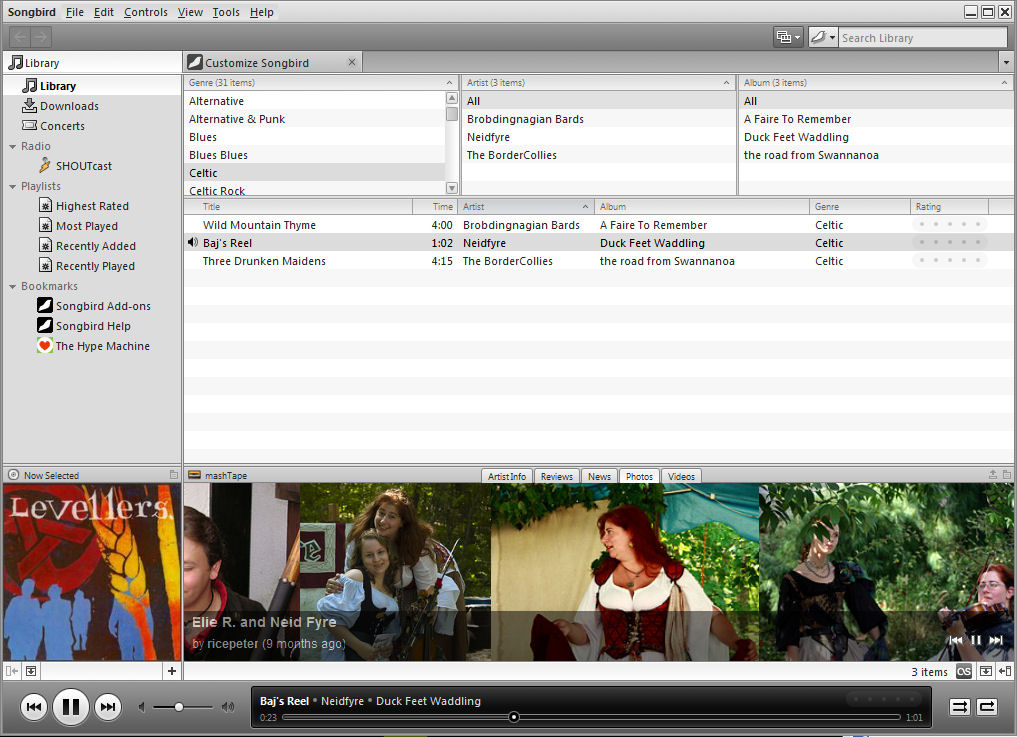 One of the neat features Songbird has is the ability to display other information based on the song playing. The photo stream actually goes out to the web and finds photos that match the artist information and finds pictures to go with the song. Sometimes they’re right on the mark, sometimes they are funny. It also can show reviews, artist info, news and videos based on the song playing. It’s not perfect, but it’s better than the “I’m Feeling Lucky” button on Google.

I’m not entirely comfortable using it yet. I have yet to put it on a computer that has a large collection of songs, but I will try it on my main music computer, which has over 100k mp3 files. My wish is to find a program that, once it has indexed what is available, can search through songs quickly. Winamp’s Media Library does it, but a search sometimes take 15 seconds or more to find results. Worse, sometimes the player hangs up while it’s doing it.

My chief complaint about the music players out there is, they spend more time and effort on making “skins” or “visualizations” than they do making them a good manager of the files. Most people don’t have over say, 10,000 songs, so they don’t care. The programs are fast enough for them. But real collectors need something better. I’m hoping Songbird does it.

The whole Songbird program seems to be built on top of the Mozilla engine. There’s a sidebar on the left, but tabs open across the top just like a browser. All of it can be changed and customized, although it’s not intuitive how, other than getting plug-ins or add-ons where someone else has done it for you. But it shows promise and it’s a early release. I’m sure there will be a lot of maturing before it becomes a mainstream product.

Another interesting idea Songbird has is the ability to check for concert listings in your area based on the artists in your collection. I haven’t tried it on a big enough collection yet to really produce any results, but I’m curious how effective it will be. If it drills down to smaller venues it could be really useful. If it only shows stadium shows, or events handled by Ticketmaster, it would be useless.

Songbird also has built-in support for Last.fm. If you use an audio-scrobbler plug-in for your current media player, all you’ll need to do to use it on Songbird is set it up.

I’m not going to say I recommend Songbird, but I’m going to say it’s worth watching. If it follows the other Mozilla projects path, it could turn into a finely-polished and useful tool. Keep an eye on it. It’s free to try out too, so there’s nothing to lose.