On the eve of the arrival of my newest bike, fourth recumbent and second trike, I can tell you a lot about it already. 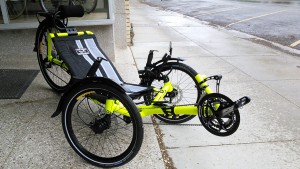 No, not the specs, although there is a lot to tell there. I ordered it with a lot of extras and customizations that the stock Expedition doesn’t have.

I can tell some things about it, though, that you might not think of unless you hang out with some of the recumbent nuts out there.

First, it will not have a name. I don’t name my bikes. They are things, inanimate objects, not a person or even an animal. I will not anthropomorphize it. Many people do feel compelled to attribute their bikes with some kind of personality and give them a name. I’m not going to name something I might take a wrench to and disassemble. 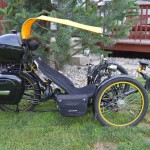 Trike with a clown-car canopy

Also, I will not doll it up. I won’t turn it into a parade float or clown car. It’s bad enough that I might load it up with camping gear and take off on it. I won’t load it down with flags and too many mirrors and lights, and above all, it won’t have a canopy. I’ll have lights. Enough to insure my safety and enough to have redundancy, but I won’t look like a little cop car. I’ll have a daylight-bright rear light and a couple choices of nighttime rear, red lights. Enough to cover any situation, but not overdone. And no lazers putting lines on the road. I’ll have two headlights. One to see by and one to be seen.

I’m not a big proponent of flags, either. I may use one judiciously, but basically, their use is overrated. 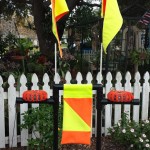 Too many flags and lights!

Some people say that because recumbents, especially trikes are low, auto drivers can’t see them. I don’t believe that. We don’t ride along under some fog layer that obscures us and the road. If car drivers can’t see something low, why are there lines painted on the road? It’s more about making yourself visible – and relevant – to auto drivers by riding in the right place. I won’t get into a discussion of proper positioning on the road here, but if you are off on the shoulder, you become irrelevant and therefore invisible to drivers, no matter how many whirlygigs you have trailing behind you.

And I will never have a canopy. I will not make this trike look like a little golf cart or a clown car, no matter how hot the sun gets. I will wear a hat and slather on the sunscreen, but I won’t cross that line! 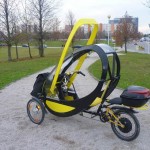 Just wrong on so many levels!

It’s bad enough some uninformed people think that trikes are for old, infirm people. People who can’t ride regular bikes. I’m neither. I can ride a regular bike, I just choose not to. I can and do ride a two-wheeled recumbent, but trikes are a lot of fun too. But I’m not going to reinforce the misconception by making my trike look like something out of a Florida retirement village.

If you’d like to see more photos of the trike, and some clues as to what I’ve changed from the stock bike, click on the photo above. It will take you to the page at Utah Trikes where they posted my trike once it was done being built.