A Tale of Two Commuters 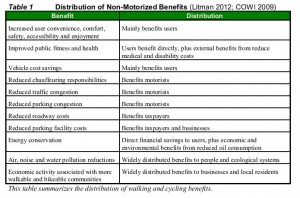 Meet Joe and Bob. Both live in Suburbia, a nice bedroom community where they enjoy the amenities of suburban life. They both work at an office in Big City and commute each day to their jobs.

Every morning, Bob hops into his car and drives to work. He gets on the expressway and makes good time in his commute, that is until he hits the traffic jam, where he sits, idling as traffic creeps along. Finally he gets off the expressway and navigates the congested city streets for several blocks until he reaches his parking lot. Once there he parks. Wow, the monthly fee for parking has gone up again! Darn! Then he walks three blocks to his office.

Joe gets up, drives a mile or two to the Light Rail station, where he parks for free, walks a few hundred feet to the station and boards the train. His monthly pass costs much less than parking in the lot in Big City. The train is well under capacity, so he has no problem finding a seat. It’s a shame more people don’t ride it. Sometimes Joe reads a book while on the train, sometimes he listens to music or NPR, which relaxes him and he arrives in a good mood. Sure, riding the train takes some time, you have to wait for it to arrive at the station, but once underway, there are no traffic jams. Joe arrives at the station nearest his office and walks about a hundred yards to the front door. Some days, he gets off one stop early and stops in to a coffee shop for a cup of coffee. The extra walk is good exercise.

When Joe gets to the office building, he holds the door open as his neighbor, Bob, walks up. “Good morning Bob!” says Joe, but Bob only grumbles something about the traffic and hating driving every morning…

This little bit of prose came to me while I was reading a study from the Victoria Transport Policy Institute titled Whose Roads? Evaluating Bicyclists’ and Pedestrians’ Right to Use Public Roadways. It made quite a few good points.

First, we are all pedestrians. We don’t levitate to our cars, do we? No we walk, sometimes a fair distance.

Next time you see a pedestrian or cyclist on the road, don’t grumble, thank them for putting one less vehicle on the road.

Gas taxes and road use fees only pay for part of the road cost and only on major (usually state operated) roads. The bulk of road costs come from general taxes – property and sales – that we all pay. In fact, considering the amount of wear and damage pedestrians and cyclists (don’t) do to roads, compared to motor vehicles, they are overpaying!

Sometimes, you just need to get out from behind the wheel to get a different perspective.