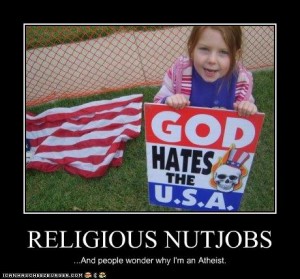 Is it just me or do those people standing on street corners and at every public event think we all are headed straight to Hell? That their little tract will make a difference and send us on the straight and narrow?

If you’re one of those people, let me tell you with love in my heart, not anger, that you really piss me off. You don’t know me. You don’t take the time to get to know me and learn my religious views or background, yet you make a judgement that I need your saving. That your beliefs are correct and mine are not. That I cannot possibly be saved from eternal damnation without your assistance. 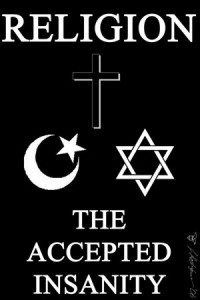 That’s why I get so angry when you interrupt my train of thought on my way to an enjoyable event with your condescending proselytizing. Your assumption of my religious status is insulting. Your insistence on forcing your religion on me is offensive to me. Even if we share the same beliefs.

What do you call it when someone judges a person without really knowing them? By their appearance or your assumption of their demeanor? It’s prejudice. Religious prejudice, in this case.

We are in the United States of America. A country founded, largely by Christian people, many of them fleeing religious persecution themselves. I can stand on a street corner here in Lockport and count a dozen Christian churches within a mile of me, yet be assaulted by a bible-blathering, scripture-waving zealot during any of the summer concerts. My recent trip to Niagara Falls and Goat Island to watch Nik Wallenda, was marred by these people – not just once or twice, but at about every ten foot intervals. Literally. It was like running a gauntlet.

It’s ironic that Nik Wallenda, a man whose religious belief is well-known and respected, doesn’t use his status to promote it. He chooses to be an example. But because of that, these nut-jobs seemed to home in on the opportunity to assail his fans.

This is not the frontier. We’re not missionaries and Indians. This is not the Third World. The large majority of people in the U.S. are raised in some form of Christian church and most of them follow those beliefs.

Sadly, that percentage may be in decline, but I have to wonder how much is due to the small-minded attitude of these “only my religion has the true answer” groups. Come on. You can’t all be right and the rest wrong. The reality of it is you are all partly right and mostly wrong. You’re human and your understanding is flawed. As the late Rodney King said, “Can’t we all just get along?”

I’m not going to get into my personal beliefs here. After all, the whole point of this post is to not be inflicting them on others, but I am continually irked by the small-minded, indeed mindless, attitude of many Bible-believing sects out there that are the worst offenders. My beliefs are just that, mine. They’re personal and unique. They are not wrong. They work for me. They might not for you. Don’t suggest that yours are better or I should adopt yours.

You don’t need to get into peoples faces to convert them to your religion’s way of thinking. In fact, it’s probably the worst way to enter an intelligent discussion about it. You’d think you’d have figured that out by now…

I’ve had enjoyable conversations about religion with Mormon (LDS) Missionaries, with Seventh Day Adventists, and friends of all beliefs. We all walked away with respect for each other’s views and maybe just learned something about each other. But the in-the-face approach just isn’t the way to do it. 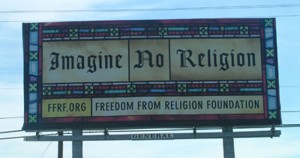 This country espouses a concept of “Freedom of Religion.” You simply can’t have true freedom of religion with out “Freedom From Religion.” Our constitution guarantees that you cannot impose a religion on anyone.

So stop sticking your tracts in my face.