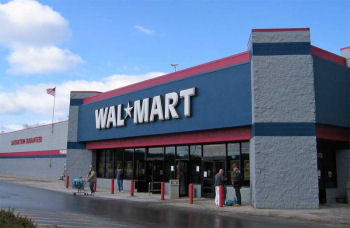 Yesterday, I was listening to our local radio stations’ call-in talk show. The main topic seemed to be the latest lawsuit trying to block the Wal-Mart Supercenter proposed for the Lockport Mall location.

A lot of the people seemed to want to know who exactly was behind the Lockport Smart Growth, or as Scott Leffler, the show host referred to as “Citizens for No Growth.” There was speculation that there was ties to both the owners of the local Tops store and Lockport Developer David Ulrich. No one seems to know at all who are ‘members’ of the group, but the idea to “follow the money” seemed to be the idea. But it might be hard to do.

What if Wal-Mart itself, were a secret contributor to the Smart Growth group? I’m not saying it is, but my evil side wonders. It wouldn’t be hard to funnel some money their way through some intermediary. Wal-Mart seems to be benefitting from their efforts as much as Smart Growth thinks they are hurting them.

Think about it, the economy isn’t the greatest right now. If Wal-Mart could put off development for a year or two, while enjoying the all the benefits, it might be a viable option.

Meanwhile, they opened a new Supercenter in the Town of Niagara and are working on one in North Tonawanda.

The Lockport Mall was opened around 1972. It contained movie theaters, restaurants, shops and several anchor stores that remained mostly constant over the years. The original tenants included a supermarket and a discount department store in the location where the only surviving store, The Bon-Ton, is. At the time Wal-Mart first proposed the supercenter, the mall was nearly full, probably as full as it ever was. While not full of trendy, upscale stores, it was, nonetheless, viable. We got to watch it die, one store at a time, after the Wal-Mart plan came out.

Why does Wal-Mart want to open a so-called supercenter? The site can only support a building slightly larger than where they are now. The present site, probably could be expanded to a bigger building than the mall site.

Here’s my take. Wal-Mart proposes the supercenter on the mall site. The bankrupt owner of the mall jumps at the chance to get out of their situation and the tenants of the mall begin to either close or relocate.

Most of the decent stores where you could go to buy clothing, shoes, or specialty items in Lockport, other than Wal-Mart, were in the mall. A lot of competition was eliminated simply by suggesting that Wal-Mart wants to build a the mall site.

Meanwhile, the competition, pitiful as it was, at the Lockport Mall, has been eliminated. The lawsuits and publicity generated by the smart growth group keeps Wal-Mart in the news almost daily. You know what they say, the only bad publicity is no publicity. Plus, when competitors, say Target, or Wegmans, look into Lockport for possible expansion, what do they see? Smart Growth and lawsuits. They probably figure it isn’t worth the effort and walk away. Another plus for Wal-Mart.

So who wins if Wal-Mart builds a Supercenter at the mall site? We get a so-called supercenter in a site that isn’t significantly bigger than where they are now and an empty building where they are. We already have a huge surplus of retail strip mall space on the Transit corridor.

Who wins if Wal-Mart is blocked from expansion? Business as usual goes on for Wal-Mart, while the competition from the mall is gone and new competitors are driven away by all the fuss.

So, while I don’t really think Wal-Mart has anything to do with Smart Growth, you’ve got to wonder how they could have had things go their way any better if they had planned it all themselves. Wal-Mart’s Supercenter is a long-term plan and they don’t care if they do it in 2005 or 2015. But it will happen eventually.

The real shame is that if Smart Growth hadn’t been an unwitting pawn in their plan, we might have had a Target or a Wegmans to compete with Wal-Mart here in Lockport.