Nik Wallenda (no relation to Nikola Tesla, right) has been practicing the past two weeks for his soon-to-be-attempted wirewalk across the Horseshoe Falls on June 15th. His last scheduled practice run is scheduled to be tomorrow, Tuesday May 22nd. I went to watch today.

My choice for getting there was to drive to the little LaSalle Park near the Grand Island bridge and ride in the bike path on my Trike. I’d ridden there before, but this is the first time I parked there.

The park was kind of small and not much to see when I was there last year, but a nice location and not a bad place for a picnic by the river, maybe combined with a little fishing. There always seemed to be a few people there enjoying it. When I pulled in this time, I wasn’t sure I was in the right place. I thought, at first, I had pulled into a parking lot for some apartment complex next door. But no, they’ve redone the whole parking lot and it’s first-class now.

I rode down the path into the city and on into the Niagara Reservation. I crossed over the bridge to Goat Island, which is a particularly nice place to see both falls from. You are actually in the middle between them.

After that, I rode out to the streets and made my way over the the Seneca Niagara Casino where the practice sessions were being held. They set up a wire – the actual wire they will be using, I believe – to allow Nik to practice for the actual thing. I had seen it on TV; the media attention has been relentless, but was not really prepared for how long it was. It ran for two city blocks. They actually closed off a street so that it could go over it. The end closest to the casino was the highest end, supported by a crane. The wire sloped down to the far end, where it was much lower.

His practice, I found out, was scheduled for 3:30pm. It was about 1:00. I had time to kill. I rode around the park near the falls some more and around the Falls Street area. It’s a nice area on a bike. Touristy, but due to the low occupancy rate, not bad. Traffic is light and not aggressive and the tourists you do see seem amused by a guy riding a trike around. 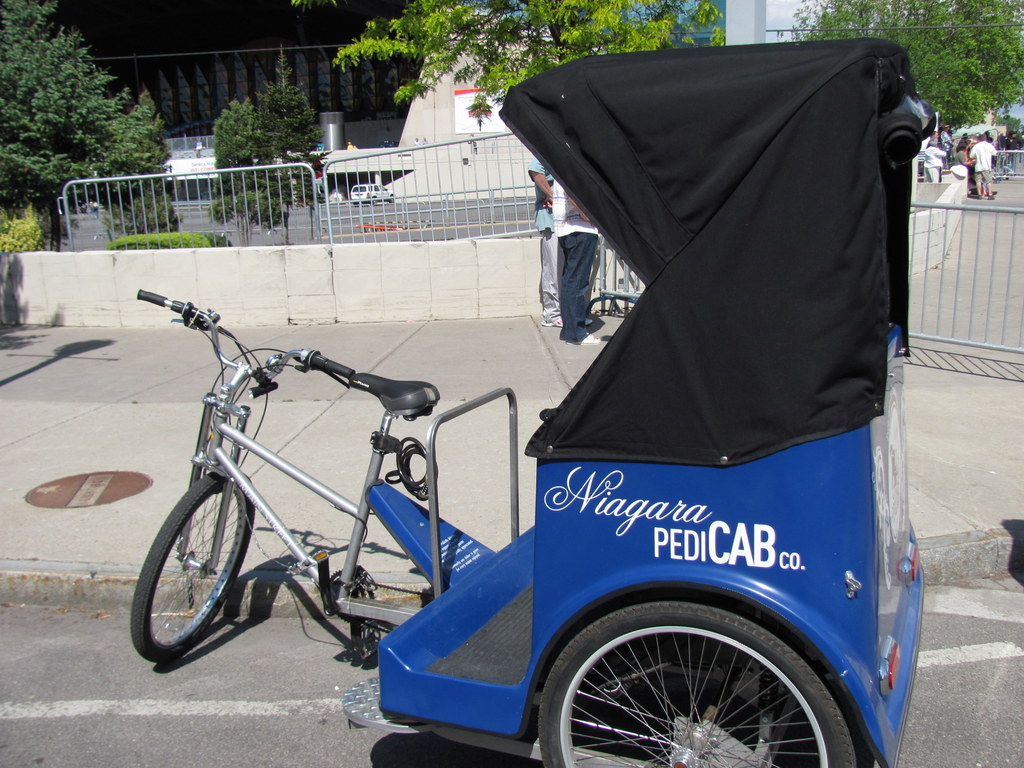 I ran across a guy pedalling people around in this pedalcab a couple of times. Later, while the wirewalking was going on, he was there and I got talking with him a little bit about his bike. He’s been doing it for two years now and he’s the only one in Niagara Falls. A ride with him is pretty inexpensive (starts about $10) and it seems like a good way to see the area. He’ll do anything from a ride around the block, to a trip to a specific location (like a cab) or up to a full guided tour. He’ll even take you to an attraction, like the Cave of the Winds, drop you off, and come back for you when your tour is over. 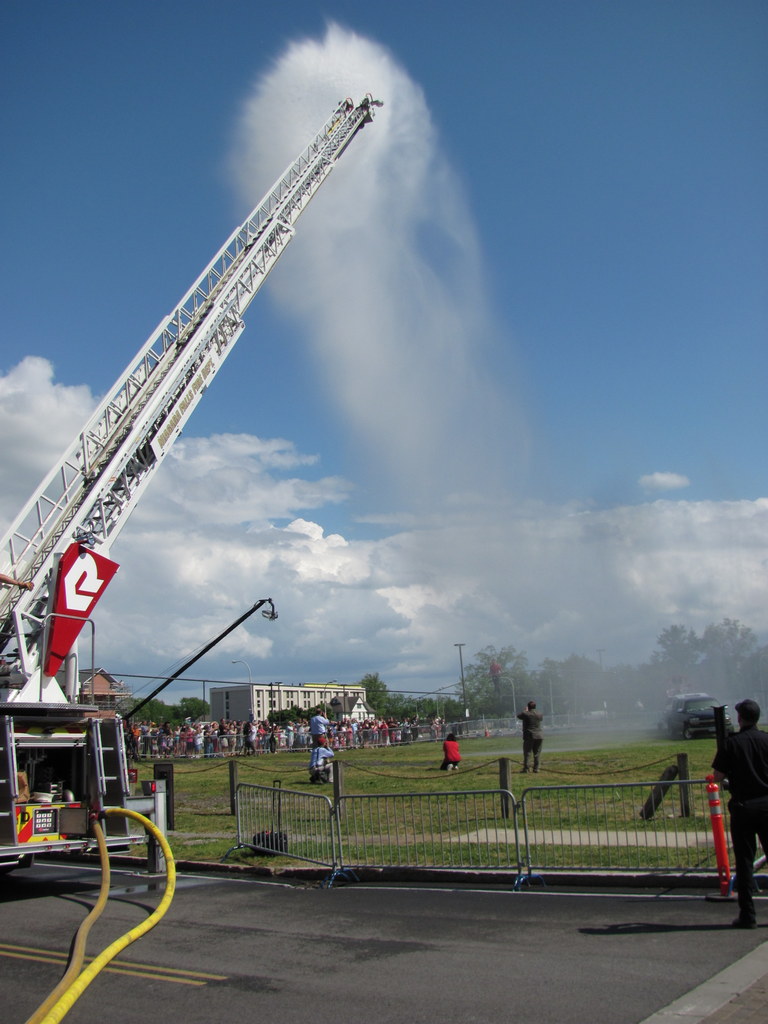 After killing the time, which included lunch at a conveniently nearby TGI Fridays, the practice walk started. On the agenda for today was simulating walking the wire with wind and heavy mist. The Niagara Falls Fire Department was called upon to supply the mist. The wind was supplied by one of those flat-bottomed fan-powered boats you see in the Everglades. They had one trailered in and fired up the prop to make wind.

Wallenda didn’t seem to have any trouble with the wind or water, but it must have been a miserable time up there. He didn’t spend much time on the wire today and only walked in the first block. Those who sat in the bleachers expecting him to walk down that far were disappointed. 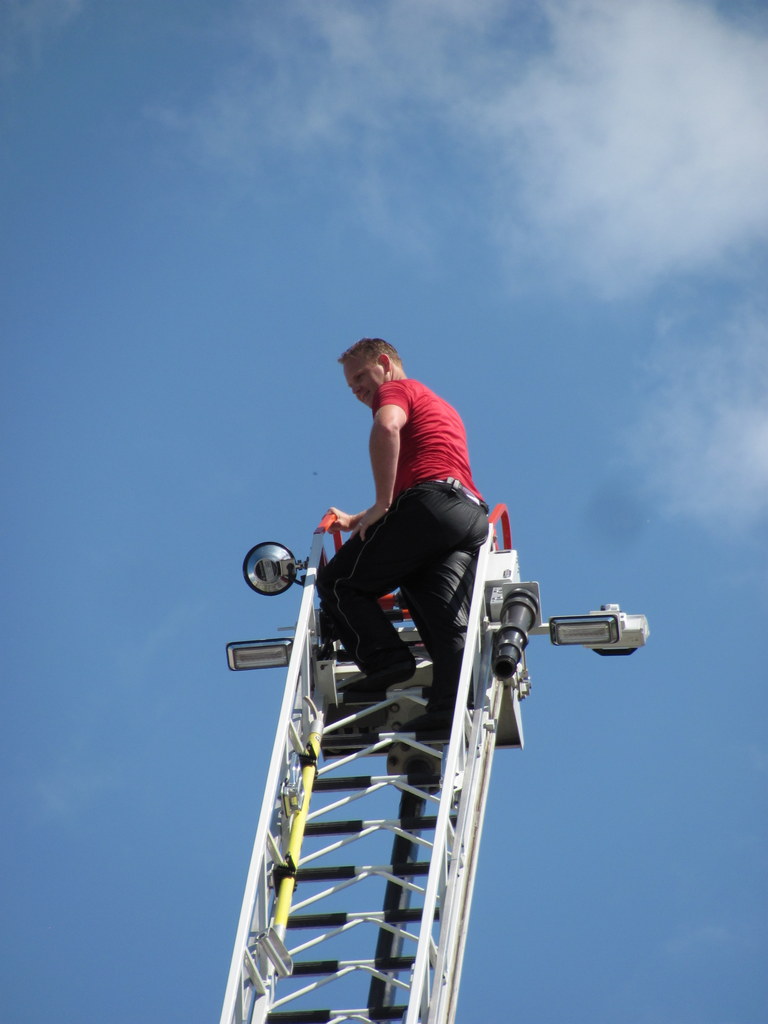 He wrapped up his practice when he was sure the water wasn’t going to affect his walk. But he still had fun, running up the ladder on the fire truck.

After that, he satisfied the people in the bleachers by going over there where they had a small stage set up and held a press conference where he answered questions from the reporters there and then from the audience. I think the audience asked better questions.

After that, he signed autographs and posed for photos with people. He was very generous with his time, staying around and talking with everyone who waited for him.

I waited around until the crowd dissapated, then worked my way up to the barrier he was at. I asked him if I could take a picture of him sitting on my trike. He answered “I’m not sure I can do that.” and looked over at his brother, who is his manager, who said “Sure. Go ahead.” But by then, he had turned to someone else and was signing another autograph. So, it wasn’t an outright “no” but I didn’t get the photo. Maybe if I had stuck around until there were even fewer people and he could come out from behind the barriers he would have. Maybe not. you never know with these things. They have so many contracts and marketing agreements, that maybe he simply can’t do something that could be construed as an endorsement of a product.

So, I’m not disappointed, but it would have been a cool photo. Here’s video of todays’ walk.

The entire album of photos from today are on my MyOpera photo page.