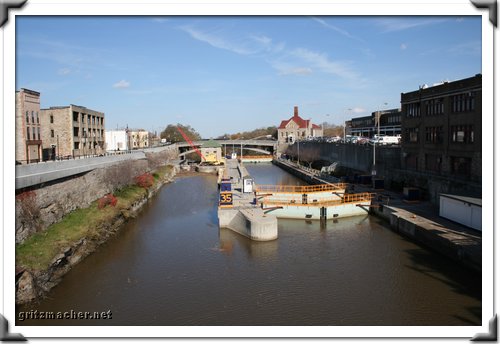 It was a nice day, so I took a walk to the Post Office and took a camera along.

I wanted to use my new camera. Yes, I bought a new toy. I’ve been wanting a better digital camera for almost a year. With the amount of photos I take for my podcasts, I thought it was justified. The old Olympus C-4000 is getting flaky and just doesn’t cut it anymore.

So I bought myself a Canon Digital Rebel XTi. It’s a digital SLR, so I’m back to about where I was in film cameras a couple years ago. Interchangeable lenses and total control of every aspect of the cameras operation, if you want it. If not, it goes full auto and is practically point and shoot. I picked up a 300mm tele-zoom lens as well as the 75mm zoom that comes with it.

It’s 10M pixel and the detail in the photos is amazing. The scaled-down photos on the Flickr site don’t do it justice. (I shrunk them to 600 pixels wide.) I took over 250 photos in the highest quality setting and didn’t even get close to filling the 4GB flash card I got.

So, anyway, if you’re curious about the city and canal, here’s some photos to browse.

Unfortunately, I filled up the Flickr account, so what you see is all you’ll get, for now. It’s really the Robotics team’s account, but since Yahoo took over Flickr, they force you to use a Yahoo account to use Flickr and I don’t want to use a Yahoo account. I have one, but it’s such a spam-magnet, I’ve let it go dormant and the email address associated with it is dead. I won’t update it because of the spam. I’m not getting on that merry-go-roound again. Why couldn’t Google have bought Flickr?

So, eventually, I’ll have to either bite the bullet and get set up on Yahoo/Flickr or find an alternative. Then I can delete the personal photos and let the Warlocks have the space back. (Actually, we have a full-fledged photo album Gallery area on the Warlocks web site, so the Flickr account wasn’t being used for much.)

I made a slideshow page of the same pictures and put it on this server, so go ahead and check it out. We’ll let Flickr alone.