Whether I’m out riding or not, I’m thinking about it and how to do it better. In pursuit of self-sufficient power for extended overnight tours, I’ve been playing around again with generating power while on the road.

I came across a post somewhere on the internets about charging 5v USB devices off of an old style generator like used to be used for headlights on bikes. Technically, they are dynamos, but I know you’ve seen one once. I have a couple kicking around in the garage from long ago. 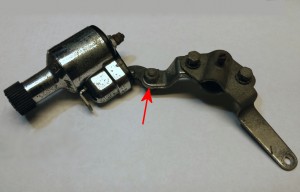 So, I cleaned one up and began thinking about building the circuitry needed to produce a 5v USB charging source.

Meanwhile, I came across a all-in-one solution, only money required.

It was a Pyle PBDNC10 and I found it on Amazon.

Well, in the interest of simplicity and cutting haywire, I decided to order it. It was only $35 and was basically a bigger “bottle” generator with all the circuitry built in. Just plug a USB cord into it and ride.

When it arrived, I started to install it on my Tour Easy long-wheelbase recumbent. I chose that because it was close to a “regular” bicycle where the seatstays are next to the wheel and where such a generator needs to be mounted. If I tried to put it on my Catrike, there would need to be a lot of improvisation to mount it on the big tubes on the aluminum frame.

I had two stays on each side, one very thin and the other a bit thicker, maybe 3/4″ diameter. Neither was a good fit for the bracket, but I started trying to mount it on the larger one.

The first thing I noticed, was it was all wrong every time I tried to line it up. It ended up having to be below the stay, backwards ahead of the wheel. Thankfully, this was possible on the recumbent. It wouldn’t have worked on a normal bike. 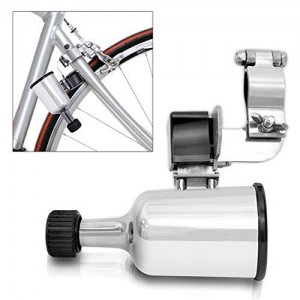 If you look closely in the photo that came from the product page, you’ll see that the example isn’t even lining up right and would never contact the wheel right so it could work.

I had to bend to metal clamp to be able to make it fit around the seatstay, but it eventually was mounted and it almost lined up with the wheel. After a lot of fiddling with it, I got it so it would turn.

I pedaled the bike and watched the little LED on it. It did light up, but only intermittently. But then, the thing only turned intermittently too.

This was not looking good, but I was prepared to fine tune it until it worked, if there was any promise. I plugged in a little USB tester I got in the same Amazon order and it was totally dead. It should have at least showed the voltage available on the USB port.

That’s where I threw in the towel and decided to return it for a refund. The clamp bending was superficial and could hardly be seen. If I went any further, I’d have to be cutting things, or opening it up and I figured that would be kissing $35 goodbye.

It’s a good idea, but Pyle’s implementation falls short. The bracketry is all wrong. It fails to account for varying sizes of tubing used on bicycles and differences in the angle needed to contact the tire to impart the turning forces needed.

One thing that wasn’t apparent in the product description, but is mentioned in the documentation with it, is that it has a 700mah 3.7v Li-ion battery built into it. That makes some sense, but I could find no evidence of it from it’s operation! 700mah is tiny compared to the 22500mah (22.5Ah) battery pack that I would have been keeping topped off with this generator.

If you look at the photo of my old garage-salvage bottle generator, there is a red arrow pointing to a joint that allows the angle to be adjusted for any situation. They knew enough to add that back in the ’70s; it should be automatic today.

So the Pyle is going back to Amazon and I’m going back to building the circuit to use the old generator. Stay tuned, I’ll let you know how it works out.