and it makes phone calls too… 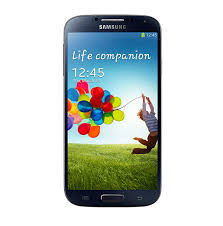 I got a new cell phone today; it’s another Android smartphone, a Samsung Galaxy S4 or SIV, whichever you prefer. It’s a pretty sweet phone, according to everyone in the know on such things.

I started out just looking for a replacement for my old HTC Incredible, which had gotten pretty long in the tooth and no longer was working right. I’d done everything I could to keep it going, but it had a fatal flaw that ended it’s time: a critical part of it’s memory, one that could not be upgraded because it is hardware, was just too small and as the operating system and apps got newer and bigger, it could no longer handle it anymore.

I started out with a few criteria in mind. It had to be a smartphone, and an Android phone specifically. I thought about a Windows phone, but with the number of apps I have already bought in the Play store, sticking to a droid made sense.

It had to have a decent battery life, or at least an interchangeable battery. That’s a lot to ask with a smartphone. Most barely get you through an eight hour day, so interchangeable is an acceptable compromise.

I also wanted a screen that I could read in bright sunlight. My old phone failed miserably in that respect.

Wi-Fi tethering and unlimited data plan were also criteria, but I had to give them up, at least for now. Verizon is pretty relentless on those profit centers.

So I did a little research and went in with a few phones in mind. A couple choices just weren’t available any more, but the Samsung S3 still was.

And I probably should have gotten the S3. It was only $99 (with a two-year contact) But lo and behold, the latest, greatest, newest model, the S4 had just come out and I don’t know why, but I had to have it.

Maybe it was my experience with the Incredible, where I got left behind because of its old design. I just wanted to get ahead of the curve for a while and have something that won’t be outdated for a while. I had the Incredible for about four years (an eternity in cell phone life) so I guess I thought if I made that kind of commitment again, it better be the latest.

So, I paid another hundred bucks, bringing it up to $200, and got the S4 over the S3. What is the difference? Not a lot. The S4 has a faster processor, a quad core vs. dual core and a better camera. And a bigger screen – by a whopping eighth of a inch. Unless you actually hold the two phones against each other, you can’t see the difference. Why bother? Well anyone who upgrades from the S3 to the S4 had to buy new accessories. The old cases and screen protectors won’t fit!

So, how is it? Well, being the latest version of Android, it’s remarkably like my Nexus 7 tablet. But between Samsung and Verizon they loaded it up with their own proprietary crapware which is really annoying. Some of it can be removed. Some can’t be, but can be hidden. Eventually, I’ll be able to root it and get rid of it all.

Since it is an Android device, once I got it going, I could install all the apps from the old phone easily. Getting started was the trick. I don’t know my Gmail password. You can’t do anything on an Android device without logging in to Google. Why don’t I know my password? Because I use a password manager called Lastpass. So, install Lastpass. No, you can’t install anything until you log in to Google to access the Play store! Oh well. I had to look up my Gmail password on an actual computer and enter it manually. Once I did, the Android world was unlocked and life was good.

Actually, a lot of the app installs were easier done from the computer desktop. I went to the Play store and was able to see all the apps on the old phone and send them to the new phone to be installed. Pretty slick, Google.

So, how do I like the phone so far? It’s pretty early to tell about some things, but I like the phone. The battery doesn’t seem to be any worse than the Incredible, so I can live with it. I’ve already ordered a charger and spare battery.

Screen visibility in sunlight is one thing I haven’t tried yet. I don’t know if it will be better or not. I may be wishing for the impossible, but maybe newer screens are better.

The camera is really nice. It’s some ridiculous amount of megapixels that totally disregards the pinhole sized lens, but that’s marketing. I always said a camera is not important to me in a phone, but considering how often I use it, just because I have it with me, maybe it should be. It’s supposed to have that fancy software that does things like do panoramic shots and let’s you choose between several images taken in a burst mode, but I haven’t played with that yet.

Upgrading my phone meant a new contract and I had to lose my unlimited data plan, but looking at my usage, I shouldn’t have any problem with the monthly quota. The thing I really want to keep is the wifi tethering. Verizon put it into the phone, but want to charge $25 a month to use it. No one does that. I’m surprised they still try to sell that. My old phone was the same way, but I got around it by rooting it. I’ve already found an app for the S4 to enable it. You may be wondering why tethering is so important to me, well it’s really nice to use my Nexus 7 with it.

It’s amazing how little the actual ability to make phone calls enters into the decision process. Yes, it’s a phone. It makes phone calls. It has a dialpad and contact list, but it’s virtually unchanged from the old phone. Nothing new there. I actually use the phone part of it very little. It’s a phone, but it’s more my watch, alarm clock, address book, camera, social media tool, research assistant, buying guide and toy, than it is a phone.

Only time will tell if I love this phone or only like it. I think it’s safe to say I don’t hate it, or I’d be thinking of returning it by now. I’d better like it, I’m stuck with it for two years.

2 comments on “and it makes phone calls too…”