And the next bike light is… 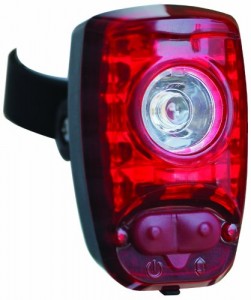 I heard good things about this light in some cycling groups I was reading, so I thought I’d give it a try. I spent some Discover Card cashback bonus and didn’t hurt the wallet too much. It sells in the $28 range, so even full price would not be bad.

So here’s the deal, why would I need yet another bike light?

Well, other than I have become interested in following the topic, using a very bright light, one bright enough to attract attention in bright sunlight, is the second most important thing you can do to keep safe when riding your bike on the road.

Well, riding where you can be seen, in the middle of the lane, if possible. Cyclists that hide off to the edge get hit. Even distracted drivers manage to not hit what is in the middle of the road in front of them when they glance up occasionally, especially if there is a bright flashing light on it to grab their attention.

It’s easy to make a LED light that looks impressive at night. But to be of any use at all in the daytime, it has to be extra bright. Only a very few meet that standard. Anything else, is wasting batteries. This one makes it into that elite level.

The choices in bright – as in bright enough to have any impact in bright sunlight – lights have been few and they are expensive. Unnecessarily so. I’ve felt for some time that with advances in LED technology, it was just a matter of time until someone with the industry connections to mass produce a bright light with some economy of scale would make it happen. My guess would have been Cateye, and I’m still hoping, but Cygolite seems to have beat them to the punch, while Planet Bike has been sitting back, resting on their laurels with their mediocre Super Flash lights.

At well less than many other bicycle tail lights, the Hotshot comes out almost as the equal to my several-year-old Dinotte 140R. In all fairness to Dinotte, their fresnel lens does a better job of covering a wide angle of the rear, and they have newer, better models in the market now as well, but unfortunately $200 is out of the price range of most cyclists. You can buy four Hotshots for half of what the new Dinotte Quad costs.

Side by side, I’d call them equal in brightness, but you need to be very careful to aim the Hotshot because the beam is narrower than my old Dinotte. The Cygolite has a bunch of flashing modes, including solid, and allows you to vary the speed of the patterns as well. This gives you an almost unending collection of patterns. In the solid pattern you can vary the brightness.

As an aside, you can’t really vary the brightness of an LED. It is either on or off. What they are doing is flashing the LED so fast that it looks like it is on all the time to the human eye. When you vary the duty cycle, or percentage of the time that it is on vs. off, it looks like it gets brighter or dimmer. Cool trick, literally, because these high power LEDs generate heat and would burn up if they were powered on 100%. It’s a balancing act between bright and cool.

It’s also of the new generation of USB-charging lights that use Li-ion batteries and charge off a USB cord. I’ve thrown in the towel and gone with it, and have built a charging station in my garage with an outlet strip and I have four USB jacks and a bunch of cables for charging bike lights. This meshes with my 5-volt solar charging system. I’ve created a Google Doc that compares some of the lights I am currently using. I wish I could put a photo of each light in it, but when I do, it comes out as a floating image, not fixed into a cell in the table. If I figure out how to do that, I’ll add pictures.