First of all, if you’re not up for some serious geekiness, tune out now…

I’ve spent the last few days building up an new computer. Did I need one? Probably not, but this one is unlike any I’ve made before in several ways and it didn’t cost a whole lot either. It’s, so far, turned out well, though not without some tribulations along the way. 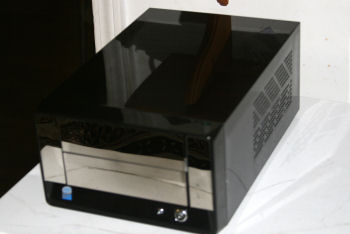 Here’s a photo of the finished CPU. It is the smallest computer I’ve built. It’s a Mini-ITX formfactor with a motherboard only about 8 inches square. 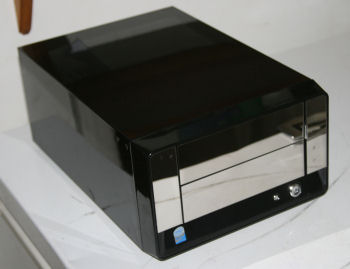 Another view. The photos are a bit hard to see much other than the front panel. There isn’t much else to see anyway. The case has a beautiful, glossy finish and the front panel has mirrored pieces that cover all openings. You could say it’s shiny and not be accused of being a Firefly fan. 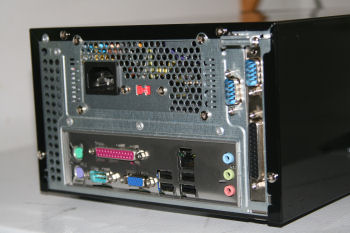 The back panel has all the necessary connections. Ethernet, USB, serial, parallel, sound. I added a multi-IO card in the one PCI slot to add more serial and parallel ports. Why? I know, nobody uses them any more, but the first plan for this box was to be a small, very portable logging computer for Ham Radio. That usually requires a parallel and serial port for each radio. This would give me enough for two-radio contesting with one serial port to spare, possibly for packet. Will I ever use it that way? Judging by the amount of contesting I’ve done lately, no, but you never know.

I could always remove the card and use the PCI slot for something else, if needed. (Maybe a TV tuner card?) 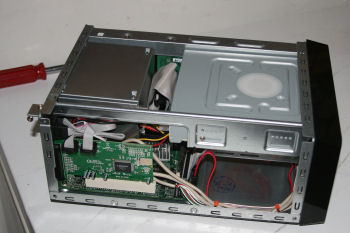 The box is jammed full. At first, I was surprised by how much room was left over. Then I added a CD/DVD drive. At first, I wasn’t going to have one. I had installed all the operating systems using a USB CD drive.

Then I got the smart idea of making it into a Hackintosh box. That’s a PC running Mac OSX. Since Apple started making their computers with Intel processors, they could, in theory, run on any PC. It didn’t take hackers long to figure out how to do it. But the OS loads from a DVD image and I don’t have a USB DVD. So, since I had to get some way to install from a DVD, I spent a few more $$ and got a CD/DVD burner.

The DVD drive was a tight fit. It won’t go in from the back/inside of the case, even with removing the power supply. (something you have to do install the motherboard, anyway.) The front panel comes off easily, though and the whole thing slides in from the front. The mirrored door that hides the drive opens and shuts on a small spring as the drive pushes it. A little mechanism depresses the eject button if you press a little tab between two of the mirrored panels. 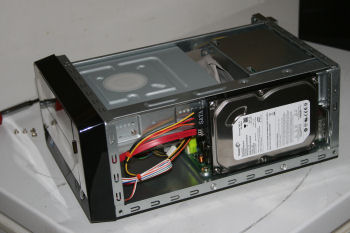 Here’s the other side showing the hard drive. It’s a 2.5″ mounted on it’s edge. It’s also a SATA drive and it’s the first time I’ve used one of them. With 160 GB, it should be roomy, but once I started thinking about multiple OS’s and prtitions, I wish I had gotten a bigger drive.

The only room left in the case is under the CD drive. There is a floppy bay there, which I didn’t use and it could hold a second hard drive. It would be a bear to get at, though. 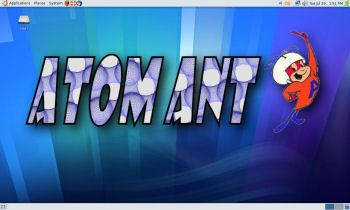 Here’s the desktop while running Ubuntu Linux. I’ve tried to like Linux many times over the years, but have never gotten comfortable with it. My first attempt at Linux (years ago) was an install of Slackware Linux where it took several hours of feeding it CDs and reading text on the screen to answer prompts. It was all command line and you had to know exactly what your hardware was down to chip numbers because it couldn’t tell on it’s own. I’ve tried and tried again and again to like Linux. Mandrake/Mandriva, Suse, Knoppix, Red Hat/Fedora and more. Each one I tried got better. It’s not that I was getting smarter, or that one type was better than the other, but as time went on, the installs got easier and the Linux packages got better and better. I’m finally happy enough with this install of Ubuntu (7.10 for those knowledgeable) to leave it on the machine and use it.

I’m far from comfortable using it, but I’m light years ahead of where I was at a few years ago and I can actually use it for most things I need to do. That’s the key to learning to get better at the small details you learn as you go. You can’t learn, if you’re not using it. 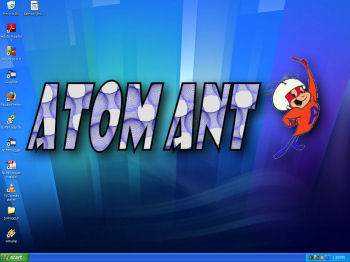 Here’s the desktop under Windows XP. You might notice it’s the same wallpaper as in Linux. But whats with the Atom Ant? Well, the motherboard is an Intel DG945GCLF with an Intel Atom processor. It’s a 1.6 Ghz processor, multithreaded, etc, blah blah. You gearheads can look it up yourself. I gave it 2 GB of DDR2 RAM as well.

We have a habit of naming computers in our little home network. Actually, it’s not a habit, it’s necessary for them to all communicate. The first computer I built became BLUE because it was a IBM Blue Lightning motherboard. It was a 386 and has passed on into history long ago. It was replaced by BigBlue. After that, we named some after pioneers of computing. I still have a Babbage running. Touring came and went after we found out he was gay. Maybe that was harsh. I also have one running my webserver appropriately called Bernerslee. I’m not quite ready to name a computer Gates or Jobs yet. Maybe Wozniak.

But we’re running short of old historical names and tired of it too. We’ve strayed far from the computing pioneers theme. The last computer I built is called Smokin. We have one called Family. I have a laptop called Laptop and another called Compaq. I guess I’m just running low on imagination.

This one is called AtomAnt as a play on the Atom processor and it’s small size. The cartoon character was conveniently adopted.

I haven’t got the OSx86 (Hackintosh) running on it yet. That’s not as straightforward as the ‘legal’ operating systems. It’s going to take a few tries to get it loaded and working. I’ve had it install, but when it is rebooted it dies and doesn’t run. It also resets the bootloader every time, so I lose Windows and Linux until I repair the GRUB boot loader. But people have gotten it to work with this exact motherboard, so I’m hopeful of creating a universal do-it-all box.