Battery packs for the Pixel Pole

This page is about information on what battery packs can be used with the Pixel Pole LED lights. 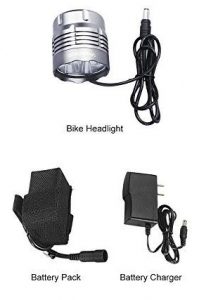 The Pixel Pole was designed to work with the common 8.4 volt DC Lithium Ion rechargeable battery packs that are available for powering bicycle lights. While usually meant for headlights, they provide a good voltage and plenty of capacity for the LED strips.

The Pixel Pole can be powered by as low as around 5v. The Arduino module as well as the LEDs run at 5v. In fact, I have a 5v regulator inside the module to supply power for the LEDs. I have tried it using a standard USB battery power booster and it works well that way with an adapter cable. It probably can be powered by a 12v nominal source, but I wouldn’t go too much higher. Extra voltage is wasted as it is converted down to a lower level.

With that range of options, I chose the 8.4v pack because:

I wanted to be able to provide a complete package to those buying the Pixel Pole, but logistics get in the way. The first casualty was the flag pole. The cost to provide one flag pole was not insurmountable, but the shipping and packaging was. Since you can get one at almost any bike shop or Wal Mart, I left that up to the end user. Most people already have a flag pole anyway.

The battery packs were a different animal, though. To get a good price on the packs and chargers, I ordered them from China. The shipping ended up being equal to the cost of the parts.  You can order one item and they’ll give you free shipping, but order 15 and you foot the bill. Lesson learned.

And that lesson is, even though they might cost more domestically, you’ll save in shipping and shipping time, if you stick to home.

Here’s some examples of these battery packs I found easily by searching Amazon:

I’ve found that running the Pixelpole off of a USB battery pack works well. I hadn’t thought of that initially, but someone asked me if it could be done. I didn’t think it was a very good idea at first, but after considering it, it actually is.

I designed the Pixelpole to operate at 5V. The LED strips and the Arduino board are designed for that voltage and I worked from the assumption that they would need a higher voltage supply to regulate down to 5v from. The 8.4v packs are ideal that way.

The USB packs are a bit different. Initially, I thought 5v from the USB bank would be marginal and would work with a fresh battery, but drop out as the pack discharges well before using its full capacity. I was forgetting one thing. The USB packs are built around 3.7v lithium cells. They use a boost-buck regulation circuit that brings that up to 5v for the USB standard. So the output is always steady at 5v no matter what the state of charge inside it is. The regulation in the Pixelpole becomes a bit redundant, but does no harm.

These battery banks/packs/chargers are so common now that I’m not going to attempt to give links or make recommendations, but just give some examples of what to look for.

One comment on “Battery packs for the Pixel Pole”