While outfitting my new bike, I had to choose a taillight for nighttime use, or in case I get caught out at dusk. I’ve always used a blinking LED taillight in the past and they are pretty good at getting you seen in the dark. The flashing LEDs really stand out. But this time I wanted a little more because the recumbent is so low to the ground and might not be recognized as a moving object in the dark.

I had seen some lights that were really bright, so much so that they are actually of use in the daytime. I went in search of one online. It’s really hard to get real information about how bright these really are. You can see photos or watch YouTube videos, but because cameras adjust to the light available, they all look blindingly bright individually. Only side-by-side comparisons are useful. They’re hard to find, though. 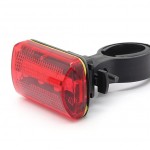 Typical generic LED tailight You’re probably familiar with lights that look like this. I’ve had dozens of them in the past and recently threw away a bunch that had quit working and couldn’t be revived by new batteries. Some are good quality, others are cheap knock-offs, but they’re all about as bright as the other. I bought four of them a while ago for $1.25 each at a flea market. 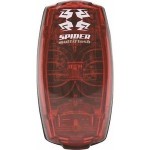 Bellsports Spider Flasher I found these lights for sale in Wal-Mart and bought a pair of them for the trike. I put one on each side of the back of the seat and was pretty happy with them, even though it took several strips of old inner tube and electrical tape to make the mounting bracket fit the smaller tubing on the seat. It’s sized to fit on a conventional seatpost.

They have one bright LED and a plastic thing that channels some of the light out the sides for a wider angle. Sort of a light-pipe. The LED is bright, but not daylight bright. 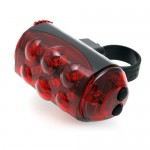 Cateye TL LD-1100 I had read a lot of comments on this light in some cycling forums about how good it was, so I ordered one the next time I put an order in to a bike supply.

The TL LD-1100 is really two LED flashers in one case. There are two rows of LEDs and two switches to control them. There are five or six modes the flasher can operate in and because they are independent, you can have each row use a different pattern. This is good because there is some controversy about whether a flashing light throws off depth perception in the dark. You can have a solid light and a flasher all at once.

They also gave side visibility some thought too. There are side-facing LEDs at each end of each row. The unit is solidly-built and feels nearly indestructable.

All that being said, I was really disappointed in the Cateye. It wasn’t bright at all. If you get right in line with the lenses molded in front of the LEDs, they might be acceptable, but from other angles, it’s merely mediocre. For one thing, the plastic seems to be dark and the LEDs just aren’t that bright. They could improve it by putting a good 1/2 watt LED in the middle of each row, but didn’t.

Update: It seems that I was wrong. It turns out the batteries, two brand-new Duracell AA Alkalines, were the problem. One of the two, brand-new, cells was bad, so it was operating off only one cell! I put some other batteries in the light and it was blindingly bright after that. They were the batteries that came with the light. I also tried two other new alkalines and got the same, bright, results.

I had planned on putting it on the reflector bracket on the bike’s rack, but the screw provided was too long for the thin bracket and the screw broke the plastic boss off the back before it got tight enough to hold it. I put the belt clip on it and tried it on the strap on the back of my trunk bag, but the weight of the light made it point downward and it was useless. I put it on the back of the seat, but the bar goes at an angle and it looks weird. The LD-1100 is really meant to sit horizontally because of the small side-facing LEDs. I’ll have to make a bracket for the rack.

The LEDs are not quite as bright as the 1/2 watt Planet Bike one, but all-together, they are at least equal. I can see now why this light was highly recommended in the online forums I read. 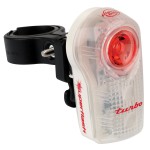 Planet Bike Super Flash Ultra Bright I picked this light up at a local bike shop as a headlight/taillight combo, but it’s sold widely as just a taillight as well. It’s marked as having a 1/2 watt LED and I think that’s a good balance between brightness and battery life. I don’t know what that translates into in Lumens, but it’s hard to look at.

This light is bright enough to be an asset even in daylight. The top LED is behind a clear lens that spreads it’s beam out in a cone to the rear. There are two dimmer, but still bright LEDs below that. In blinking mode, they alternate with the bright one, so that the light is always illuminated. A steady mode uses just the top, bright LED.

You have to see this to believe it. When on steady, it makes the whole red plastic case just glow. It really stands out, even in daylight, to drivers approaching you from behind. Mission accomplished!

The headlight isn’t bad either. I mounted it on a Minoura Swing Arm just above the pedals (out in front on a recumbent) and while I haven’t ridden at night with it yet, it’s handy to have on even at twilight or on a shady road on an overcast day. It also has the choice of steady or flashing mode and I think the flashing mode is very useful to be seen. I’ll save the steady mode for when it’s actually dark. 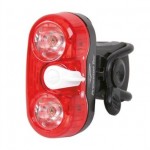 Princeton Tec Swerve LED Taillight I haven’t actually tried this light, but it looks to be just as bright or brighter than the Planet Bike one. It claims to have two 1/2 watt LEDs in it, one focused and one diffuse. Seems like a good combination. It has a mounting system that consists of a stretchy rubber band, sort of like an O-ring, and a piece that looks like it can angle in any direction. That would be a real asset on the back of the trike seat where the bars go at some complex angles. 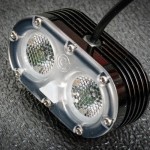 Dinotte tailight For the ultimate bright taillight, you have to consider the Dinotte 400R. A friend told me about them on a club ride and from everything I’ve read, they are the way to go. Dinotte makes a whole line of super-bright bicycle lights. They all operate from a battery pack mounted on the bike somewhere with a wire to the light. Their philosophy seems to be to blind the driver of an overtaking car so that they avoid you…