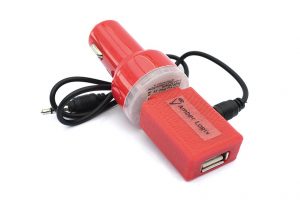 A little over a year ago, when I bought a used car, I was disappointed to find that the factory stereo it came with didn’t include the bluetooth option. It had the XM Radio, the OnStar with the ability to make phone calls hands-free, but not bluetooth. I searched and searched online for information to see if it could be added or upgraded, but nothing I found was authoritative. There was some indications that a module could be added or upgraded way down under the dash, but different sources gave different information about the modules location and even if it was available to buy.

I’m sure I could have taken it to a dealer or a car-stereo shop and had something done to upgrade, but it wasn’t hard to see that it was going to cost a lot of money.

There was an auxiliary audio input jack that I could use, so I got a cable to plug between the phone and the jack. For long trips, it was nice to listen to music from my phone and I eventually turned off the XM Radio service and it’s $55 a quarter fee. The phone sits in a holder in the center ‘hump’ cup holder so I can see it for navigation purposes.

The Aux In jack is buried deep in the center console – the box with a lid that pops up to store stuff, kind of like a second glove box – along with a DC accessory jack. I put a little USB charging adapter in there and had a spot for a charging cord near the Aux jack. But I seldom used it because the phone holder also had two jacks of it’s own and a short cord kept the phone charged as I drove.

Fast forward a year or 18 months and I was looking at something else online and came across a site called Tindie that is something like Etsy for geeks. It’s full of maker-type stuff for sale. I saw a little thing the size of a thumb-drive with an audio jack that said it was a bluetooth receiver. It even came with a USB cigarette-lighter adapter and the audio cable. It was the perfect solution for my need and best thing yet, it was only $11.

So, here I am with an Aux Input with a DC accessory outlet next to it in my car, out of the way and perfect for my phone. I immediately – like at 1:00am – ordered it and it came in just a few days.

I immediately went to my car to try it out. It didn’t immediately sync up with my phone, for some reason, so I went inside to try again, plugging it in to a computer for power and looking for instructions online. Of course, it worked just fine and I soon had it linked to my phone and playing through a set of computer speakers.

Back to the car and it worked. Mostly. There is some issues with the cable and I only had one stereo channel unless I fussed around with the jack by pulling the plug out a miniscule amount. I attribute it to the PC-mount jack in the adapter and the plug on the cord being slightly different and the best solution I can think of is to put a small spacer on the plug so it plugs in only to the right depth. A small slice of some plastic tubing, or something should do it. I hate to modify it, but if I have to, I’ll open it up, take out the jack and hard-wire the cable into it.

The bluetooth is typical bluetooth. One time it works flawlessly and plays with no intervention. The next time you have to fuss with it until you are about ready to throw the phone out the window and drive away. (Do not do this while you drive!) It’s as much the phone and the apps and not a negative about the Amber Logix device. I had at one time found it impossible to get Google Music playing, yet the sounds from the phone were coming out of the car speakers, so I knew the bluetooth part was working.

Another problem I had, and this is something I experienced as well with the cable connection direct to the phone, is a whine from the car electrical system in the background. I got out a ferrite RFI choke and wrapped the audio cord around it until it was mostly wound around the core. It helped a little, but didn’t eliminate the noise. More research online, looking for a possible known problem with my car, or a simple filter that could be bought and plugged in, but nothing found, except something I already knew – this type of noise is caused by ground loops. Instead of looking for a filter to break the loop, why not eliminate the loop in the first place?

That was my ah-ha moment. In both cases, the direct plugged in cord and the bluetooth adapter, I had the phone plugged in for power at the holder in the cup holder. The audio went through the jack in the console, a couple of feet away and undoubtedly with wiring routed under the hump giving off all kinds of noise.

I pulled the Amber Logix out of the adapter in the console and plugged it into the jack right next to where the phone’s power was plugged in. The audio cord barely reached with the ferrite cord taking up a lot of it’s length, but it did, and the noise was gone. Inaudible. I had eliminated the loop – or at least made it very small – by having the phone and the bluetooth adapter powered at the same place.

It’s sitting there now, not in the console, but at the cup-holder, because it’s convenient to get at to fuss with the intermittent plug, but once I get that worked out, I think it will go back in the console and I’ll use a longer cable for the phones power and plug it in in the console. Fortunately, the Amber Logix unit has a USB jack, so it can go right there. 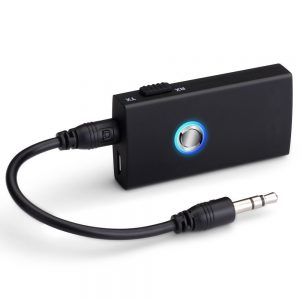 Of course, I was looking around today at something completely unrelated and came across this onAmazon.

It’s similar, except it runs off an internal battery, but could be used the same way to get audio into the Aux jack. It’s also bi-directional so you press a switch on it and it can be used in the other direction to send audio from a device without bluetooth audio.

What a difference a year makes. When I bought my car, the only solution I could find was basically install a new stereo system at a cost of hundreds of dollars. Now, for less than $25 I can get music out of my phone into my car’s stereo wirelessly.