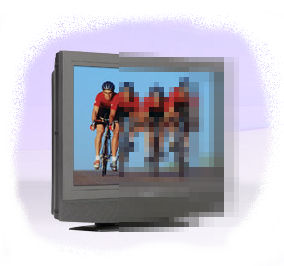 Warning! In February 2009, your TV stations may vanish from the air!

Okay, no I’m not going to nag you like that. You’re probably sick of it already. It’s the change that nobody asked for. The TV stations didn’t ask for it and a lot of them still don’t want it. The networks shrugged and said “as long as we have to spend a lot of money to upgrade our systems, we’ll milk it for all it’s worth – the biggest hype-job since color hit TV.” And of course, the people really didn’t want it. Many still don’t understand it. The big reason for the switch to Digital TV? It takes less spectrum and the FCC wants to have extra spectrum to auction off for billions of dollars.

So, send for your $40 converter coupon and get it. It’s the only thing the government is going to give you while they rake in the proceeds from the spectrum auctions.

But, all of that aside, whether you want it or not, the digital signals are pretty cool. I bought a new TV the other day for the bedroom. I decided to go with a flat-screen LCD TV and got an Olevia 26″ and mounted it right up on the wall. No worries what to put it on and it’s high enough to see laying in bed!

I have a satellite dish for our main TV, but no hookup for a second set, so just to try it, I hooked it up to the old TV antenna I have in my attic. I haven’t used it for TV in years and don’t even use it for FM reception anymore. The antenna is probably less than 10 ft. from the set, but the wiring I had in place for the set goes all the way to the basement. The wire from the antenna goes to the basement too, so I just connected them down there. It’s about 150 ft. of coax to get the signal that 10 ft.

I noticed right away that the reception on analog channels was rough. I could get almost any station crystal clear, but there just was no place I could even get the majority of the Buffalo stations at once. (Half the ‘Buffalo’ stations are in the hills south-east of Buffalo, also roughly south of me. The rest are in Grand Island and Tonawanda, more to the southwest from here.) A lot of Canadian stations are viewable here too, but at other directions as well.

Digital stations are there too. They show up if the analog station is strong. Otherwise, they don’t even get detected. But when they work, they are amazing. They are like any digital transmission, crystal clear, until they vanish completely. There is no noise. Just silence.

I’m planning on revamping the wiring and running a direct line from the antenna. A new, short run should bring signals up a tad. I’ll also pull the rotor cable up and route it to the TV so I don’t have to turn it from downstairs. I’m hoping that I can get things so I don’t have to turn the antenna at all unless I want to watch a Toronto station. Then I will run the output from the Satellite box downstairs to the basement run and I’ll be able to watch whatever is on it upstairs. I’ve ordered a set of X-10 IR extenders so that I’ll even be able to change the channel on that.

I considered getting a second satellite receiver. It would be easily done, but when I think of how little I actually watch on it now, paying for a second box doesn’t have much appeal. What has piqued my attention and may cost about the same or less for much better content is a Roku Netflix box. All I need to do is run a CAT-5 line up here and hook it up. It’ll use that HDMI input on the new TV and I’ll be able to watch movies for less than a HBO subscription.

I might be talking through my hat, but I think once the analog signals go dark, all the power at the transmitters will be put into the digital signals and they will be even easier to get clearly. At the least, any compromises that had to be made to co-site these stations will no longer be needed and the digital signals will be the main product.

In any event, it’s the future of Television and we’d better get on board or go back to listening to the radio. Oh wait, we have that in three flavors – analog, Digital and Satellite – too!