I decided not to build a high-gain UHF TV antenna. I looked into it and while it’s an interesting project and something I may still do, the materials would have cost me more than buying a new antenna, if I did it the way I want to do. That says something for the principle of cost reduction due to mass production. 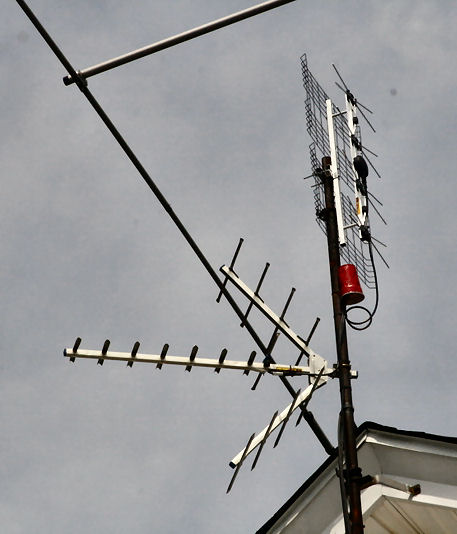 This is what I ended up with. The top antenna, a Antennas Direct DB4, is pointed nearly south to pick up the Buffalo stations in the southern hills. The stations in Grand Island are only 12 miles away and come in with a rock-crushing signal no matter where you point the antenna. You might be able to get a null off the side if you needed to cut them out, but it would take some careful aiming.

The antenna below that, a multi-element corner-reflector yagi from Radio Shack, purchased in the 70’s, but never used outdoors, is aimed at Toronto. Specifically at the CN Tower. Almost every TV station in Toronto is located on the tower, or within a mile of it. That’s just about line-of-sight. I’m sure if they cut down every tree between my house and the escarpment, about a mile away, I could see the CN Tower from my roof. I know it can be seen from an overlook at a park in town on the edge of the escarpment.

The thing that looks like a red plastic cup is a red plastic cup. It’s a rain cover over the splitter/combiner that is joining the feedlines from the two antennas into one. Both antennas have a pigtail lead of coax cut to two wavelengths to reach it. The length is both a multiple of a half-wavelength and exactly equal, to keep things in phase. I’ve noticed no adverse effects from coupling the two antennas this way.

The big antenna in the background is a Ham Radio antenna, a 3-element tri-band yagi. It’s on a roof tower and is actually about 15 feet higher than the TV installation, although from this angle, it doesn’t look like it.

I had planned at first on putting all this on a chimney mount, but reconsidered because the chimney was towards the back of the roof under the Triband Ham antenna. I then considered a tripod at the front half of the roof, but gave up on that idea after a couple shaky trips onto the roof. My roof skills are not up to that anymore. I could have hired someone, I suppose, but opted for the existing, unused, pole at the back gable end. It’s easy to reach from a ladder without getting on the roof. It’s been there so long, that I no longer dare to put much of a heavy load on it, but two small UHF TV antennas are safe there. Plus it had a good view in the directions I needed, especially Toronto. 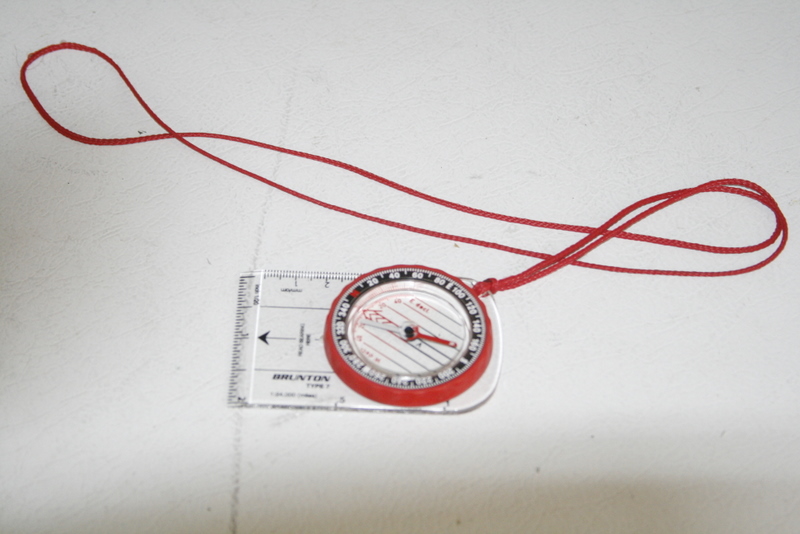 An essential tool for aligning the antennas is a compass. That along with the bearings from some of the internet signal lookups, made aiming the antennas where they needed to be possible. I initially aimed them just by what I thought they should be by eye. The south antenna has never needed to be changed, but then it’s a fairly broad pattern antenna anyway. The Toronto antenna, though, was not so easy. It ended up being further to the west than I had thought. It’s almost NW from here. The compass helped, but I had to get the bearing from somewhere away from the steel mast. It kept throwing everything off, even at arms-length. I ended up on the flat roof below the pole laying a stick at the base of the mast and pointing it with the compass. I then could eye the direction of the antenna by looking down and sighting it against the stick.

So what are the results? Great. I have about 18-20 analog and digital stations. That doesn’t work out to 40 channels, because there are still a lot of duplicates on the air. Next week when the US analog stations go silent, there will surely be more digital stations than analog. The Canadian stations still seem to be in a state of flux. The listings are full of stations that either don’t exist yet, or are on the air, but carrying another station, or just not correct in the listings at all. A lot of them seem to be on the same channels, in the same place (CN Tower) but with different virtual channels, which leads me to speculate they are either shared transmitters, or proposed assignments that take the place of a future vacated spot, or just errors.

But I still get a bunch of Canadian networks – CBC, TVO, Global, Omni1, Omni2, CITY, etc. Some of them I get on multiple channels and I can skip the weaker ones, or just keep the digital channel.

Almost every channel that I receive in DTV now is rock solid. No drop outs, no “off the cliff,” just solid signals. A few of the analog ones are slightly weak, but watchable. Most are duplicates, so they don’t matter. The only one I wish was better is CITY, which I’m getting in analog at about 75% quality, but no sign of their DTV signal. That’s a dissapointment, but I’m hoping something changes in the next two years until Canada’s DTV switch, and I get their digital signal. CITY was the first station in Canada to go digital and offers some pretty decent programs.