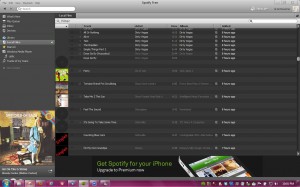 We’ve heard a lot of buzz about Spotify, the Swedish music-subscription service that’s just become available here in the US. They are rolling it out gradually, in a Google-like way. You can short-cut the process if you want to jump right up to any of the pay versions, they’ll take your money right away.

I requested an invitation only a few days ago and received it last night. I’ve been playing with it today. I’m sure there is a lot I haven’t discovered about it yet, but I thought I might mention what I have learned so far.

First of all, what is it? As a subscription service, it supplies music over the internet to your computer or iPhone, iTouch, or Android phone. If there are other devices supported, I’m not aware of them yet. Royalties are paid by advertising in the free version. The pay versions are ad-free. At this time most of the ads I’ve seen were for Spotify itself, even if they suggested a particular artist.

You can type in a title of a song or an artist name, and many results will come up. I had to really try hard to stump it. The speed is quite fast, almost letter-by-letter, which is quite nice.

It also will scan and catalog your local drives for music files. It’s interface is very reminiscent of iTunes and immediately found all the music on my C: drive. When I plugged in an external drive with over 100k mp3 files, and told it to search that drive, it took some time to scan it, but not an excessive amount. Once done, searching through that large database of songs was extremely quick. It is the fastest at finding songs of any program I have used, better than iTunes, Winamp or Songbird, all of which are painfully slow once you reach that number of files.

Spotify only allows the program to work with iPods, iPhones and Android devices in the paid versions. This is curious to me, as I’d think the sooner you get people hooked into using one service on their phones, the better. I would have allowed the phone interface, but limited the on-demand music, but who am I?

I’ll admit, my interest in Spotify is probably rather different than their intended audience. I have a large collection of MP3 music that I prefer to manage, rather than pay to hear the songs. I also don’t listen to music at all on my phone. I’ve never plugged earbuds into my Incredible. It has some music on it, but it’s mostly left from my previous phone and lives on the micro-SD card. I’ve never bothered to delete it.

As for finding new music with Spotify, from what I see, there is no suggestion mechanism, like say Pandora or Grooveshark other than some “New Music” lists at the top page. Instead, it seems to need to have you develop a network of “friends” who share their playlists. Very social, but too much work for me at this point. A search of friends on Facebook only turned up one friend using Spotify. This may get better as more people get their invites.

That then leaves me to using Spotify as a interface to my music collection. I already mentioned that I liked the speed of searches in a large library. That’s about as far as it goes. As a player, it’s pretty weak. You can find your songs. You can make playlists. You can play songs and enque more to play. I was having some fun queueing up a list of songs using the search. It was going well and I had a couple hours of music set up to play, then it abruptly stopped. For some reason, all my queued songs vanished and I was left with an empty list. No idea why.

Another annoying thing is sometimes when you search for a song and play it, it adds an entire album to the Now Playing list. There is no way to remove the unwanted songs, either. All I could do was keep queueing songs ahead of the unwanted ones.

Another thing it really could use, since it’s good at finding songs for your mix, is a crossfade between songs to fill in the silence. There was a very noticeable pause between songs, way more than normal. It was distracting.

If I had no MP3 collection, or if I intended to use it on my phone a lot, Spotify might be useful to me. As it is, it’s main use to me is a player with a really quick search feature. Other then the fast searching, it’s just another in a long list of music players that don’t do what I want or need.

Why can’t someone make a good digital music player? Here’s a quick list of players I love to hate:

Winamp: My favorite, but far from perfect. Plugins and addons make it customizeable, but AOL’s relegating it to a poor stepchild status has left it high and dry. If they had spent as much effort on the player as they did on visualizations and skins, it would really be something. But I really don’t want a player that looks like some steampunk console out of a Jules Verne story.

Windows Media Player: Forget it. Microsoft is clueless and as a music player, I’ve never gotten comfortable with it. It’s the only player I’ve ever seen that defaults to an icon view with album art as the icons. I know some people who do like it, but I don’t like how it wants to go online and download “information” to retag your music. It’s a little better as a video player, but I still avoid it.

iTunes: No. That simple. The windows versions are crap.

Foobar 2000: Open source player that is the rival to Winamp for my top choice. I can do things with Foobar I can’t do with anything else, yet it’s spartan interface and endless versions that are all slightly different annoy me. As does lack of a good media management scheme.